Why I shaved my head

On my 34th birthday, I wound my hair into four long braids.  I took a pair of sharp scissors and lopped them off; one, two, three and four. As the scissors bit into the first braid, I knew I’d made the right choice.  My partner and I then took turns with the clippers, shearing my hair into a fuzzy number 3 buzzcut.  My gift to myself on my 34th birthday was a shaved head, something I’ve been wanting for ages. 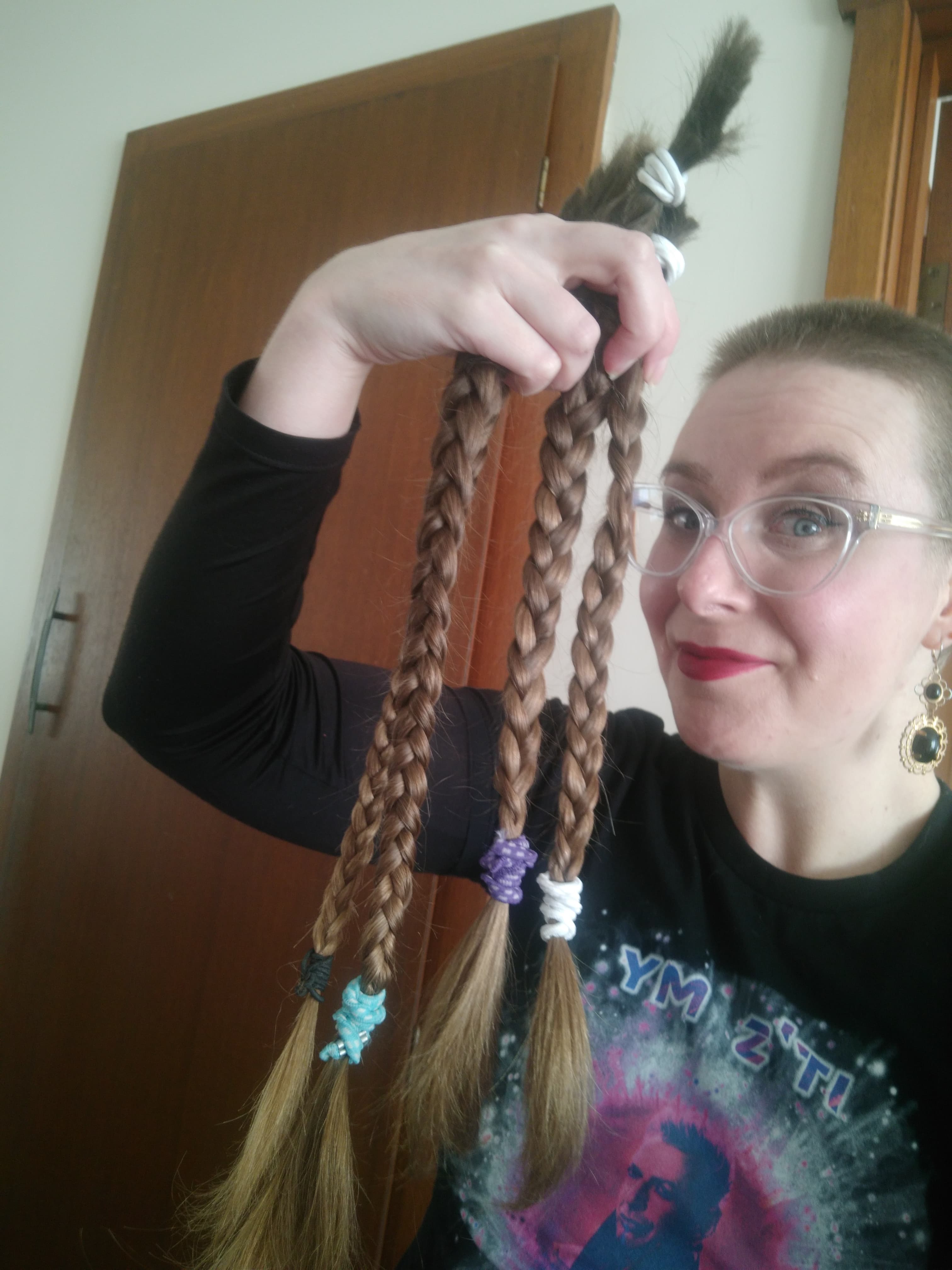 I had first begun seriously contemplating shaving my head at the beginning of April.  This isn’t the first time I’ve thought about shaving, but it was the first time that the thought was more than fleeting.  I journalled about it, I began looking at pictures of women with shaved heads, I spoke to people I knew who had sported buzzcuts in the past.  Then I began thinking about whether I’d do it at home or get a hairdresser to do it. I imagined the outfits I could wear, how I would accessorise my shaved head.  I researched hair care routines and tried to get an idea of how long it would take to grow back.  Slowly over time, I went from rolling the idea around in my head to actually planning it.  I picked a day, made up my mind and took the plunge.

I haven’t regretted it for a moment.  I have had quite a few people ask me why I’d make such a drastic change, why I’d shave off all my hair.  So I wanted to take a bit of time to unpack the reasons why.

Because I wanted to

The simplest reason why I shaved my head is because I wanted to.  I’ve wanted to shave my head ever since I was 13 years old and watched Empire Records for the first time.  When I saw Robin Tunney glide that razor across her head, her dark locks falling into the sink below, I knew I wanted to do the very same thing.  I wanted to crank The Martinis on the stereo and feel that buzz against my skull.  I wanted to experience the breeze on my head, feel the stubble under my fingertips.  I just wanted to go for it.

Shaving my head has been on my bucket list ever since.  I love the way a shaved head looks and feels.  A few years back, I dipped my toes in the water by shaving the side of my head into an undercut.  For five years I rocked the undercut, and every time I buzzed it in the mirror I felt powerful, beautiful and tough.  I thought to myself, “If I feel this unstoppable with half my head shaved, imagine how I’d feel if I did the whole thing”  I had to go for it. 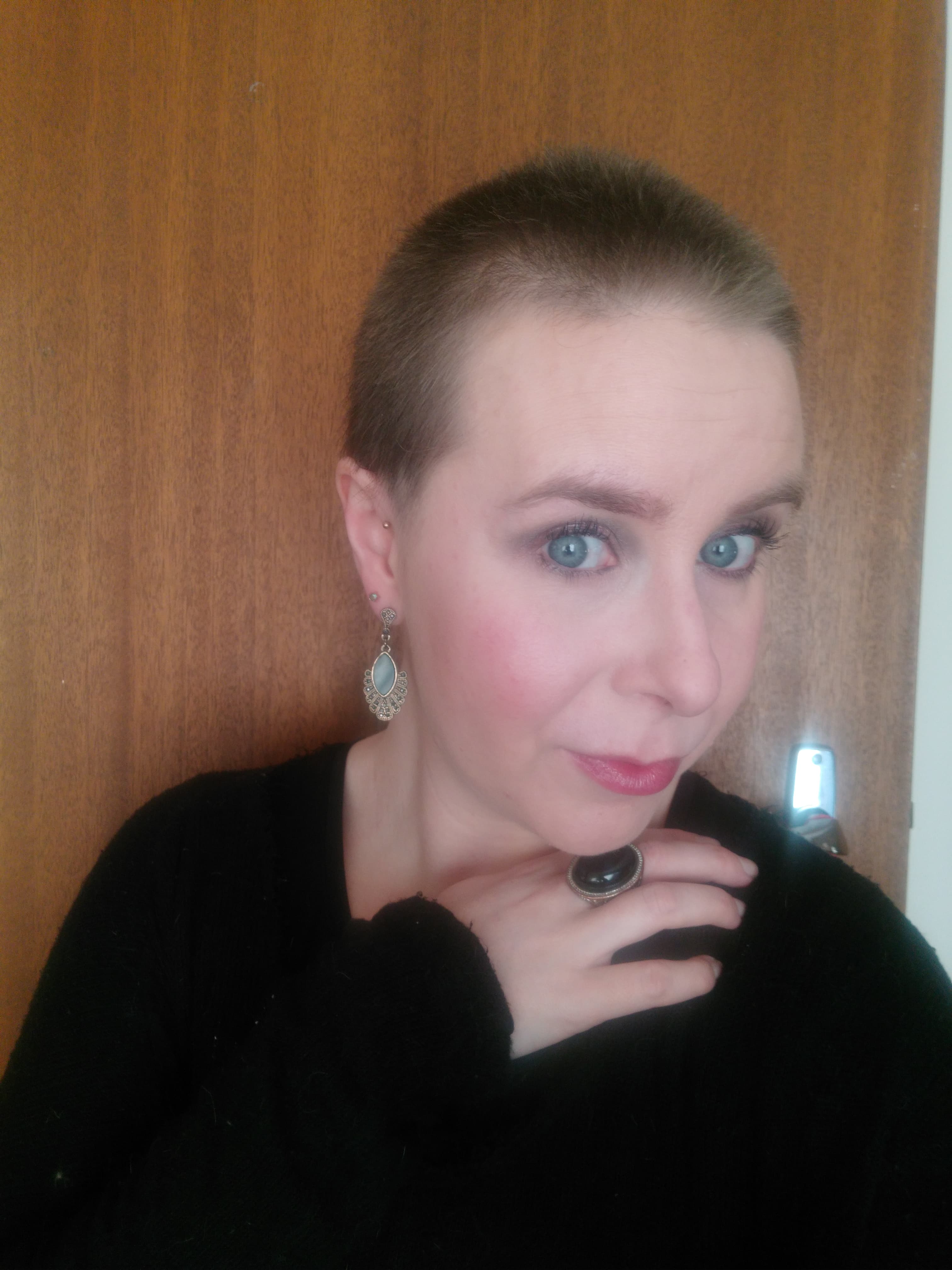 I needed a change

I had long hair for nearly thirty years.  While I grew and trimmed it to different lengths over the years, it was always at least shoulder length. I couldn’t remember what it felt like to have short hair.  And as beautiful as my long hair was, I was somewhat bored with it.  I realised that It was a rare occasion for me to wear my hair flowing free.  The majority of the time I would either pull it up into a bun or wear it in braids.  I wasn’t enjoying having long hair any longer, and I was craving something different and new.

Long hair is hard work.  Every morning I’d have to brush it to smooth out all the tangles. I’d get headaches if I wore it up for too long.  Any time I took a shower I’d have to bundle it up onto my head and twist my neck around to keep my hair out of the stream.  If my hair did get wet, it would take hours to dry.  And for ages I never really minded that.  I was happy to do all that maintenance because it was fun for me.  But for the last few months I had gotten tired of that whole routine. I was sick of catching my hair on door handles, sick of getting a faceful if I tried going for a walk on a windy day, sick of getting it twisted in my scarf.

I wanted the ease of short hair.  I wanted hair that would dry quickly, that wouldn’t need detangling every morning and that wouldn’t catch on everything I passed. 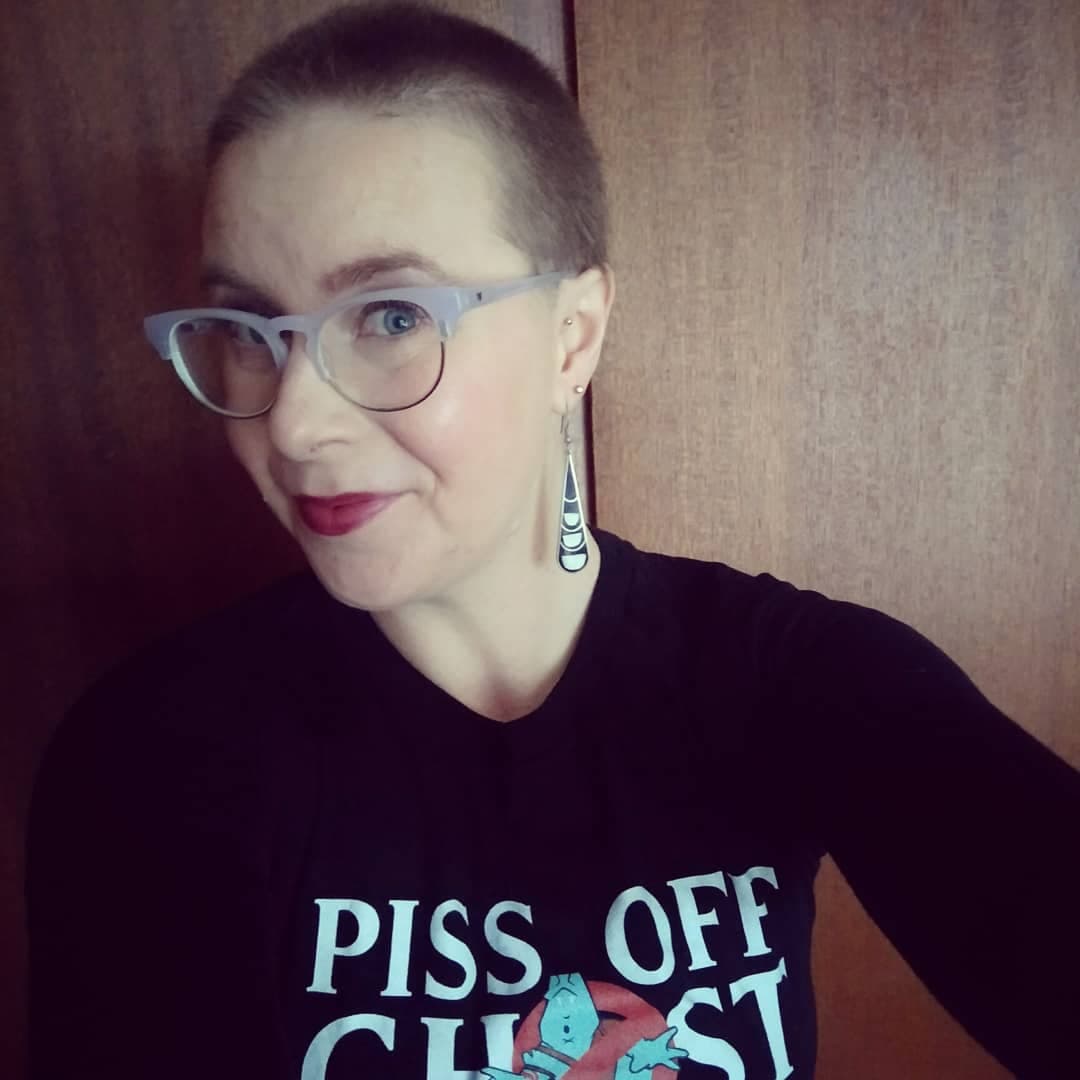 To love myself more

I’m getting older and I’ve got some insecurities about the way I look.  I wanted to do something to give myself a boost, and I craved that confidence I always feel after a new haircut.

I also felt like shaving my head would force me to embrace and accept my appearance.  Without my hair to hide behind, my face is on display for the world to see.  There’s no hiding my uneven skin or the wrinkles that are beginning to form around my eyes, the creases on my forehead or my crooked teeth. It’s all there, bravely stripped back.

Having a shaved head has also forced me to think a lot about my gender expression. I was very concerned that I wouldn’t look “feminine” without hair.  It’s become very clear to me that my femme identity isn’t dependent on my hair.  I have been having a blast with makeup, big earrings and headscarves.  But even when my face is scrubbed clean at the end of the day, I still feel more beautiful than I’ve felt in years.  This has been a leap towards embracing my appearance. 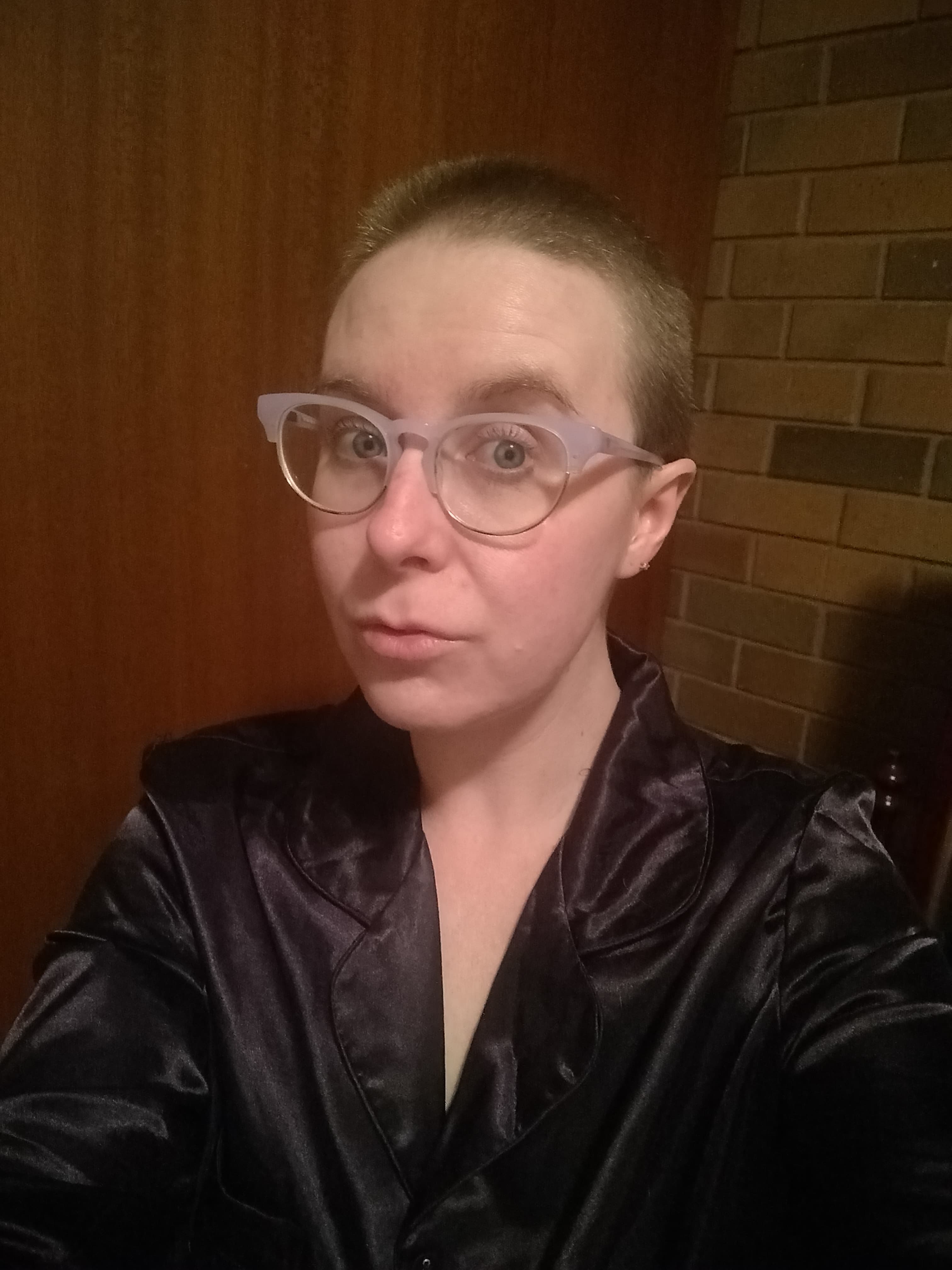 To let go of the past

There’s a reason why a lot of people choose to cut their hair after a break up.  The act of shedding the weight of all those dead follicles is symbolic of starting afresh.  There’s power in the ability to wipe the slate clean and begin again.  These last few years have been a time of rapid change for me, and I feel like I’ve gathered a lot of baggage along the way. For me, cutting my hair felt like a way to shake off the past and step forward into my 34th year fresh and ready.

To do something brave

I am a big fan of doing things that frighten me.  I enjoy taking risks and pushing boundaries to move myself forward.  The feeling of doing something scary and coming out on the other side is invigorating.  That moment of “I did it!” always puts a smile on my face and makes me feel invincible. 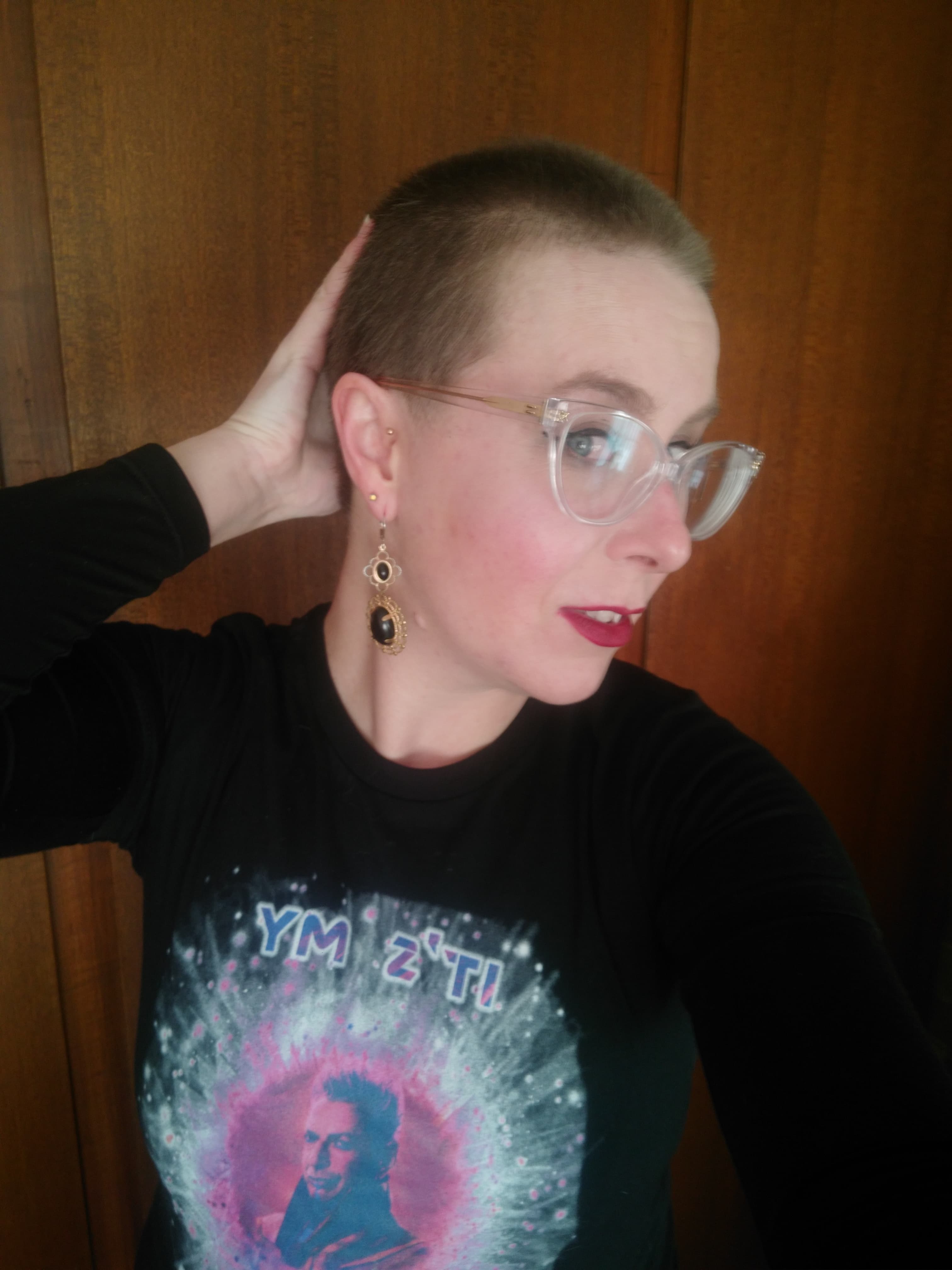 During isolation, I’ve felt so stagnant.  Like many people, I’ve been confronted with a number of scary scenarios: the possibility of losing my job, being separated from loved ones, the fear of becoming seriously ill, feeling unsafe in the most mundane public spaces.  I have felt cowed under the weight of fear and uncertainty.  And I needed to do something to show myself that I can get through a scary time and still be ok.  I felt like I needed to take a (fairly harmless) risk to show myself that I can sit with that fear and come out the other side.

When I picked up those scissors, my hand was shaking.  But I proceeded. Afterwards, standing in the shower, rinsing the last prickling hairs from my neck, I felt like I’d made a really ballsy move. I felt unstoppable, strong and fierce.  That simple act of shaving my head, of stepping towards something I wanted, of feeling the fear and doing the thing anyway, steadied my feet.  I feel strong again, less frightened of the uncertainty around me, because I know I can handle it.