Uberrime is a brand that has been on my radar for a long time.  For about a year I’ve seen pictures of their glorious silicone goodies popping up on my feed.  I decided to treat myself to some new toys as a New Year’s gift to myself.  The first item in my cart was the Bouchon Deux. 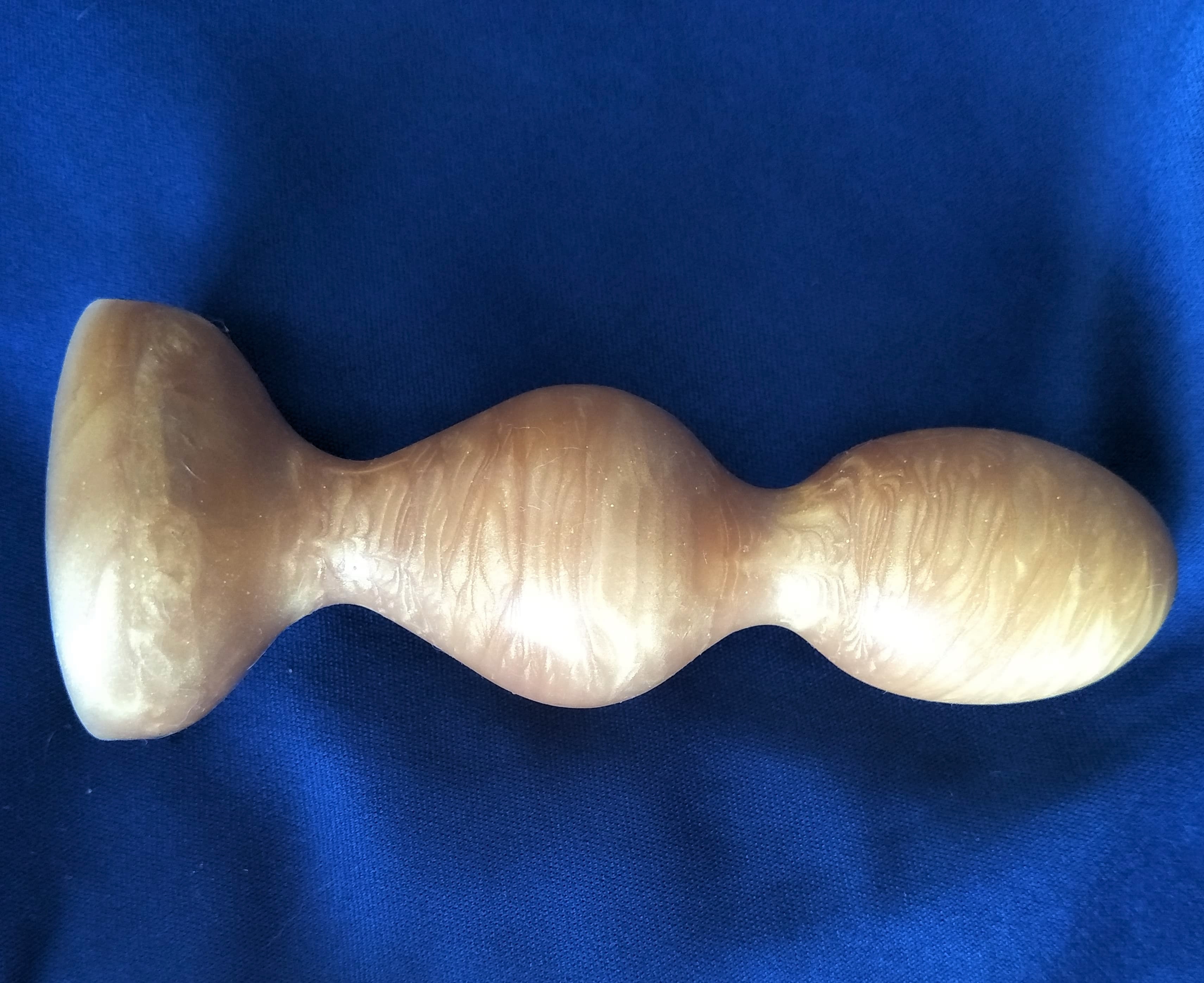 I had a devil of a time deciding which colour to get.  One of my favourite things about Uberrime is the range of colours and designs that they offer.  While most toys come with a choice of one or two colours (usually purple, pink or black) the Bouchon Deux has six shades to select from.  You can have Mermaid Blue, Jack Copper Red, Glittery Gold, Rose Gold, Lavender or Luster Black.  I opted for Glittery Gold because I realised that I don’t have a single gold item in my toybox. 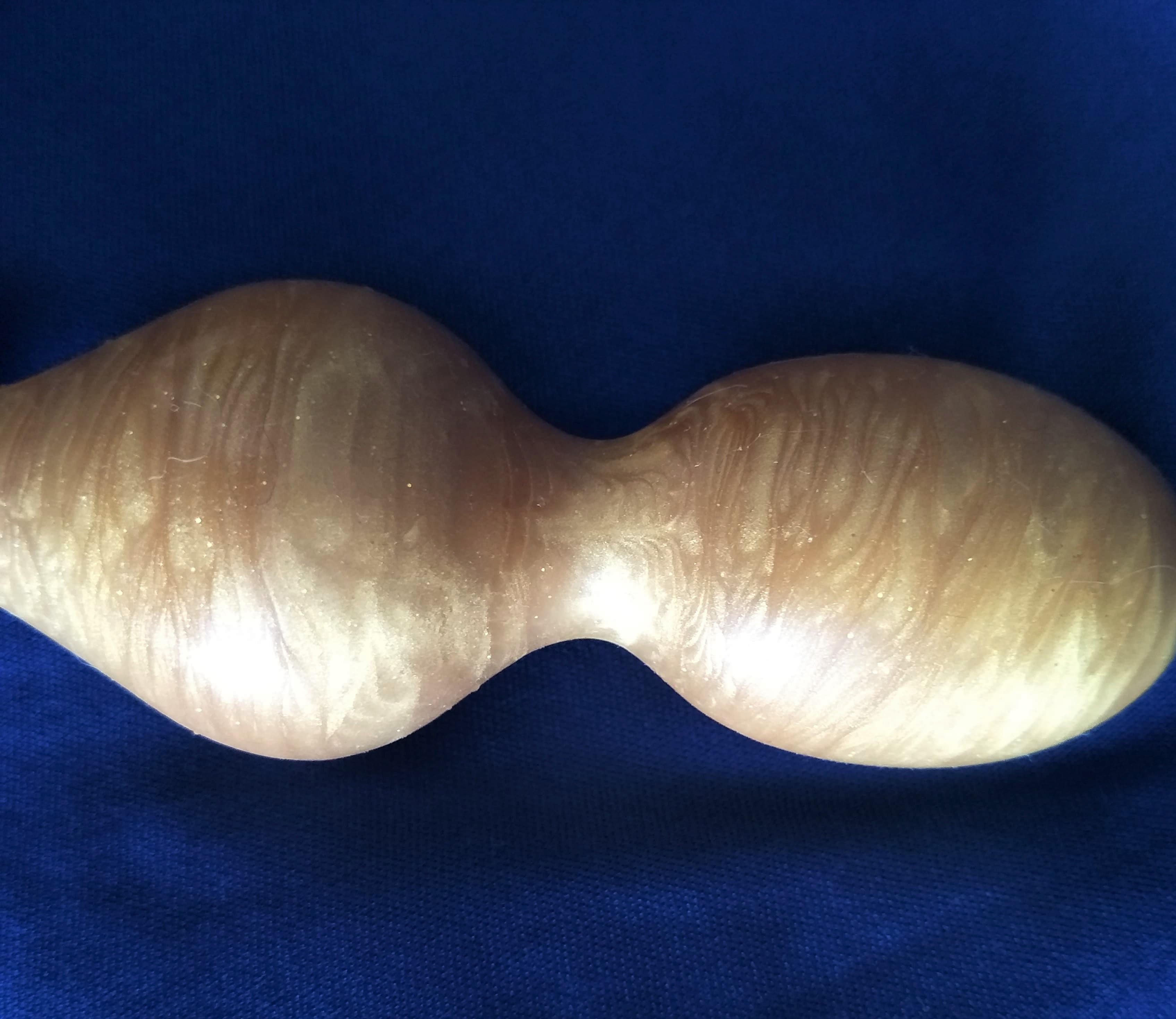 My order took a couple of weeks to arrive, because Uberrime’s items are all made to order.  When I unwrapped the Bouchon Duex, I knew instantly that I had made the right choice.  These toys are works of art.  I’ve never seen silicone look as stunning as this before.  The surface of the Glittery Gold is swirled, with highlights and lowlights that glimmer as you turn it in your hand.  Specks of gold glitter peek out from the whorls of silicone, winking in the light.  It looks like the surface of a distant planet, swirling and glimmering.

The Bouchon Deux is a beautifully designed toy, and the perfect step up if you want to try something slightly more adventurous than a traditional butt plug.  The first knob is slightly egg-shaped, with a tapered tip that widens out and then pinches inwards at the base.  It’s very similar in shape and size to most beginner plugs.  The second knob is wider, with a squat, rounded shape.  The difference in the shape of these two knobs is great, because it provides different levels of play and sensation. If you wanted, you could very easily insert just the first bump.  It’s a great way to ease yourself into more advanced anal play. 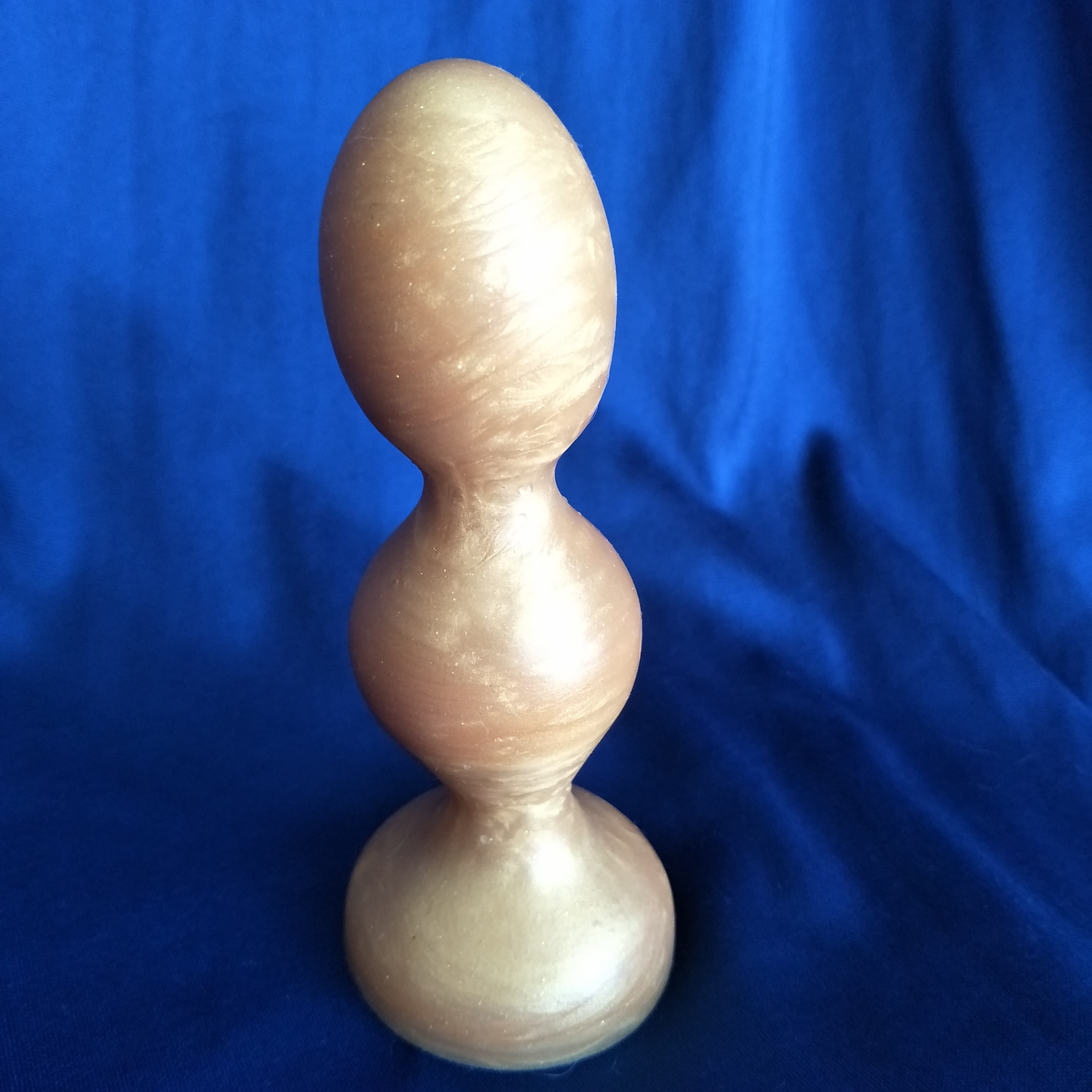 The downside to the softer texture is that this toy is fairly tricky to insert.  The bottleneck between the first and second knob is quite flexible, which means that it’s difficult to get the appropriate amount of force behind it to get it in place.  While you should always go easy when you’re inserting anything in the anus, there is a certain amount of pressure that is needed to push a toy into that tight space.  When the toy was lubed up, it was difficult to grip it and maneuver it into position.  The first few tries with the Bouchon Deux were quite frustrating and it took me a while to get the hang of inserting it. 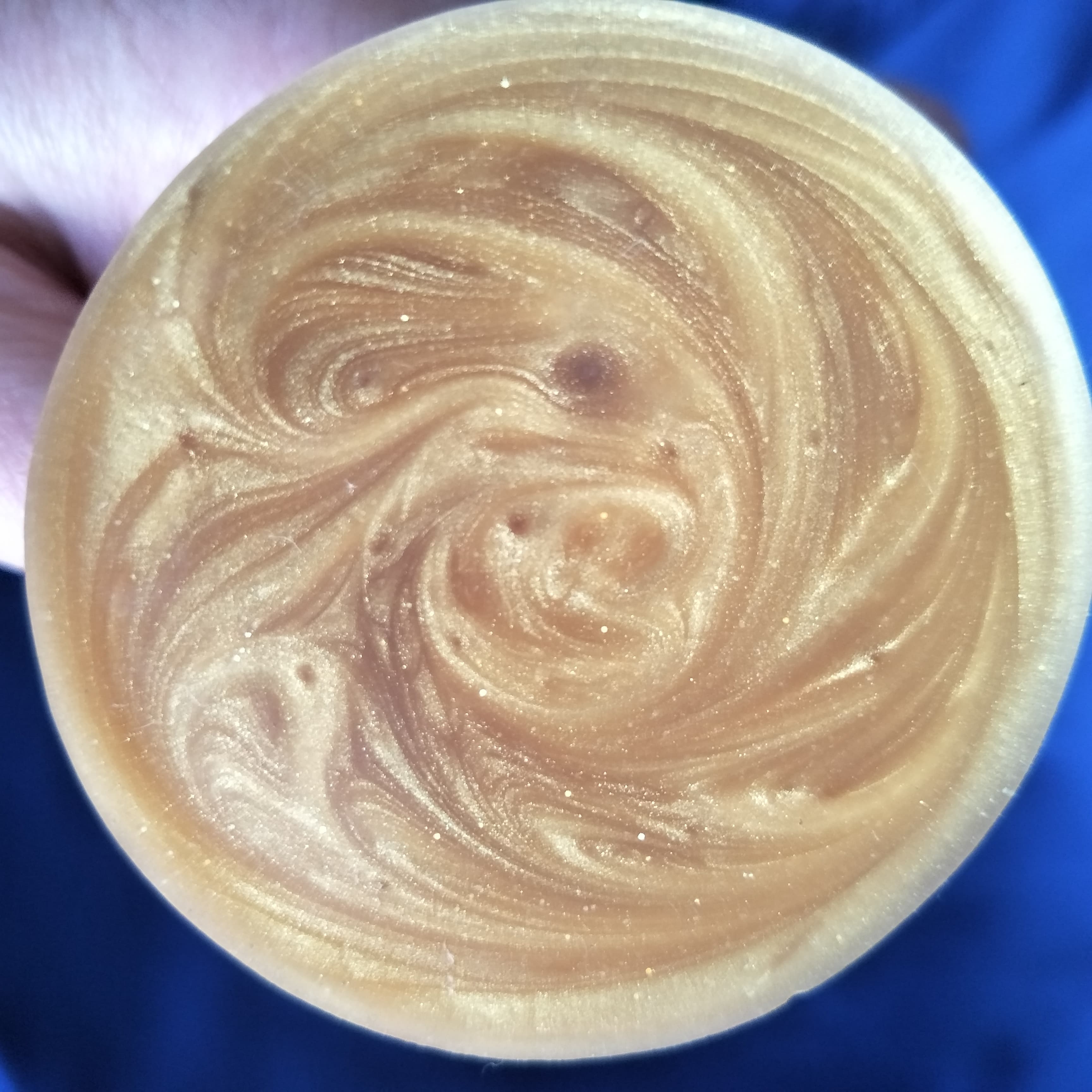 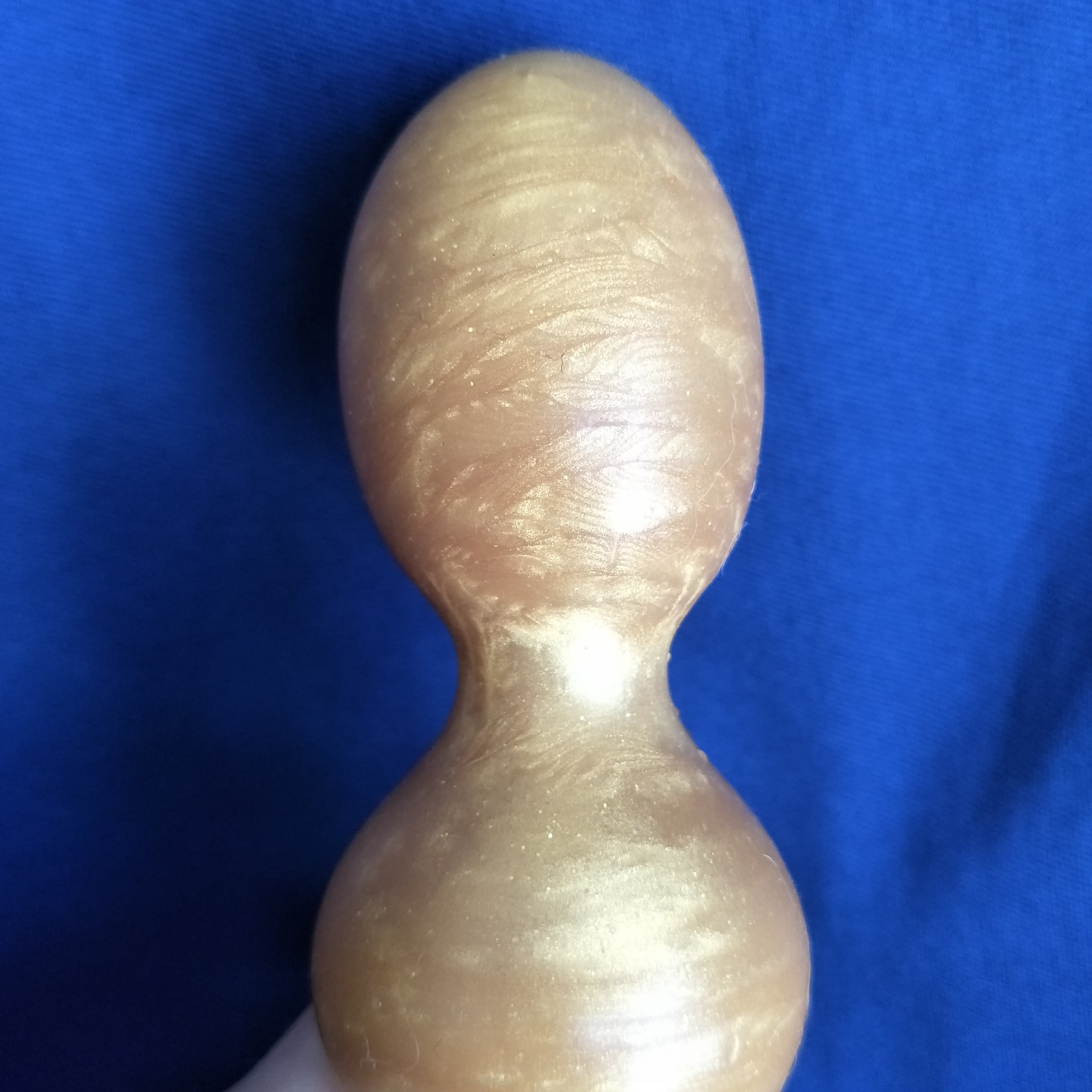 The Bouchon Deux is made of platinum silicone which is non-porous. It can be thoroughly sanitized between play sessions, so it’s safe to use both anally and vaginally as long as you clean it completely between uses.

Overall I was utterly impressed with the Bouchon Deux.  It’s a feast for the eyes as well as an adventurous step up from a traditional butt plug.  If you want to transition your anal play from “beginner” to something more advanced, I would recommend this toy.  It’s beautifully designed and can be used to gradually ease yourself into more intense sensations. It’s great for solo play or partnered exploration and works for all genders.  The Bouchon Deux is a luxury addition to my collection, and I look forward to sharing my other Uberrime purchases with you over the next few months.