There’s been a huge trend over the past few years for sex toys that mimic oral sex using suction rather than vibration.  The majority of reviews I read about the initial wave of these toys said things like “I came hard less than a minute after I switched this on” and “I had the hugest orgasm of my life”.  After hearing such praise, I was keen to give pressure wave toys a try.  The Satisfyer Pro 2 was the first pressure wave toy that I ever used, and it’s taken me forever to get around to reviewing it.  This review has been delayed mostly because I’ve had a couple of other suction wave toys (namely the Sona Cruise and Sona 2) which were sent to me by sponsors and those had to come first.  The other reason I’ve held off writing about the Satisfyer 2 is that it’s taken me a while to really come to appreciate it. Had I written this review eighteen months ago when I first bought the toy, I wouldn’t have had many nice things to say about it. 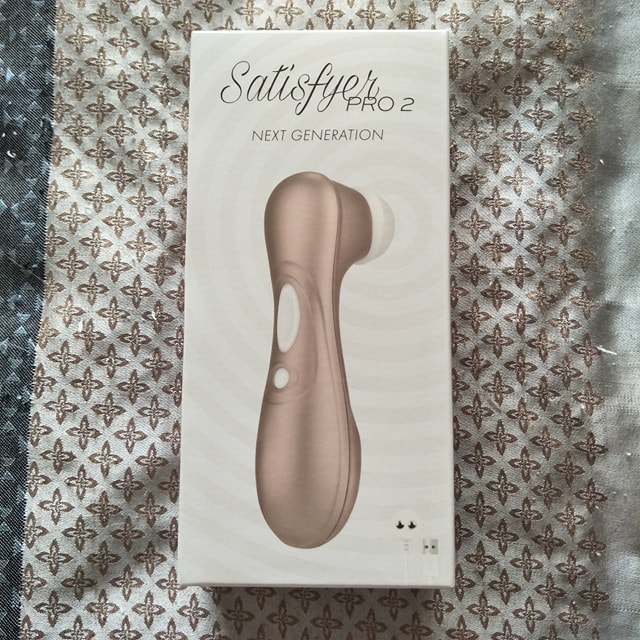 I remember the maiden voyage of the Satisfyer Pro 2 vividly.  I had braced myself for a rapid-fire orgasm and held my breath as I switched the toy on and positioned it over my clitoris.  And then I waited.  And repositioned it.  And waited again.  I certainly felt sensation, and it was definitely pleasurable, but it was nowhere near orgasmic.  I fretted that I was doing it wrong, that maybe my body was broken.  Why had so many other women had intense, instantaneous orgasms with pressure wave toys, while I was sitting here feeling little more than a flutter? 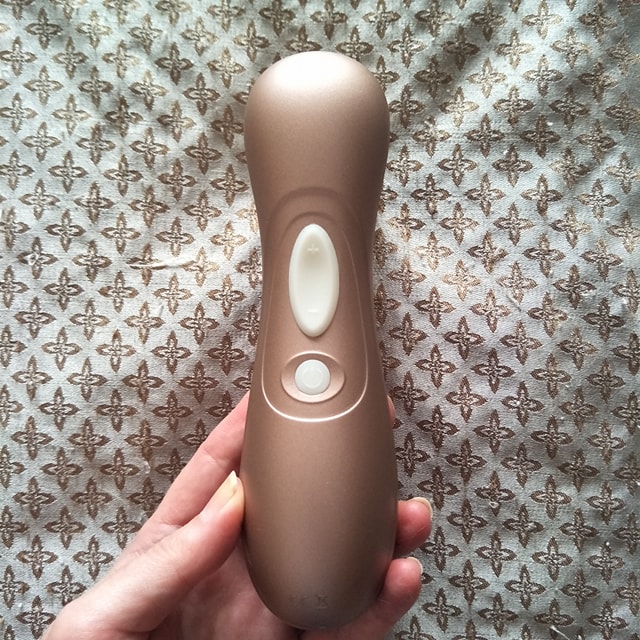 I think the most obvious answer to this question is that the Satisfyer Pro 2 is one of  the gentlest of the pressure wave toys on the market.  Unlike the Sona or the Womanizer which are really intense, the Satisfyer starts off at a very low level of suction.  It is certainly powerful on the higher settings, but the first setting is super gentle.  A lot of the reviews that I’d read where people were experiencing record-breaking orgasms, they were using some of the more intense toys.  The Satisfyer, on the other hand, offers a  more slow-burn build to orgasm.  In many ways, this is superior to toys like the Sona, which take a hell-for-leather approach to stimulation.  The Satisfyer has 11 speeds, ranging from a gentle puff of air all the way through to jackhammer intensity.  This range is ideal for people who don’t like intense clitoral stimulation, or who like to be able to gradually increase the strength of the suction.  There isn’t a lot of variation between each setting, so you can gently step your way up until you find the level that feels best for you.  The Satisfyer is also a great toy to experiment with direct clitoral stimulation, because you can just ease yourself into it and get used to the sensation before increasing the speed. 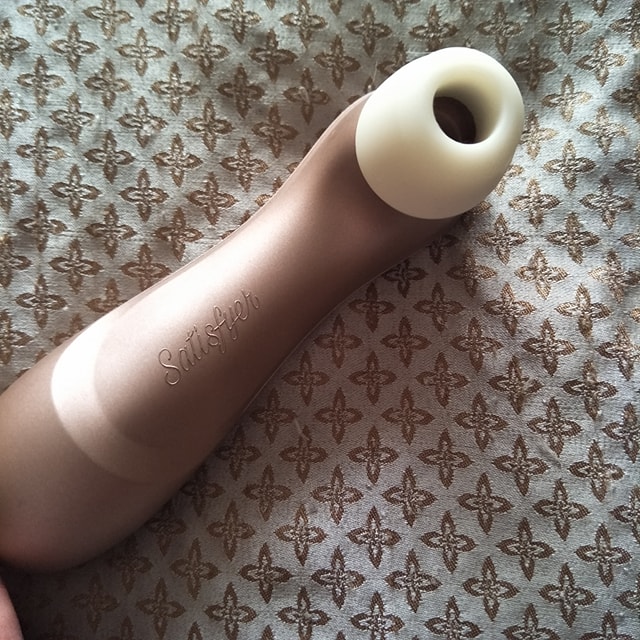 The other factor that makes the Satisfyer a bit more gentle than some of it’s competitors is the size of the nozzle.  The distance between the opening and the actual mechanism is much greater than some of the other pressure wave toys I’ve tried.  This creates a larger space for the pressure to travel over, and I think that’s part of the reason why the sensations feel a little more muted.  Again, this definitely isn’t a bad thing.  Unlike the Sona, where I felt frightened that the oscillating plate might actually make contact with my clitoris, the Satisfyer gives your clit plenty of space and sort of surrounds it with suction waves.  The nozzle itself is quite wide and features a silicone head with thick, rounded edges.  This cushions the delicate skin around the clitoris and feels soft and comfortable.  For folks with larger clits, the Satisfyer would be a great fit because it covers more surface area and it much easier to position. 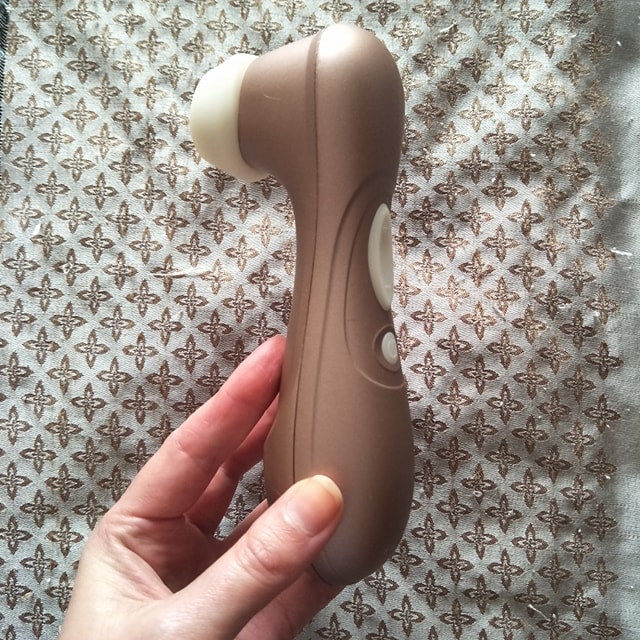 The most important thing that I’ve learned about using the Satisfyer is that it has to be positioned very precisely in order to get the best results.  The nozzle has to be directly over the clitoris in order to work properly. Once you’ve found the right spot, it’s kind of a set-and-forget situation. If you keep it in position, it will work its’ magic and bring you to a spectacular climax.  But if you move it around or bump it, then you won’t get the targeted sensation and it’s really hard to come.  For this reason, I find the Satisfyer is good only as a solo toy used on it’s own.  If I try to use it with a dildo I find that the thrusting knocks it off-centre and it’s frustrating to constantly have to reposition it.  It’s not great to use during partnered sex, because you can’t move around much once it’s on your clit.  And I find it quite a boring toy to hand to a partner to use on me, because there’s not much for them to do.  It’s a case of “hold it in exactly this spot and don’t you dare move!”.  It’s not a terribly versatile toy, but for solo sessions it’s ideal.

Another great feature of the Satisfyer Pro 2 is that it’s completely waterproof, so you can use it in the shower or bath tub.  I’ve taken mine in the tub with me a few times, and it’s the perfect accompaniment to a luxurious bath.  The sensations feel stronger underwater and the toy is silent when it’s submerged.

Speaking of noise, the Satisfyer Pro 2 is also significantly quieter than the other pressure wave toys I’ve played with. It’s by no means silent, but it is quiet enough to muffle under a blanket. 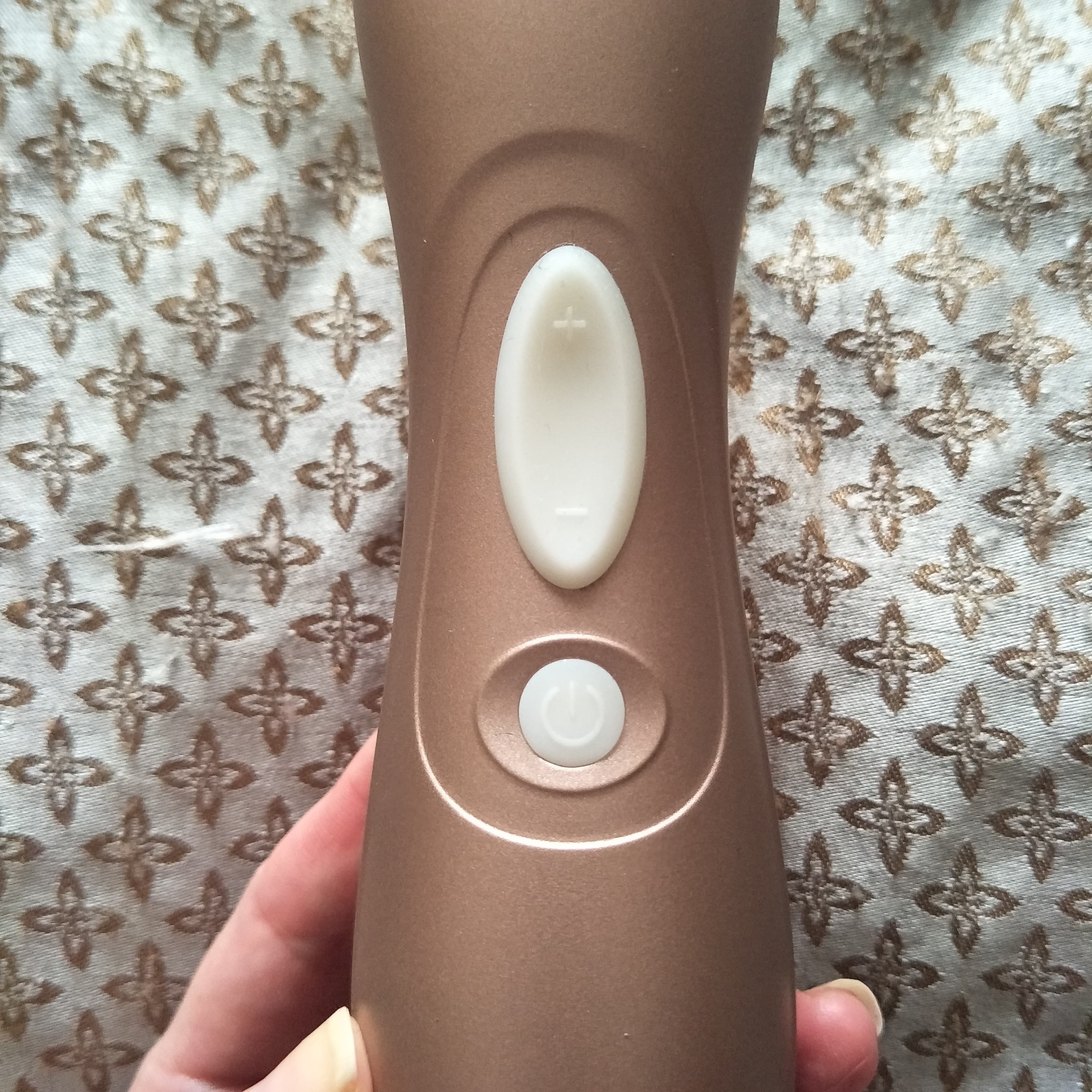 I’m a big fan of the physical design of the Pro 2.  Rose gold is such a sophisticated colour, and it’s a subtle choice in a sea of pink and purple sex toys.  The body is relatively lightweight and the large handle is comfortable to hold.  This is important because it might take a little while to reach orgasm with this toy and you don’t want your wrist to get tired of holding it.  The buttons are quite firm but are fairly easy to press and I like that the power switch is separate to the speed controls. The different shapes enable you to feel which button you’re pressing so you’re not likely to accidentally switch the toy off when you were trying to turn it up.

One of the best aspects of the Satisfyer Pro 2 is the price tag.  I’ve never seen it priced at over $100 and it’s generally sold for around $70.  This makes it one of the most affordable pressure wave toys available (as most hover around the $200 mark).  It’s a great option for people on a budget, and it’s the perfect try-and-see toy for folks who are keen to try pressure wave technology but don’t want to spend a fortune on something they’re not certain they’ll like.

It’s taken me a long time and a bit of experimentation to really get to know the Satisfyer Pro 2, but I’m glad that I waited to write this review.  It’s not the most powerful toy on the market, and it’s unlikely to make you orgasm in under a minute, but it’s a fabulous toy for pleasurable solo play and it’s really affordable.  I’d recommend it if you enjoy direct clitoral stimulation that’s still quite gentle, if you prefer longer masturbation sessions over quickies, if you enjoy pleasuring yourself in the bath or if you’re looking for an inexpensive solo toy.