I believe in the power of learning from one’s mistakes.   Lelo have made some really questionable decisions over the years, but one thing I do love about them is their willingness to look at their original designs, take on criticisms and then work to make the product better. 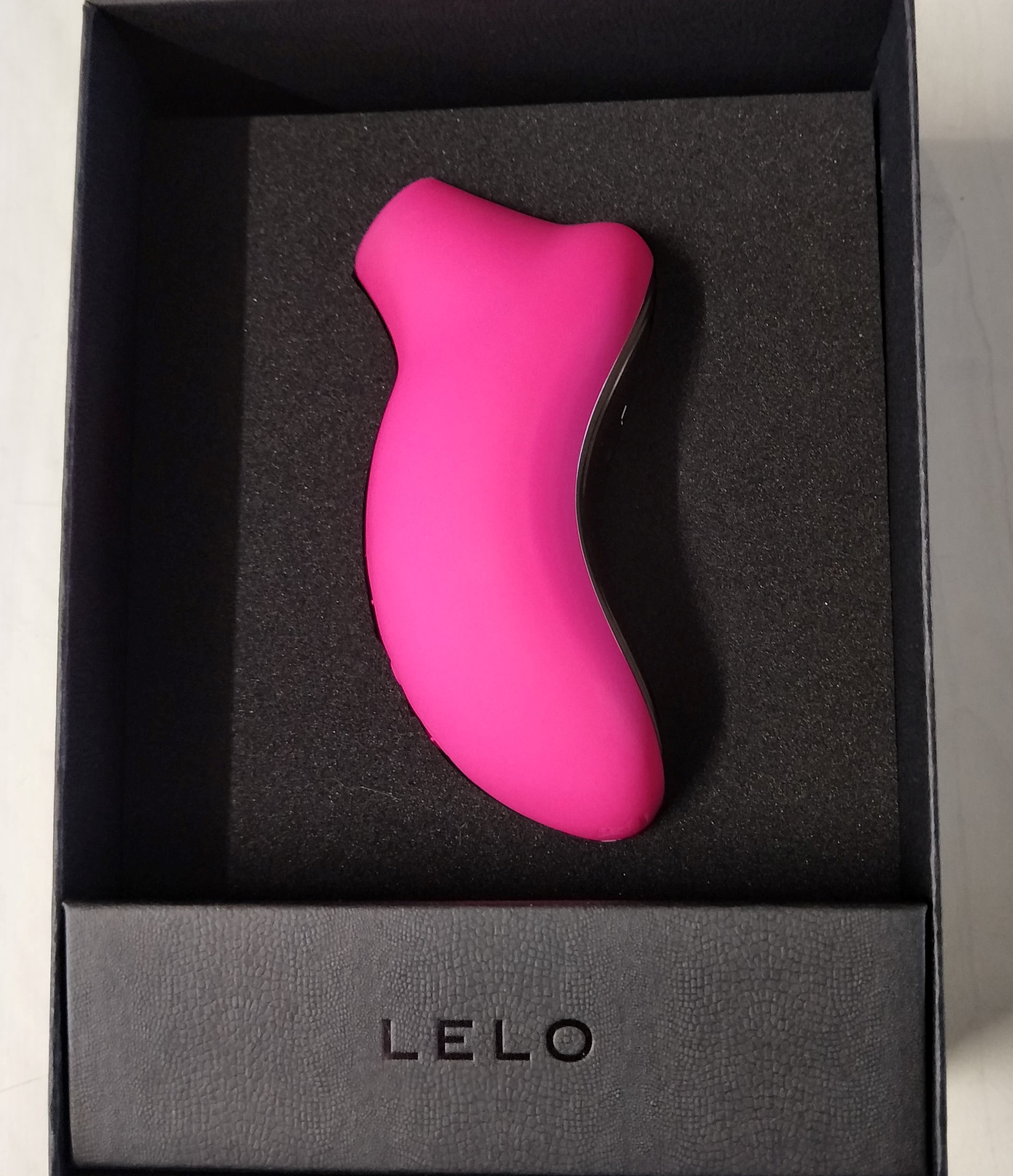 Earlier this year I reviewed the Sona Cruise.  In a nutshell, I found that product overwhelming and abrasive.  So when the folks at My Little Secret reached out to ask if I would review the Sona 2, I jumped at the chance. I was eager to see what changes Lelo had made to the original Sona design, and whether these changes would morph the Sona Cruise into a toy I could actually enjoy using. 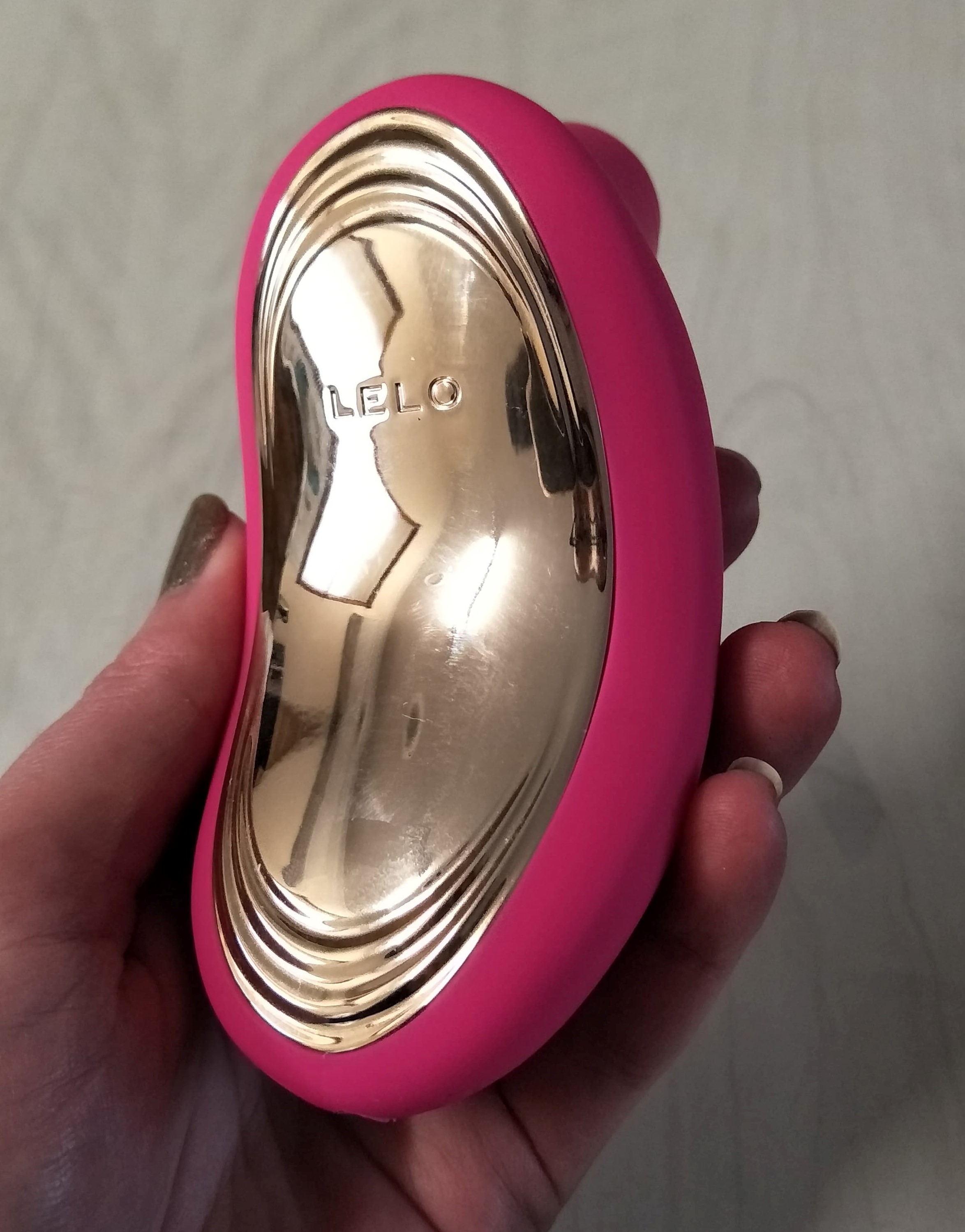 My first reaction upon lifting the Sona 2 from it’s box was “It looks exactly the same as the Sona Cruise”.  From the jelly-bean curved body to the bright cerise silicone, at first glance the two toys seemed identical.  On closer inspection I noticed that the Sona 2 has a series of ridges on the gold backing, while the Sona Cruise is completely smooth. At first I thought that this was going to be the only way to tell the two apart, until I looked more closely at the nozzle. 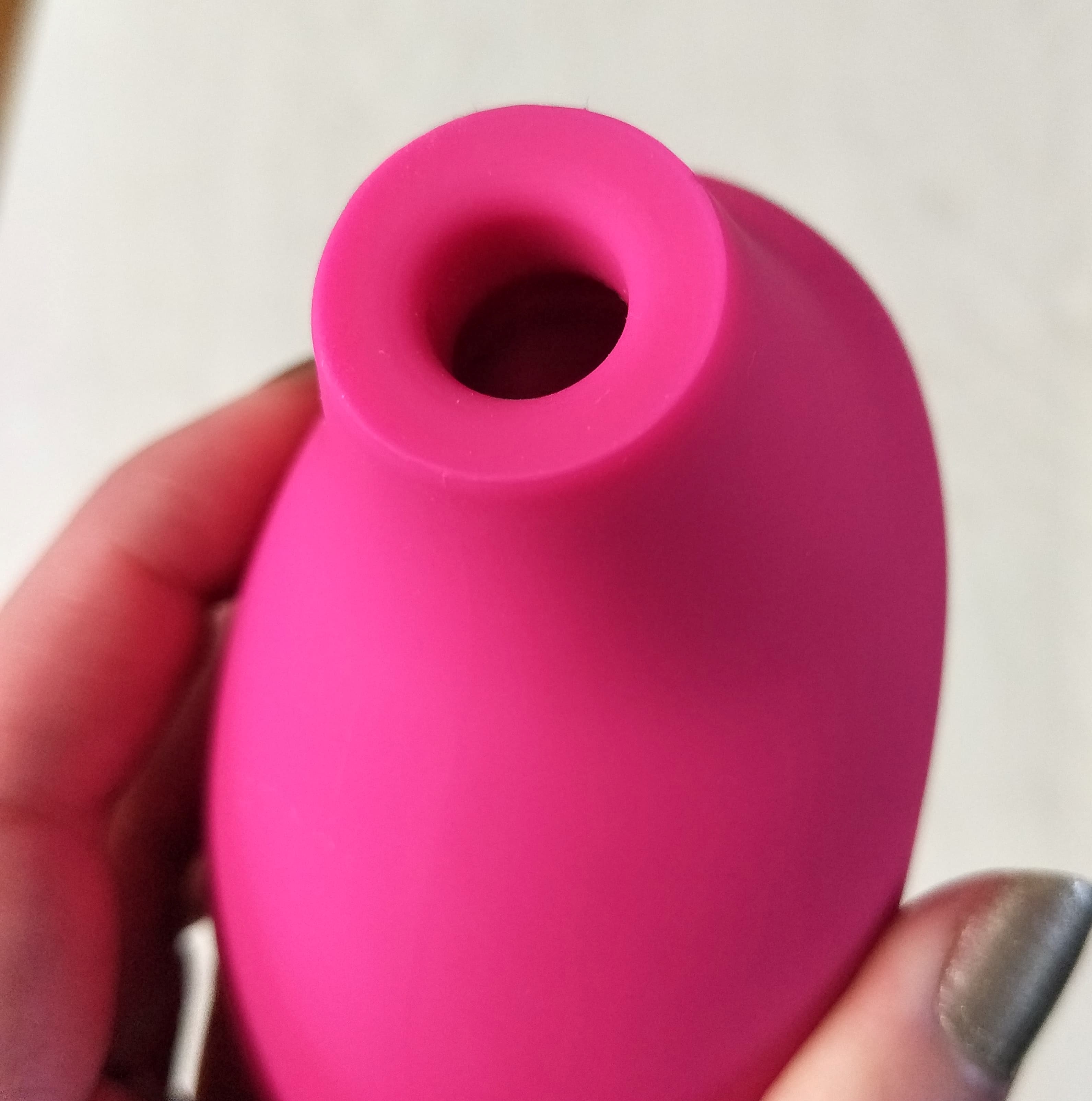 One of the biggest complaints that I’ve heard about the Sona Cruise is that a lot of people found it to be too narrow.  Air-pulsation toys require the nozzle to be positioned carefully over the clitoris, and if you have a larger or more prominent clit, the Sona’s nozzle wasn’t a comfortable fit.  It also had quite a shallow nozzle, and I read a lot of reviews by people who felt like the pulsating plate was buzzing dangerously close to their clits.  The Sona 2 has made some clever tweaks to the nozzle to make it more comfortable to use.  The lip around the opening is concave, while on the Sona Cruise it was convex. When it’s pressed against the body, it adds a tiny bit more space between the opening and the clitoris.  I found it much easier to position this nozzle on my clit, and it stayed in position better. It also made a less dramatic slurping noise than the Sona Cruise when lube was introduced, which I appreciated.  The opening itself is about the same size as the Cruise, so it still might be a tight fit for folks with larger clits.  But the addition of that convex lip adds a little more surface area which will make this toy accessible to a wider range of clitorises. 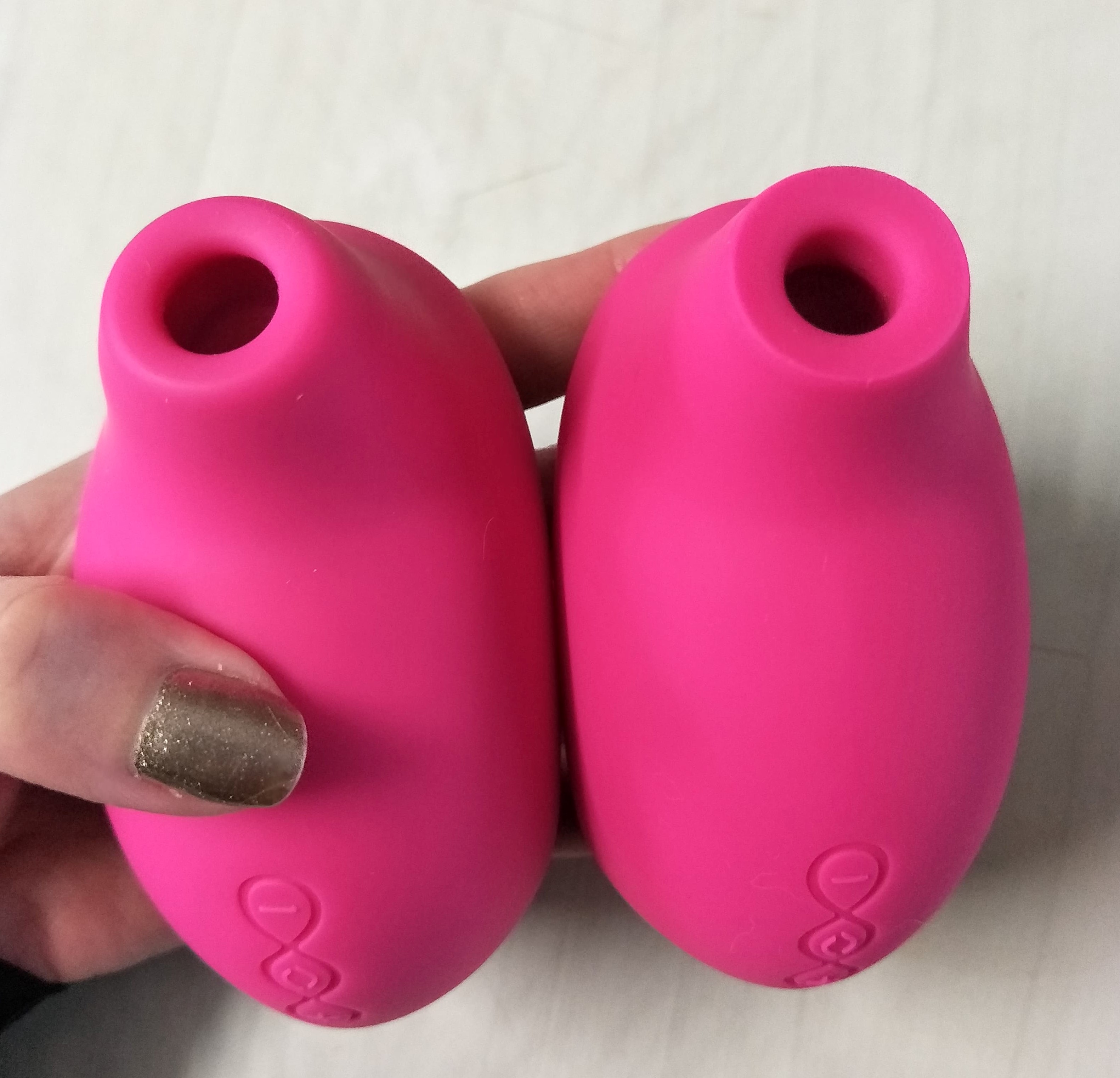 When I switched on the Sona 2, I braced myself for the helicopter-like noise that accompanied the Sona Cruise’s motor.  Unfortunately, the noise level of the Sona 2 is about the same. However, it is slightly quieter than the Sona Cruise when pressed against the body.  It’s still a little on the noisy side, but it’s a slight improvement over the original model.

One of my biggest complaints about the Sona Cruise is that it was too powerful.  Even the lowest setting was much too stimulating for my clitoris and caused pain rather than pleasure.  The Sona 2 is definitely improved this aspect of the toy.  Although it’s still amazingly powerful it has a greater range of settings, starting from a gentle buzz and working up to super intense.  Unlike the Sona Cruise, which I could only enjoy when I used it through my underwear, the Sona 2 could be used directly against my skin with ecstatic results.  The lowest setting still gives me a little jolt when I first press it to my clit but I can quickly relax and enjoy myself, gradually building the intensity as I’m ready for it. 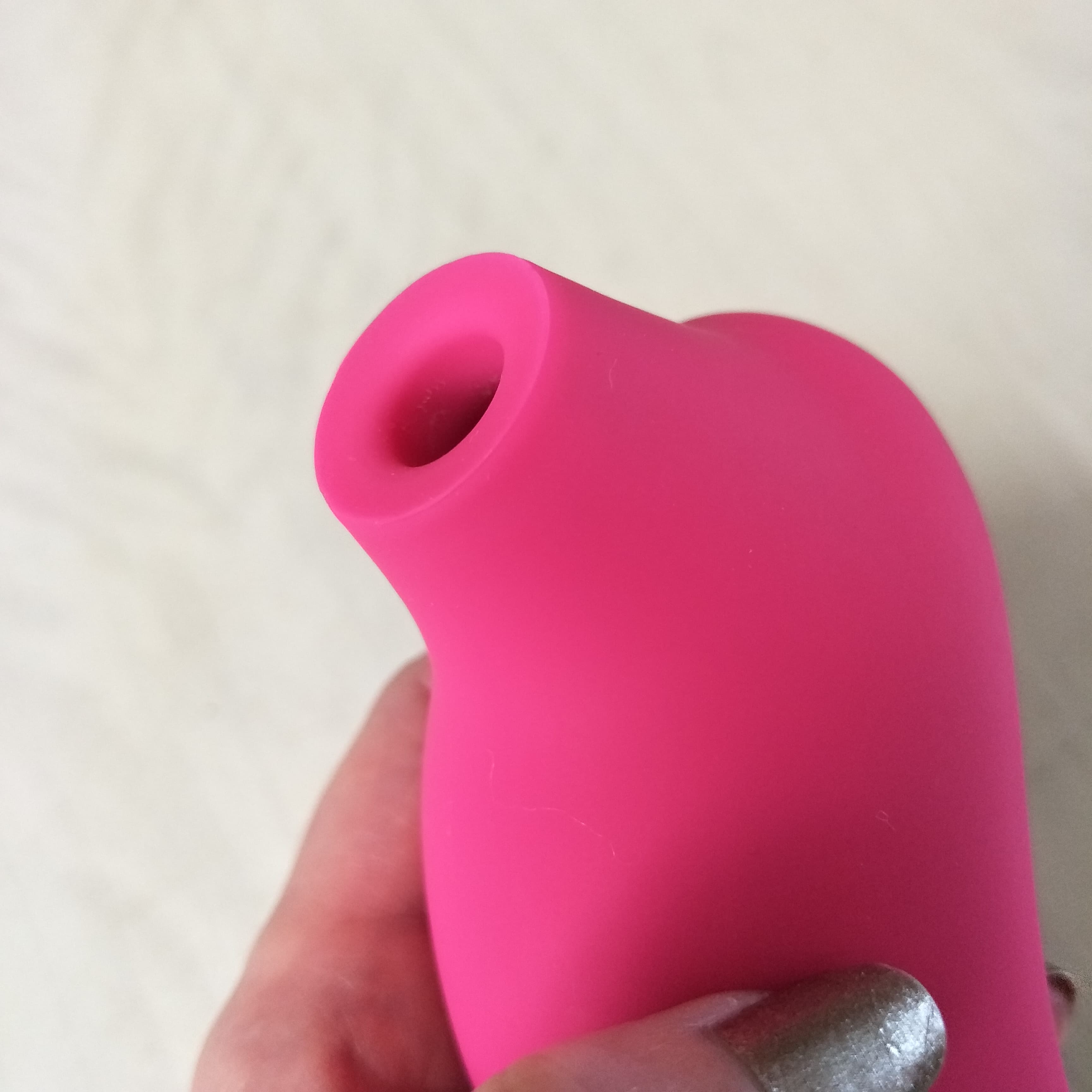 The Sona 2 has a really unique sensation, unlike any toy I’ve used before.  It feels as though the pulses are penetrating deep inside your clitoris, as though it were throbbing from within.  It’s a gloriously rumbling sensation that builds to a massive orgasm.  I’m not kidding when I say that the orgasms I’ve had with this toy have been some of the biggest and most satisfying of my life.  When I play with the Sona 2, I can feel the climax approaching slowly, growing, and when it hits I feel as though I’m teetering on the crest for ages.

The Sona 2 is also one of the best toys I’ve tried for achieving multiple orgasms.  Usually my clit is too sensitive to be touched immediately after I’ve orgasmed.  If I’m using a vibrator or my hand, I need to move away for a bit and give my clit a break before I can come back for round two.  With the Sona 2 I can just keep going, creating a cascading series of climaxes, one after the other.  I’m not sure if the pulsations are less jarring than vibrations, or whether it has to do with the fact that the toy isn’t actually touching my clitoris, but I’ve been able to come over and over every time I’ve used the Sona 2. 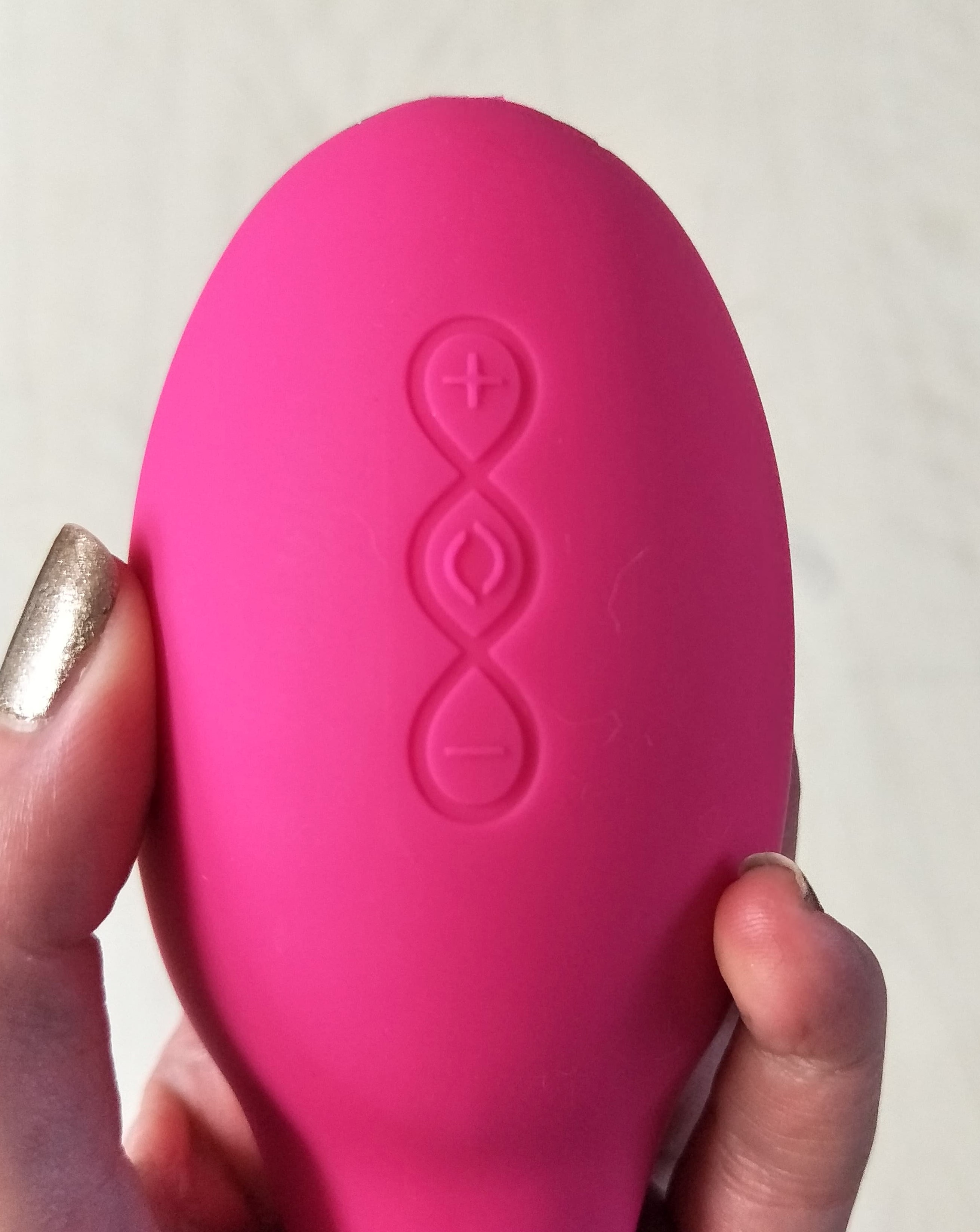 If you’ve been reading my reviews for a while, you’ll know that I’m not a fan of vibration patterns on motorised toys.  I don’t hate them, I just never use them other than a perfunctory test while I’m trying a toy.  With the Sona 2, I actually love the patterns even more than the solid pulsation settings.  The Sona 2 has a wider range of pulsations than the original model.  In addition to some bursts with slow or fast breaks in between, a slow and fast escalation and waves and the “random” setting that Lelo continues to use (which I do absolutely detest), they’ve added what I’d describe as a “flutter” setting and and “jackhammer” setting which is just rapid, strong bursts of pulsation.  I personally love the rollercoaster setting, which is a slow wave, escalating and descending.  For me, that wave of sensation is much more pleasurable than the solid pulsation, which my clit seems to adapt to after a while.  The patterns give you some variation of sensation which feels more similar to oral sex than the solid setting.

I also enjoyed sampling the Sona sensations minus the Cruise Control feature.  Lelo has brought out a Sona 2 Cruise which has the Cruise Control, but I honestly think it’s not worth the money.  I don’t want a random burst of speed that I can’t control, on a toy that already offers a very intense sensation. Without that setting and with the addition of the more gentle speeds, I felt like I was able to control the toy better, to really tailor the experience to what my body wanted.  I wasn’t at the mercy of the toy, the toy was working for me. 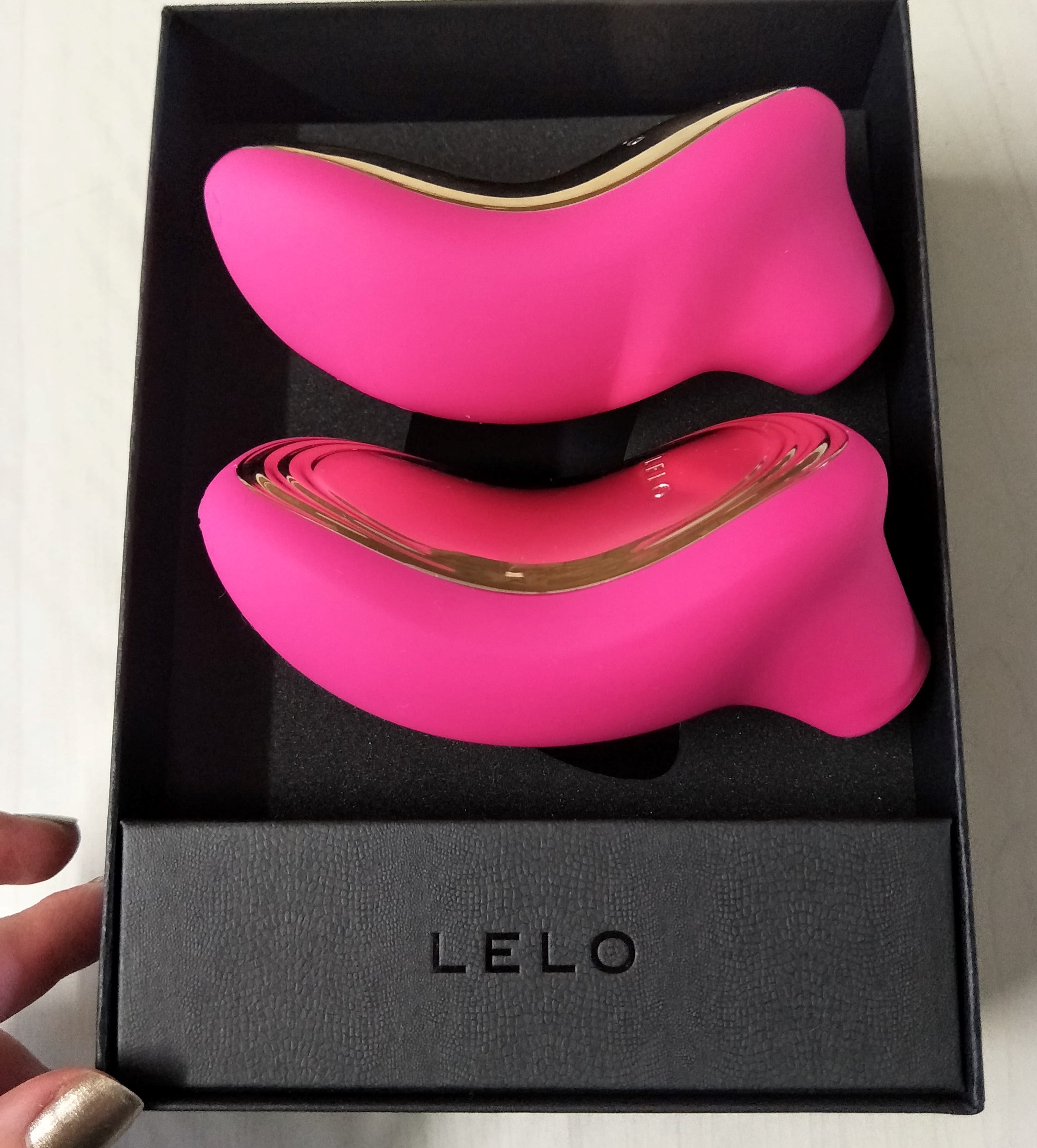 Overall I think the Sona 2 is a vast improvement on the Sona Cruise. The simple tweaks to the nozzle and the addition of some gentler settings and extra patterns has made this toy much more enjoyable.  I never use my Sona Cruise, because it’s just too intense.  The Sona 2 has become one of my go-to toys, and one that I’d recommend to anyone who wants a powerful sensation, wants to try achieving multiple orgasms, or who has tried a lot of toys and wants something unique.

*****EDIT**** In the time that has passed since I wrote this review, there have been numerous reports of people experiencing moderate to severe injuries from using the Lelo Sona. These injuries have included bleeding of the labia and nerve damage in the clitoris of several unfortunate users. If you’ve read this review and are thinking of purchasing a Lelo Sona, I would advise proceeding with caution. I can no longer in good conscience recommend this toy to my readers****