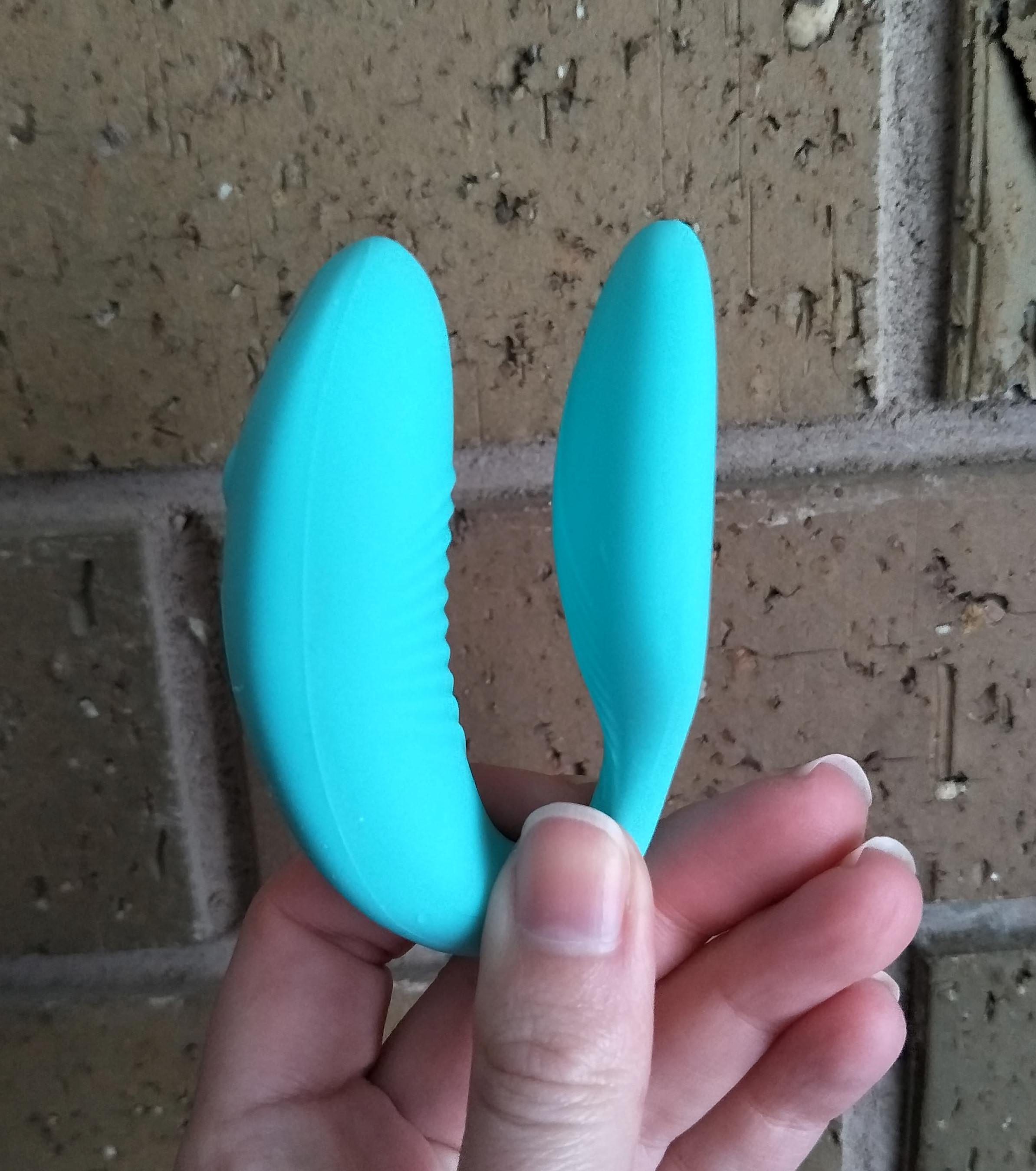 I was very excited to try any toy that could potentially close the orgasm gap during penetrative sex.  Contrary to popular belief, penetration isn’t the best route to orgasm if you have a vagina.  Only around 30% of people with a vagina can climax from penetration alone.  For the vast majority, clitoral stimulation is the vital ingredient that turns sex from fun into earth-shaking.  But the clitoris is often sadly neglected during penetrative sex.   I was excited to see whether the We-Vibe Sync could replace my usual handheld vibrator and give me the option of going hands-free during penetration.  Thankfully, the kind folks at Passionate Jade sent me one to test-drive and review. 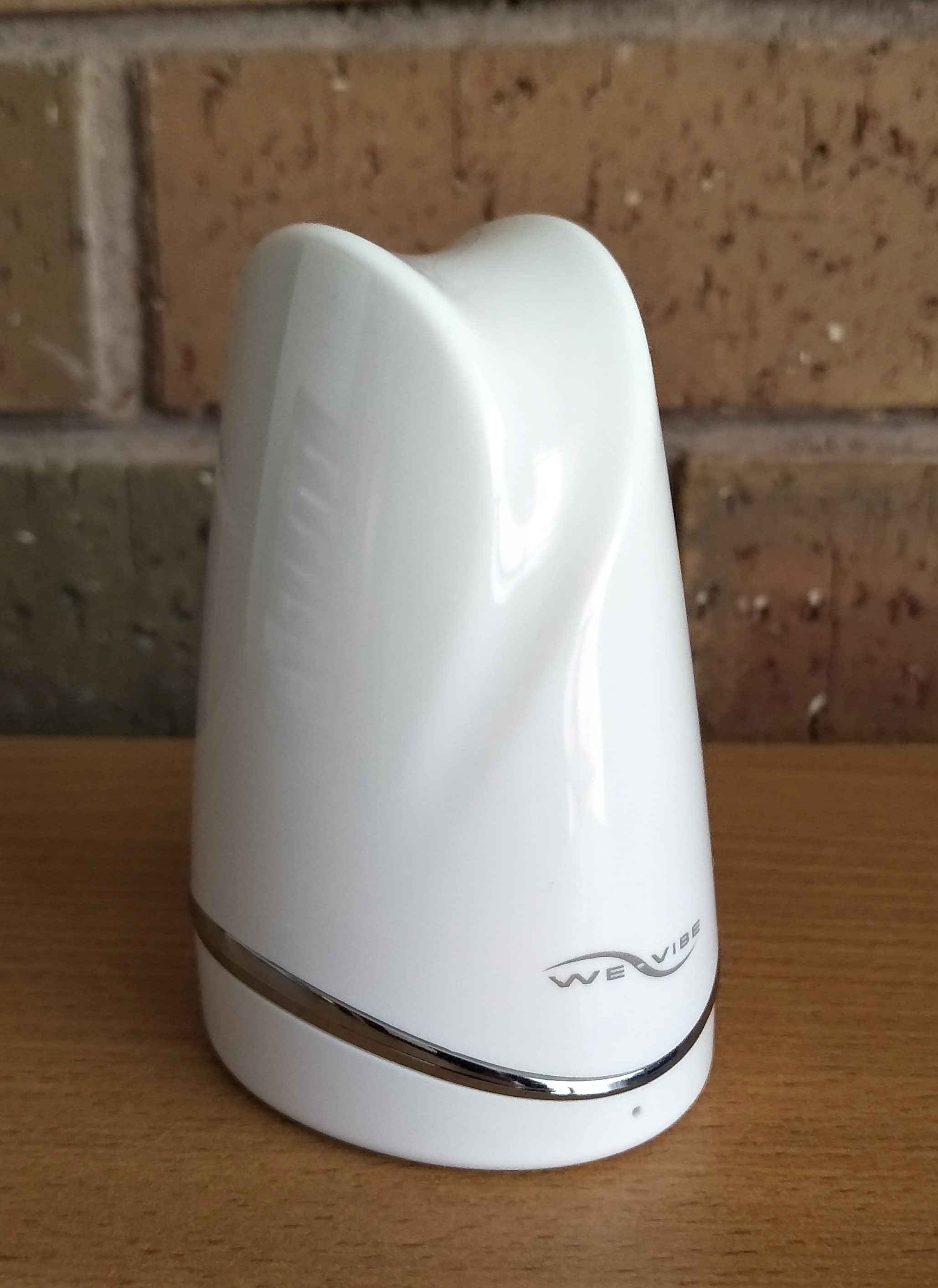 When I unwrapped the Sync, I gave an involuntary sigh of elation. Normally I don’t care much about the way my toys are packaged, but We-Vibe’s efforts warranted that little sigh.  The Sync comes in a white case, or “storage pod” as I dubbed it.  It connects magnetically to the pod and there’s a tiny slot for the remote control.  The charging cable plugs into the pod for easy charging.  It has a little lid that keeps everything clean and looks incredibly discreet.  You could easily mistake this for an air freshener.  It’s perfect for popping on your nightstand and at a glance nobody would suspect that it’s a vibrator. 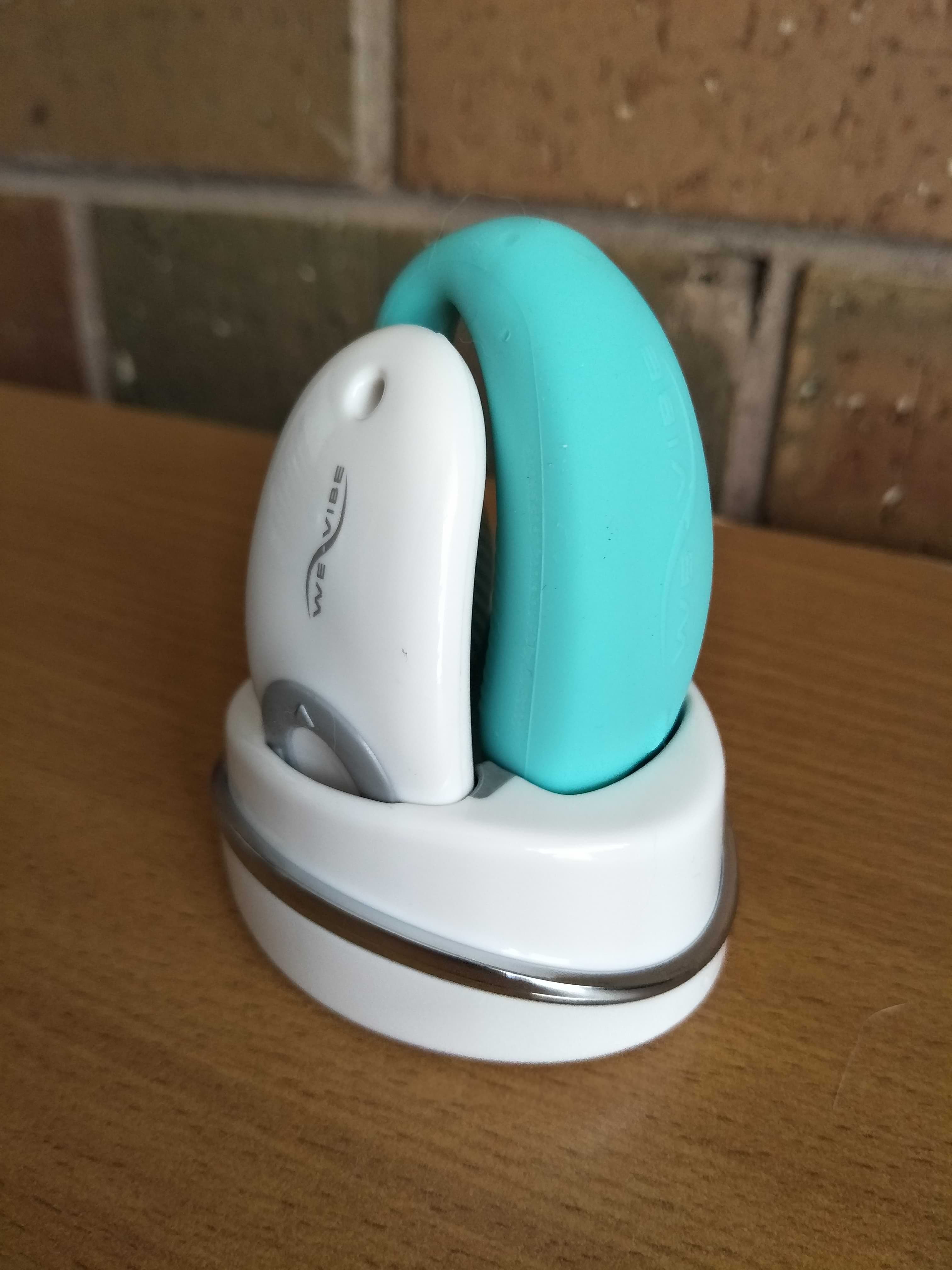 The We-Vibe SyncWe-Vibe Sync has gone through a number of designs.  Each model has had it’s flaws, which We-Vibe has taken on board and improved upon.  I have to give snaps to We-Vibe for actually listening to customer feedback and working with it.  The current incarnation of the Sync has two hinges instead of the single hinge that featured in the previous models.  This double hinge gives the toy a huge range of articulation, so it can be bent and adjusted to suit your body.  This feature is a huge step towards making the toy accessible to a wider range of vaginas, rather than expecting it to be one-size-fits-all. 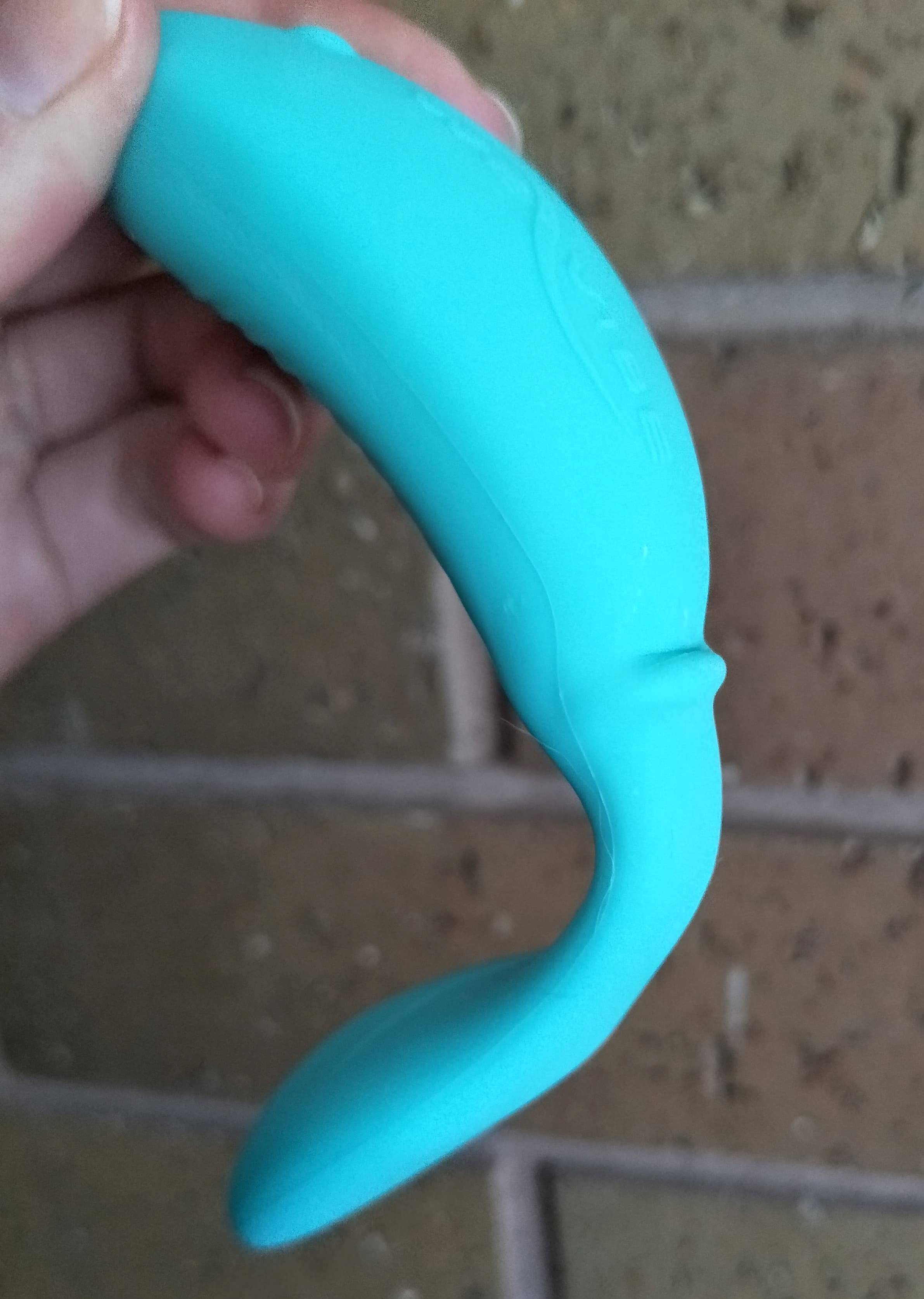 The one thing I did notice about this hinge that I wasn’t fond of is the way that the silicone bunches up when the toy is opened wide.  While this isn’t a problem on it’s own, I do wonder how well the silicone would hold up after repeated adjustments, and whether it might begin to wear or split with time. 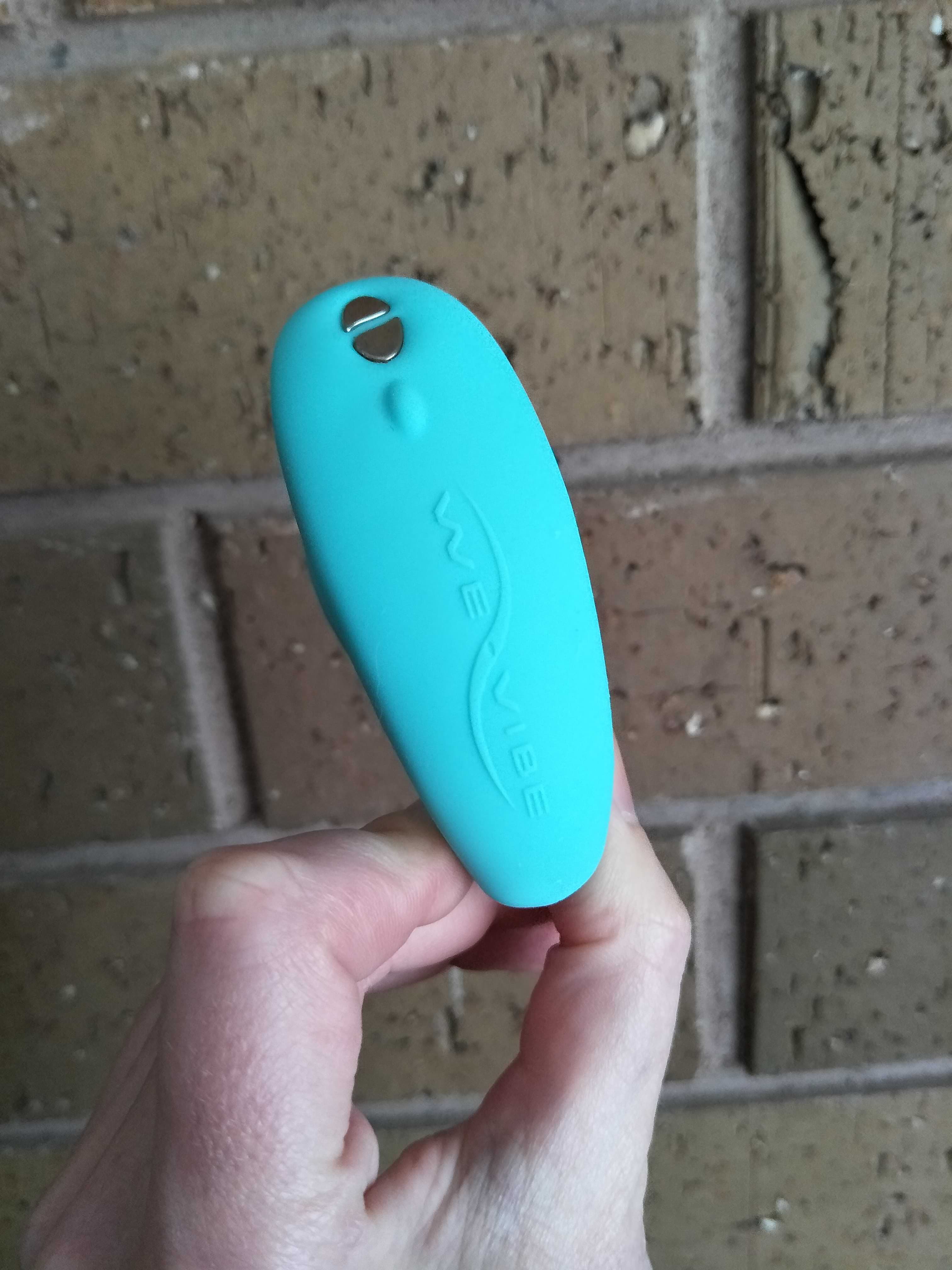 I must admit that it took me quite a few tries to get this toy inserted comfortably.  I played around with the hinges, opening them to what I considered the “medium” setting, figuring that would give me room to insert it and then I could tighten it up once it was in place.  That didn’t really work well, because it’s very hard to manipulate the hinge once the toy is inserted.  Closing the hinge tightly and then inserting the toy didn’t work either, because the resistance of my body moved the hinge out wider than I wanted it.  After a few tries, I finally had it in place.  However, I then encountered the problem that so many people have with dual-stimulation toys: I couldn’t get it to hit my g-spot and my clitoris at the same time.  I opted to have it squarely on my clit, because that’s the spot where I want more attention during penetration. 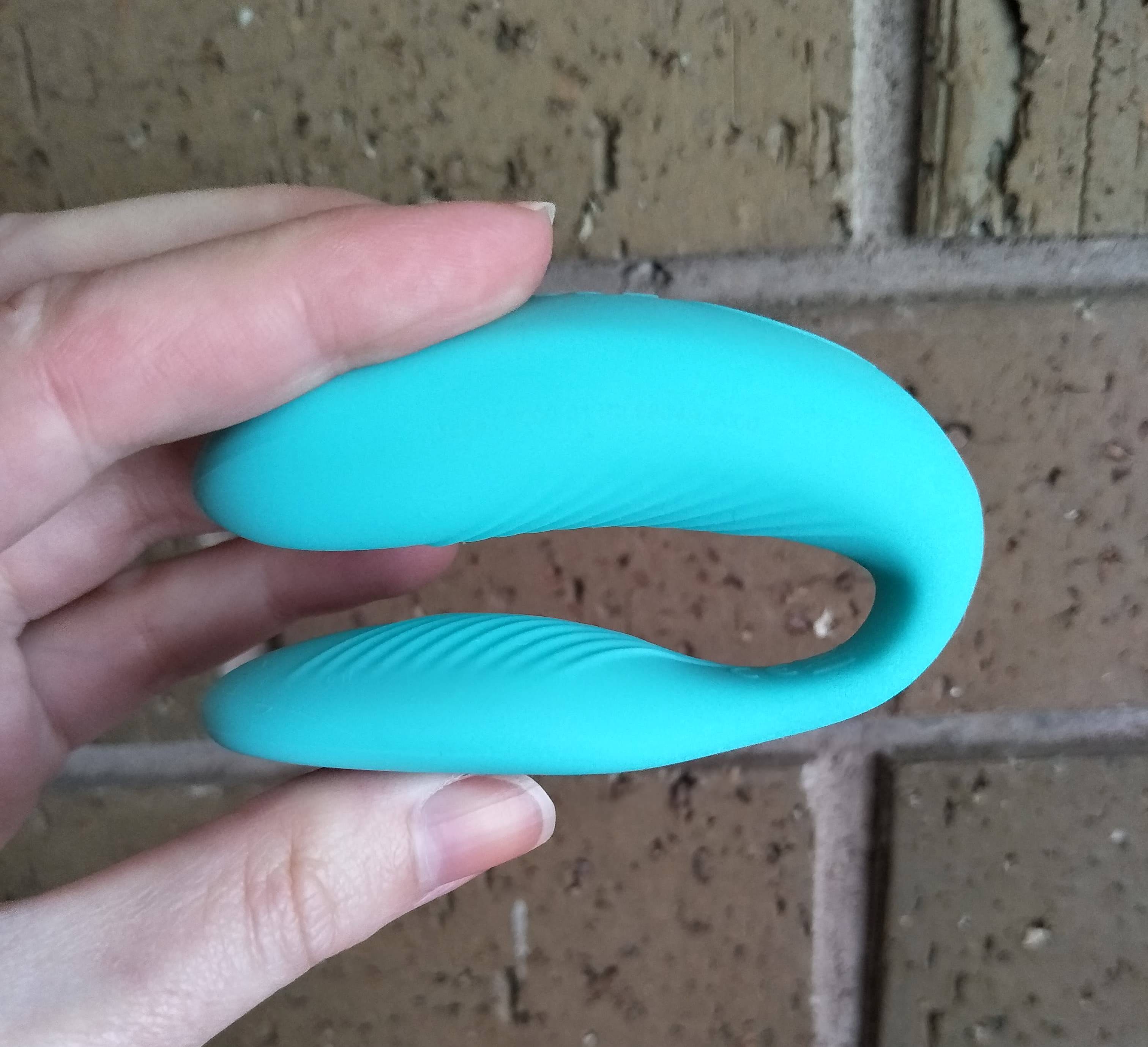 When I switched the toy on, I had that sigh of elation once more.  We-Vibe never disappoint me with the quality of their vibrators.  The vibe is deep, rumbling and satisfying.  You can control both motors separately using the remote and there’s a good range of vibrations to choose from.

I put the Sync through it’s paces, trying it in a range of different contexts. First I used it during penetrative sex with a partner.  It was….awkward.  The Sync did not want to stay in position, and I ended up having to use one hand to hold it steady.  It also made penetration feel, shall we say, crowded?  It did not feel comfortable to have both this toy and my partner inside me, and my partner was not fond of the sensation either.  It didn’t matter which position we tried, the Sync just wasn’t a good fit for us. 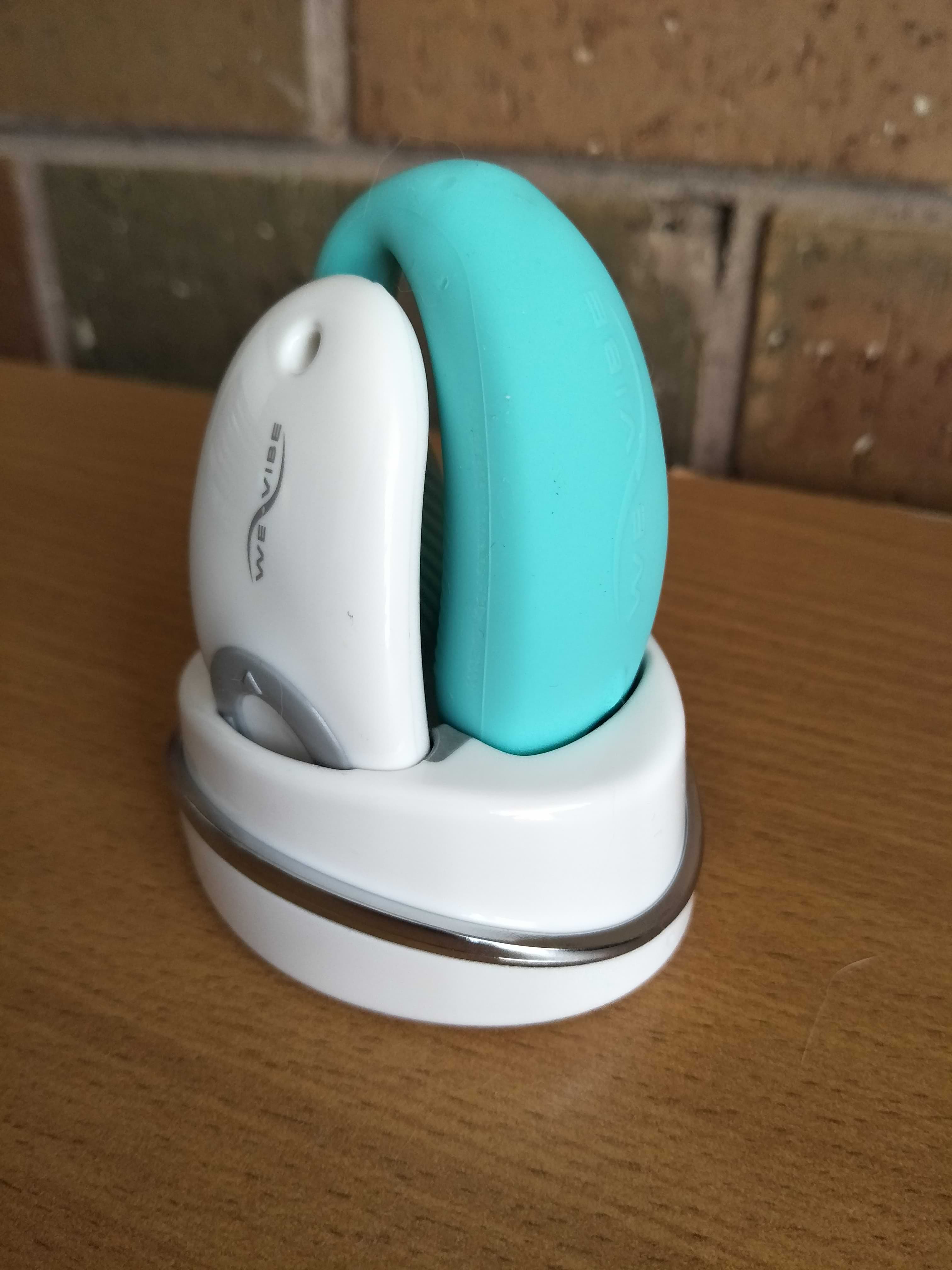 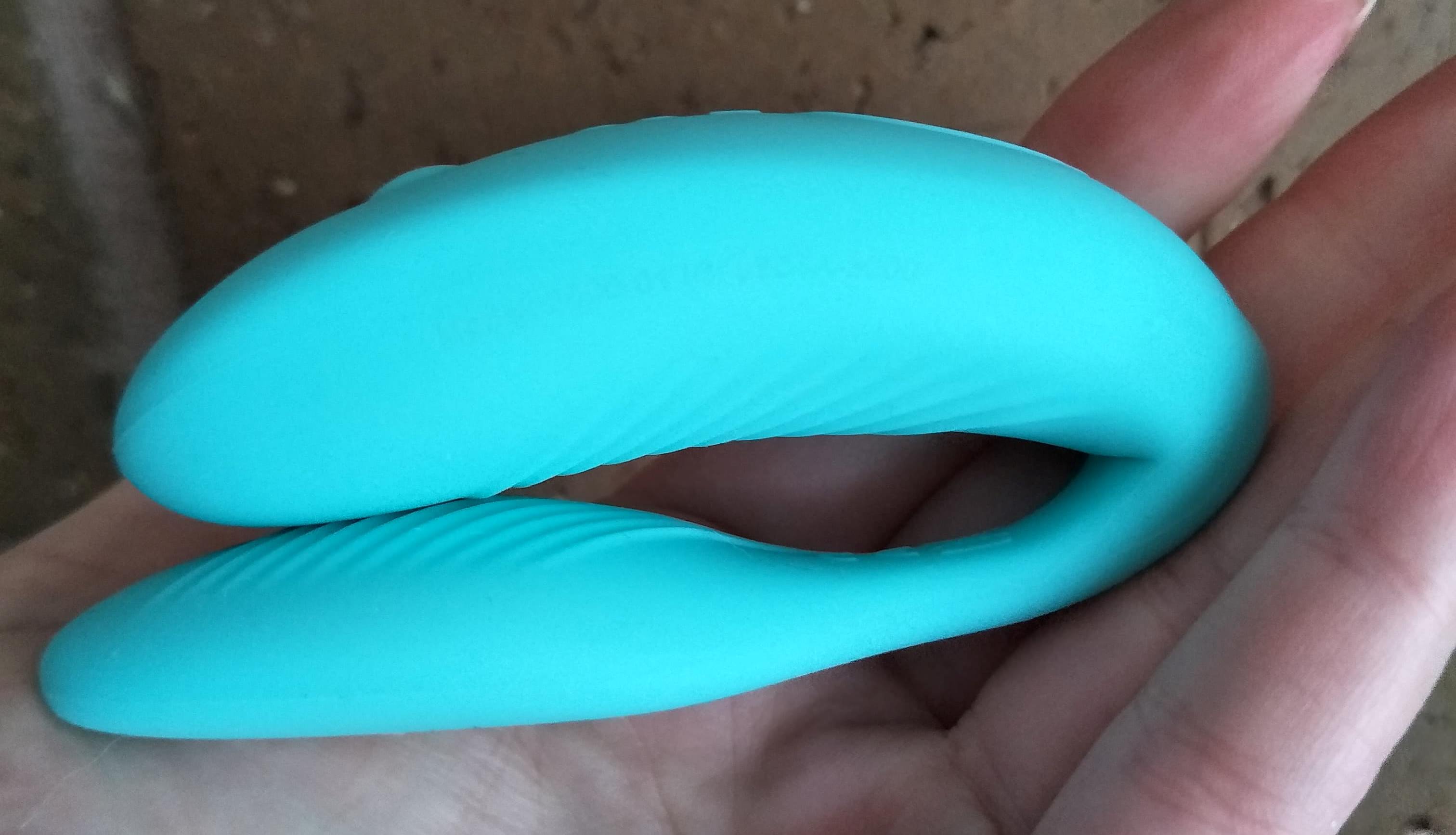 I had wondered if the Sync might be suitable as a wearable vibrator for kinky fun.  I imagined wearing it to dinner and handing the remote to my partner for discreet public play.  I quickly put that idea to bed when I tried the toy.  Firstly, although the motors aren’t super loud, they are much too noisy to be discreet in public.  Secondly, when I tried wearing it around the house it shifted with every step I took.  Finally, when I wore it under clothes, the remote only worked if it was within a few centimetres of my body and pointed directly at my crotch.  So the Sync is best enjoyed at home, sans clothing. 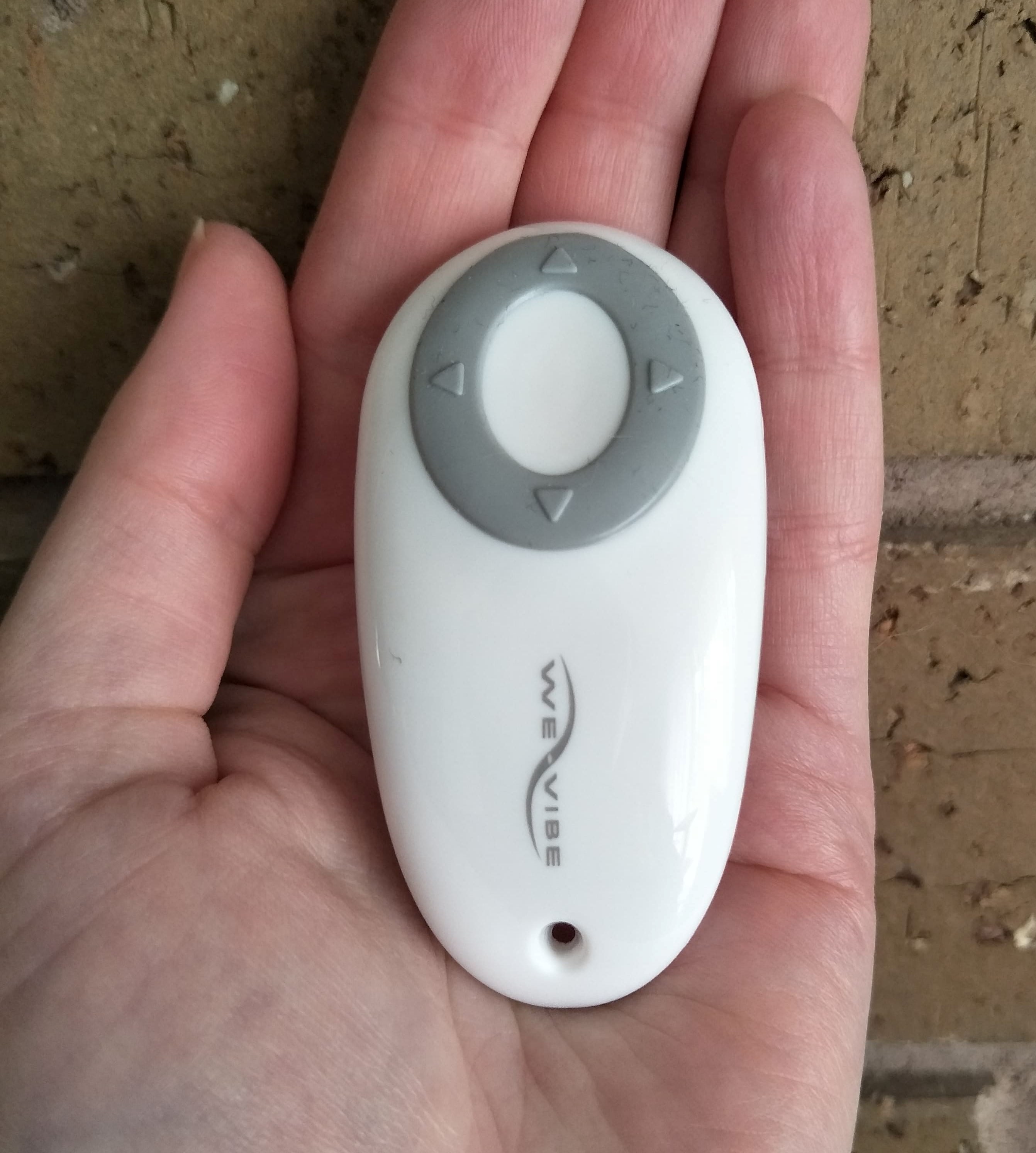 The Sync is also compatible with the We-Connect App.  The App allows you to control the toy using your phone, or to hand over control to your partner from anywhere in the world.  This is a great feature for long-distance lovers.  Unfortunately, as I mentioned in my review of the We-Vibe Rave, the We-Connect App is buggy as hell.  It disconnects easily, often at a crucial moment and it’s not reliable.  To control the toy myself I much prefer using the remote, and while it’s fun for long-distance play the app leaves a lot to be desired.

Overall, I think that the We-Vibe Sync is a toy with a lot of potential.  I really enjoyed using it for solo fun, or to wear while playing with a partner.  While it didn’t work for me for penetration, I know a number of other bloggers who love using the Sync during P-in-V sex.  This could be perfect for you if your partner is on the small side and you crave a bit more sensation during penetration.  I love the adjustability of the toy and the quality of vibration is to die for.  Although the app needs some work, the remote control works perfectly and gives you access to hands-free orgasms.  The storage case clinched my admiration for We-Vibe and is a really neat feature of this toy.  The Sync is a beautiful, good quality vibrator that allows you to get creative in the bedroom.