What I wore: a birthday in Wonderland

For as long as I can remember, I’ve adored Alice in Wonderland and Through The Looking Glass.  As a child the story opened up a world of impossible creatures and grand adventures.  The older I get, the more I appreciate the surreal elements of the story and the riddles hidden within. Alice in Wonderland has also had an influence on my personal style and I’ve done a number of Alice themed outfits over the years.

When ACMI in Melbourne revealed that they were holding an entire exhibition devoted to Wonderland, I was keen to check it out.  And what better day to head along to this event than my birthday?  My lovely boyfriend David and his mum and stepdad came along with me to celebrate my 32nd birthday.

When I was choosing what to wear, naturally I knew that it had to be Wonderland themed.  I had two dresses in mind, one that reminded me of Alice and another that was more Queen of Hearts in style.  Ultimately I decided that on my birthday, I really wanted to dress in a manner inspired by the accidental heroine of Lewis Carroll’s tale, Alice. 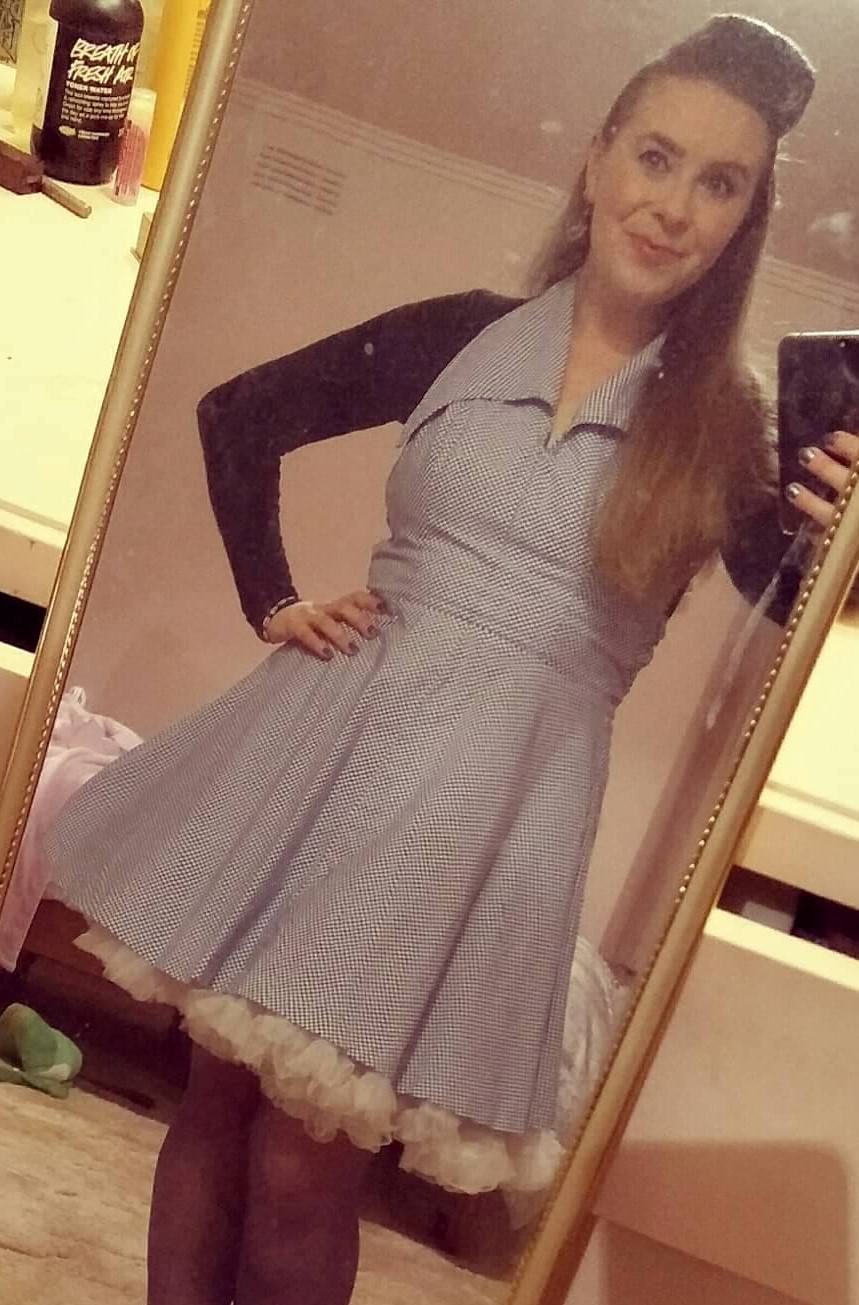 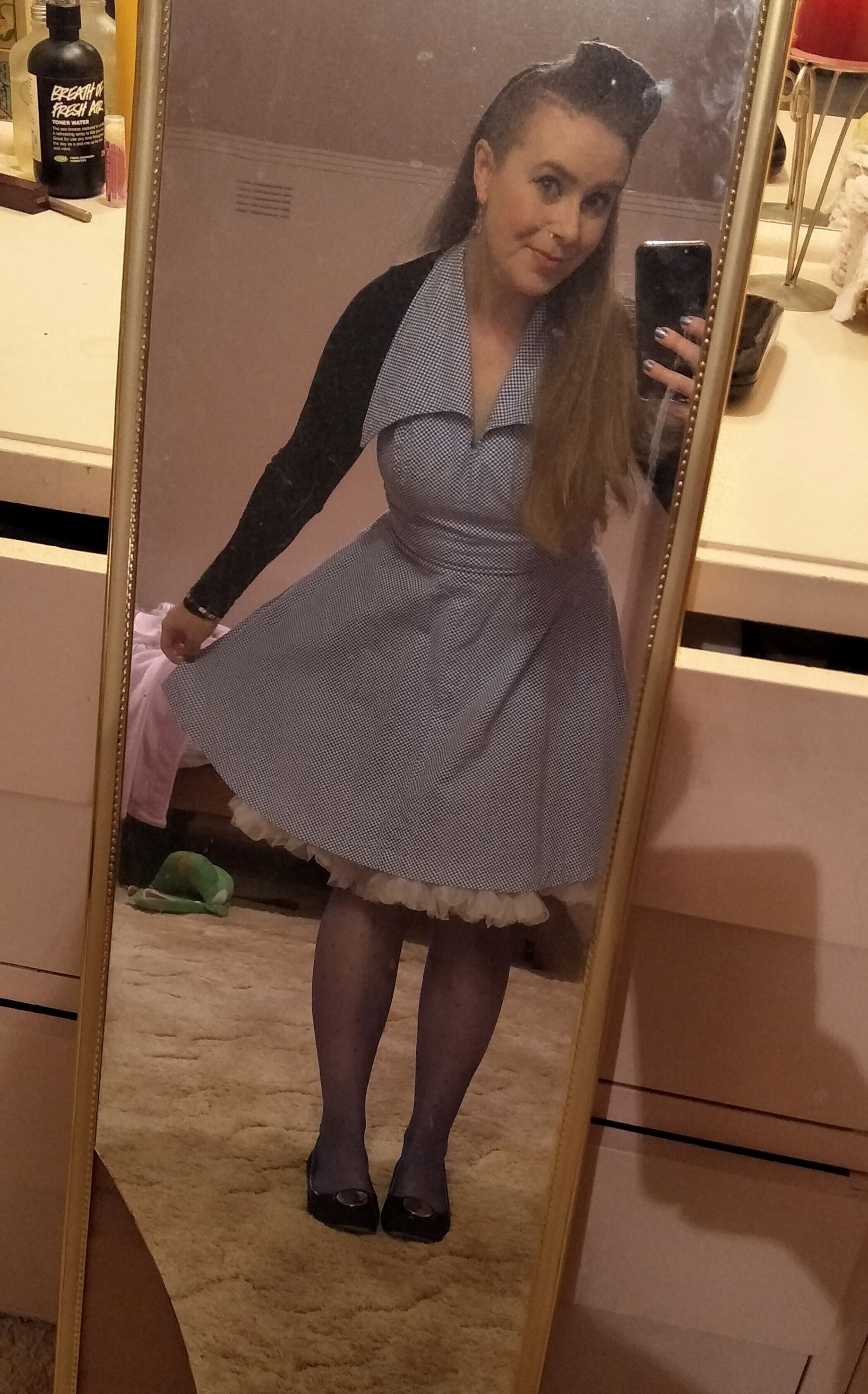 I blended numerous Wonderland elements into this outfit.  I wanted to look like a pinup, rockabilly version of Alice.  I wore my hair up in a pomp and added my kitty ears as a nod to the Cheshire Cat.  I kept my shoes low and comfortable but added a pop of colour with bright blue polka dot tights.  My crinoline petticoat gave my skirt a full look, mirroring the way that Alice’s skirt poofs out when she’s drifting through space down the rabbit hole. 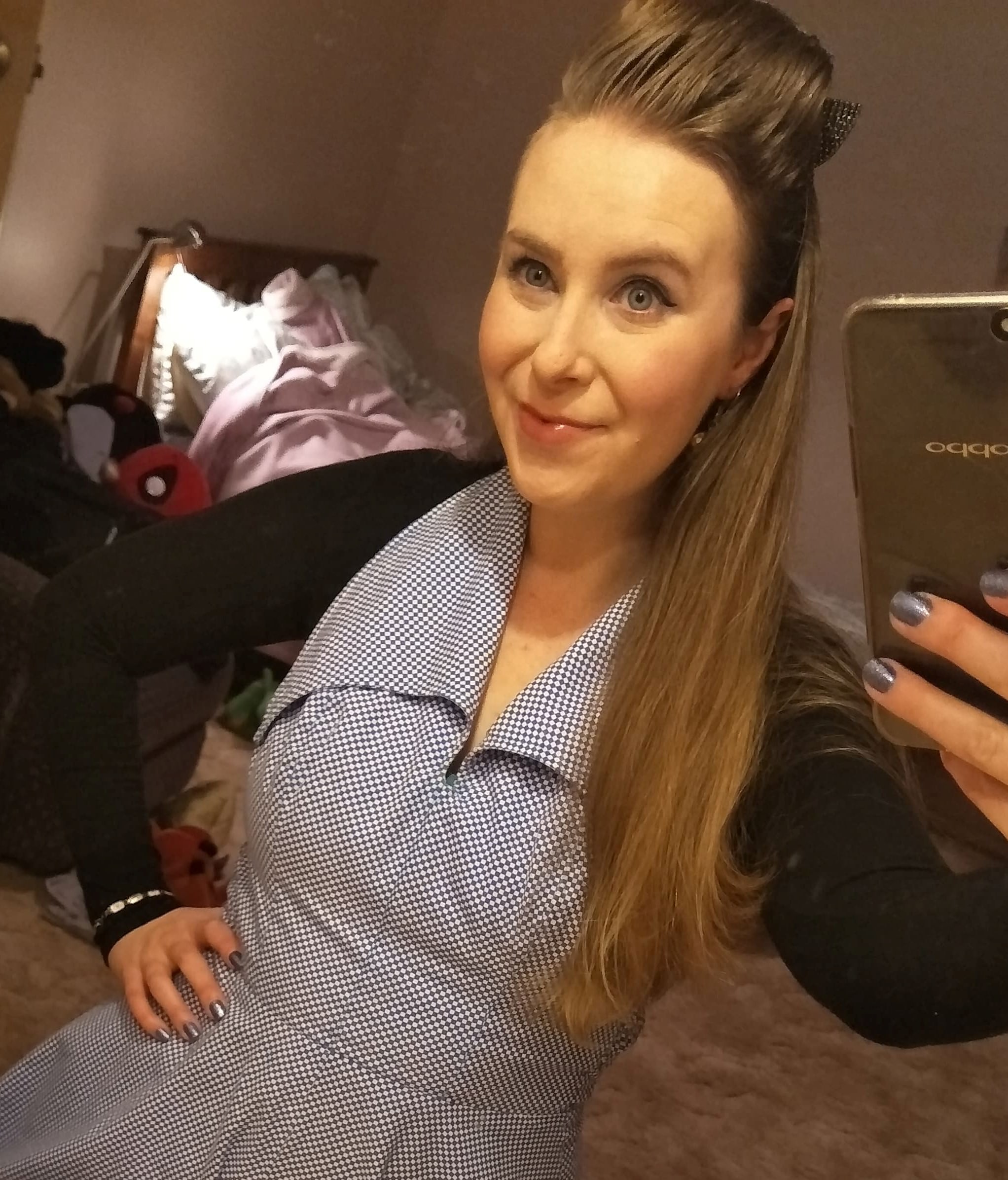 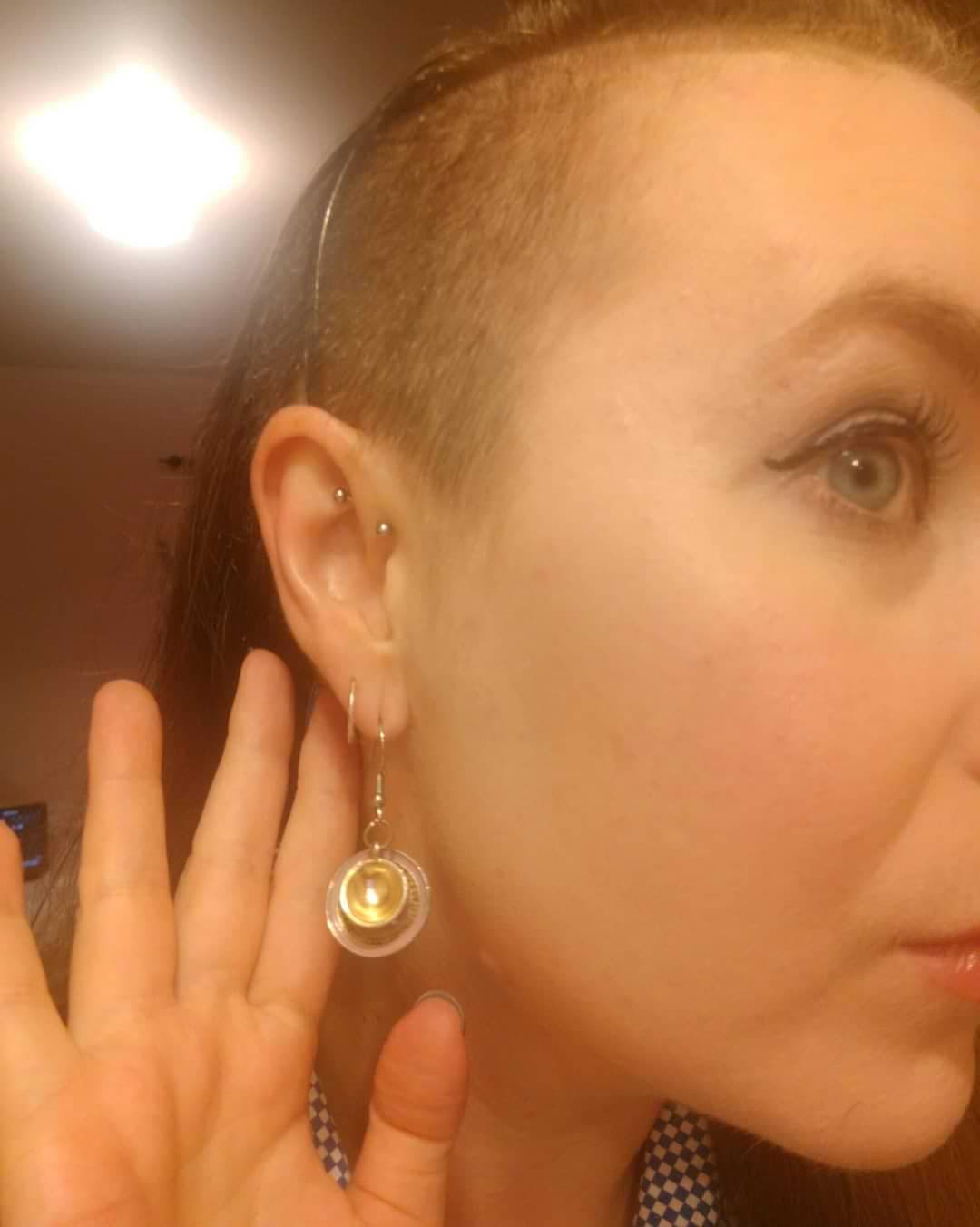 Fun cup and saucer earrings from Disney Couture to call back to the Mad Hatter’s tea party. 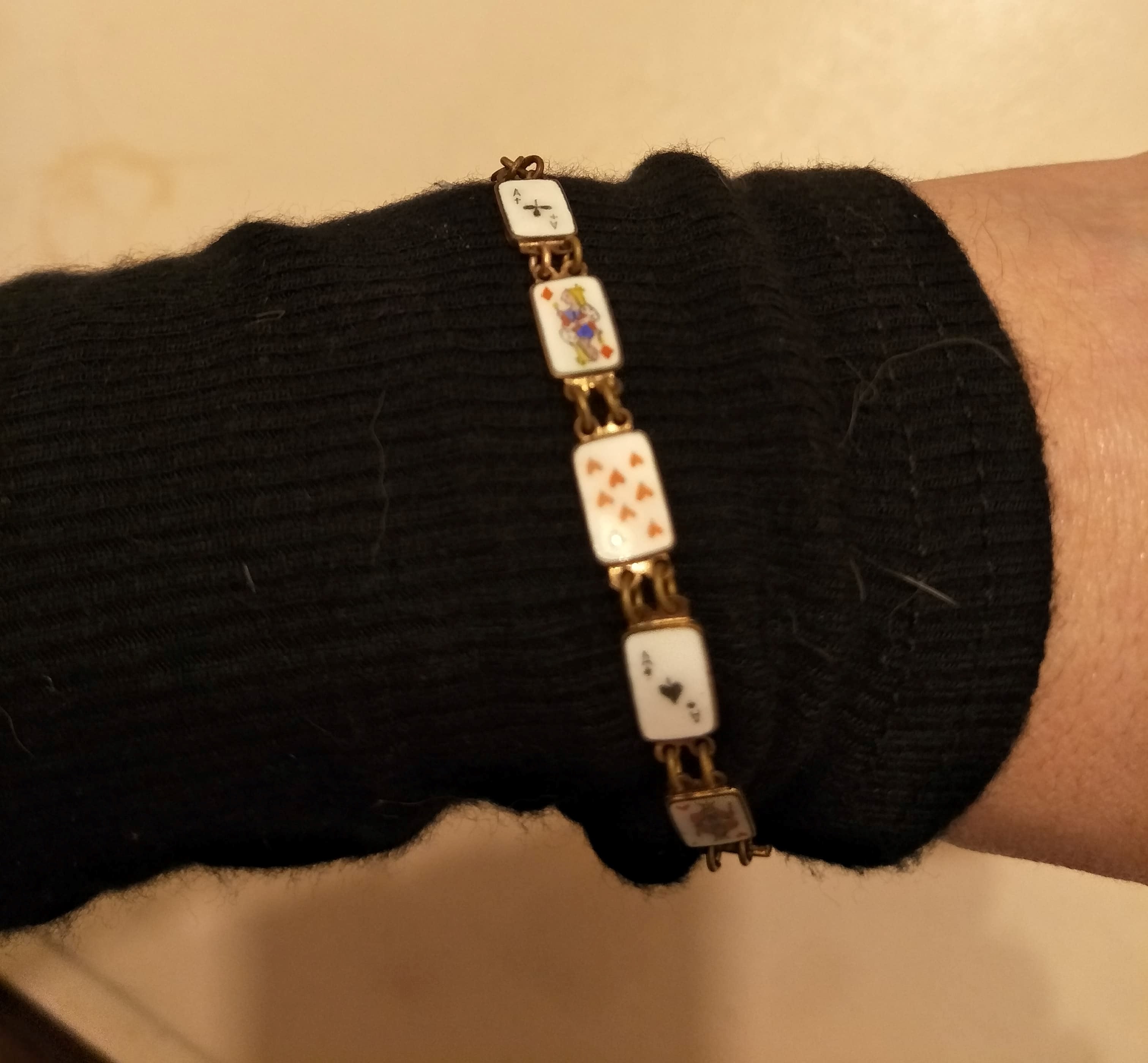 This playing card brooch was a gift from one of my friends last Christmas and I just adore it.  It’s so unique and it was the perfect adornment for a trip to Wonderland.  So much of the style of Alice in Wonderland is inspired by playing card motifs, from the Queen of Heart’s court to the guards that protect her castle. 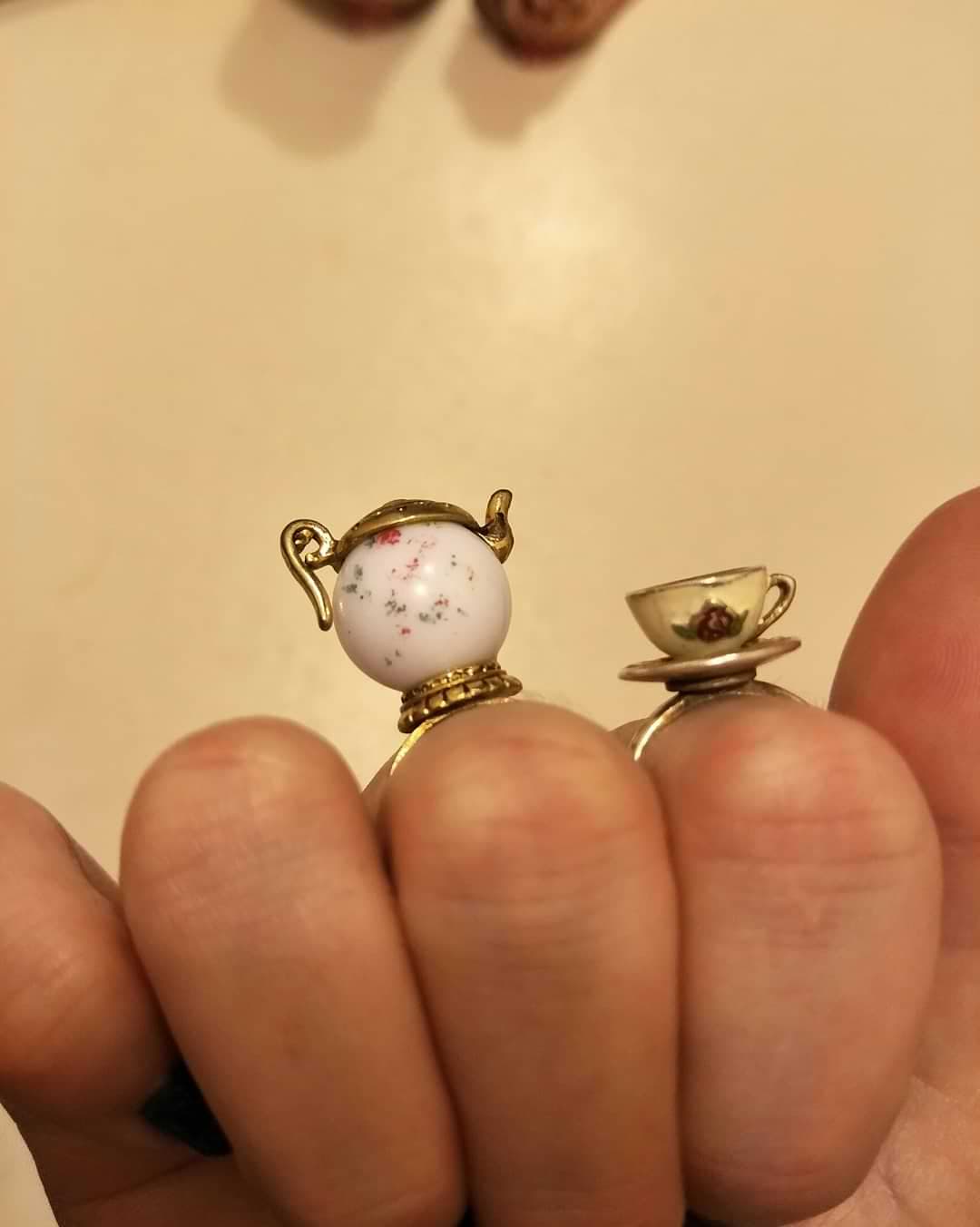 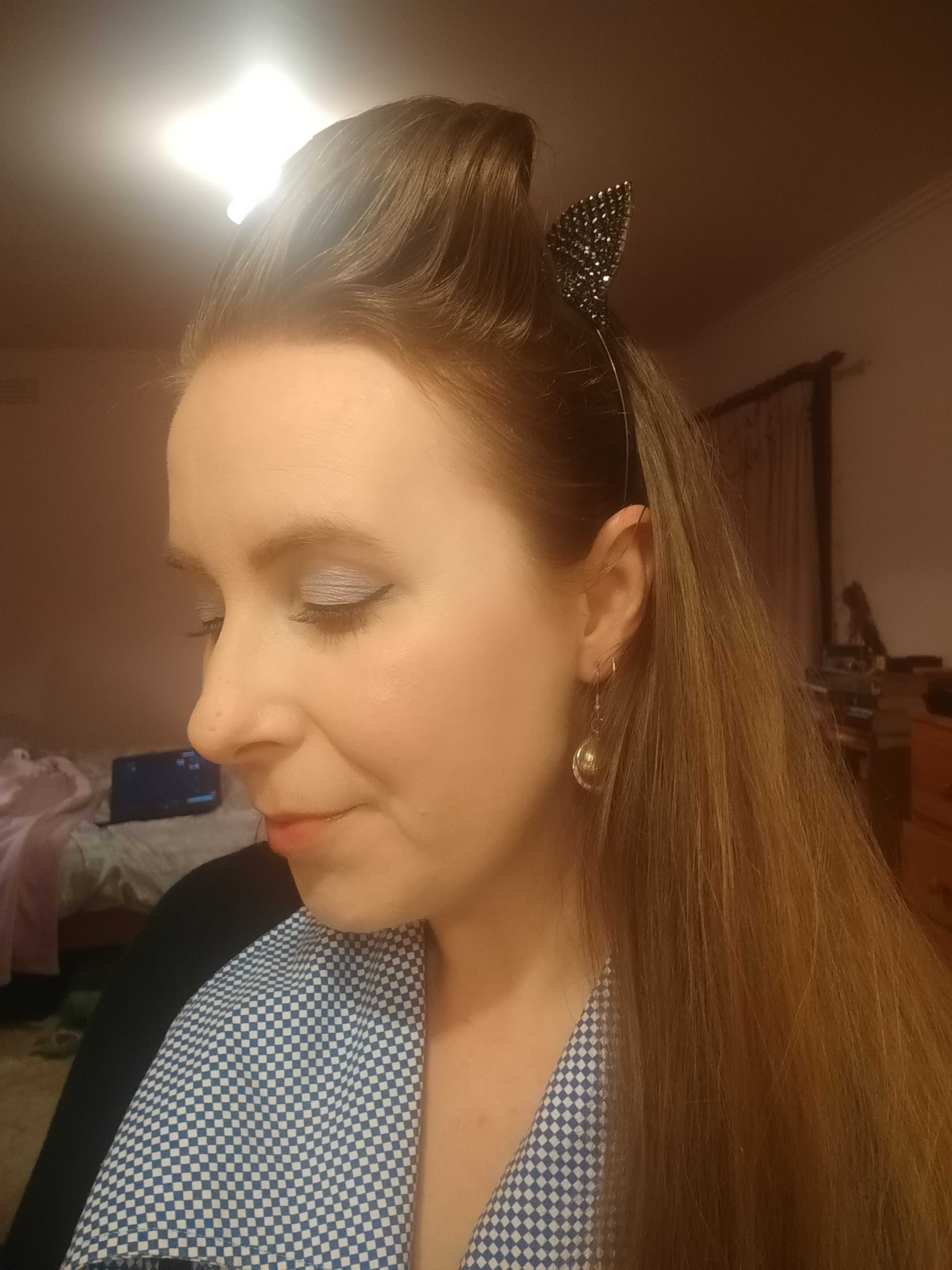 I went with a 1960’s inspired makeup look, with a pop of blue eyeshadow, cats-eye eyeliner and nude lips. 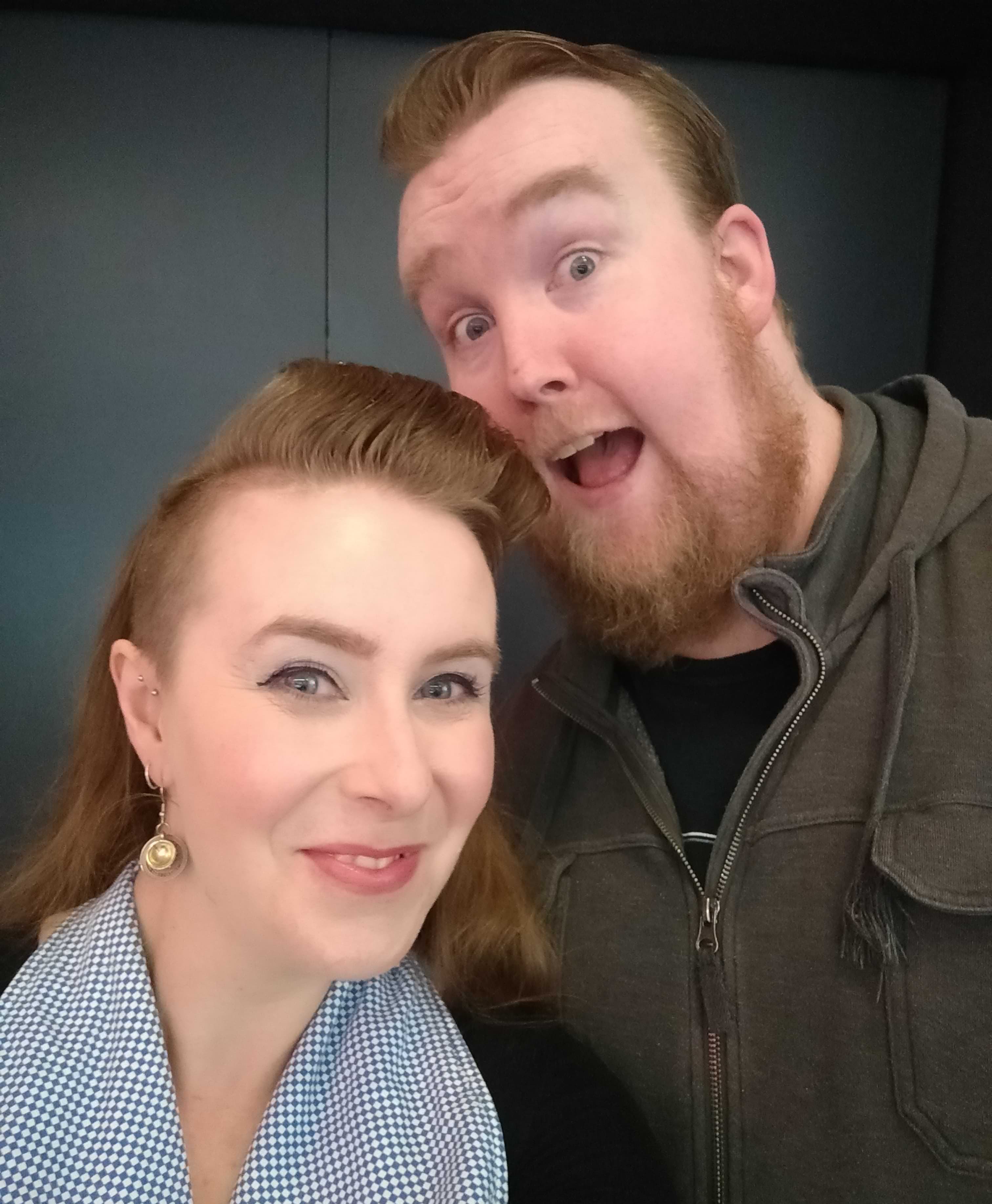 David and I snapped a few selfies while we were waiting to go into the gallery. At this point I was so excited and I was rearing to get inside and see what the exhibit had to offer. 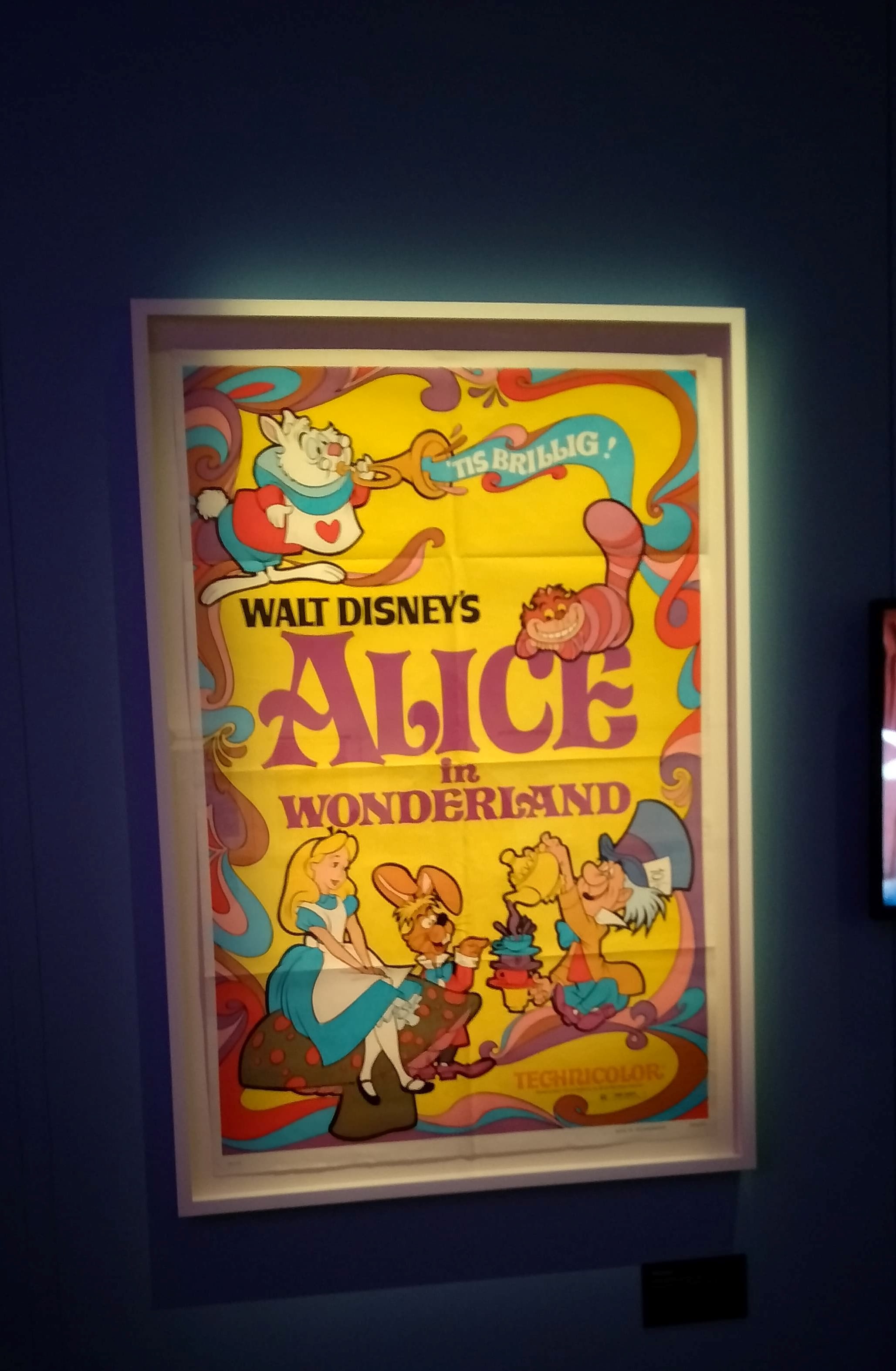 This was the first time I’ve ever been to an exhibition at ACMI where you have been allowed to take photographs inside.  I took quite a lot of photos but I don’t want to share them all because it would spoil the exhibit for any Melbourne-based readers who are yet to check it out.  There was so much to see and do, and the whole experience was very exciting and interactive.  There was a large section dedicated to Lewis Carroll himself, with original notebooks and letters in his hand.  The exhibit showcases costumes, props and artwork from many of the early Alice in Wonderland films as well as animation cells and concept art from the Disney version.  There are a lot of exhibits that show how certain visual effects were achieved and lots of props for you to take your picture with so that you look smaller or larger than usual.  My favourite part was a room filled with costumes and props from the Tim Burton version of Alice in Wonderland, including Alice’s suit of armour which is just stunning.  The exhibit ends with a tribute to all the ways that Alice has permeated pop culture, from Gwen Stefani’s music videos to The Matrix. 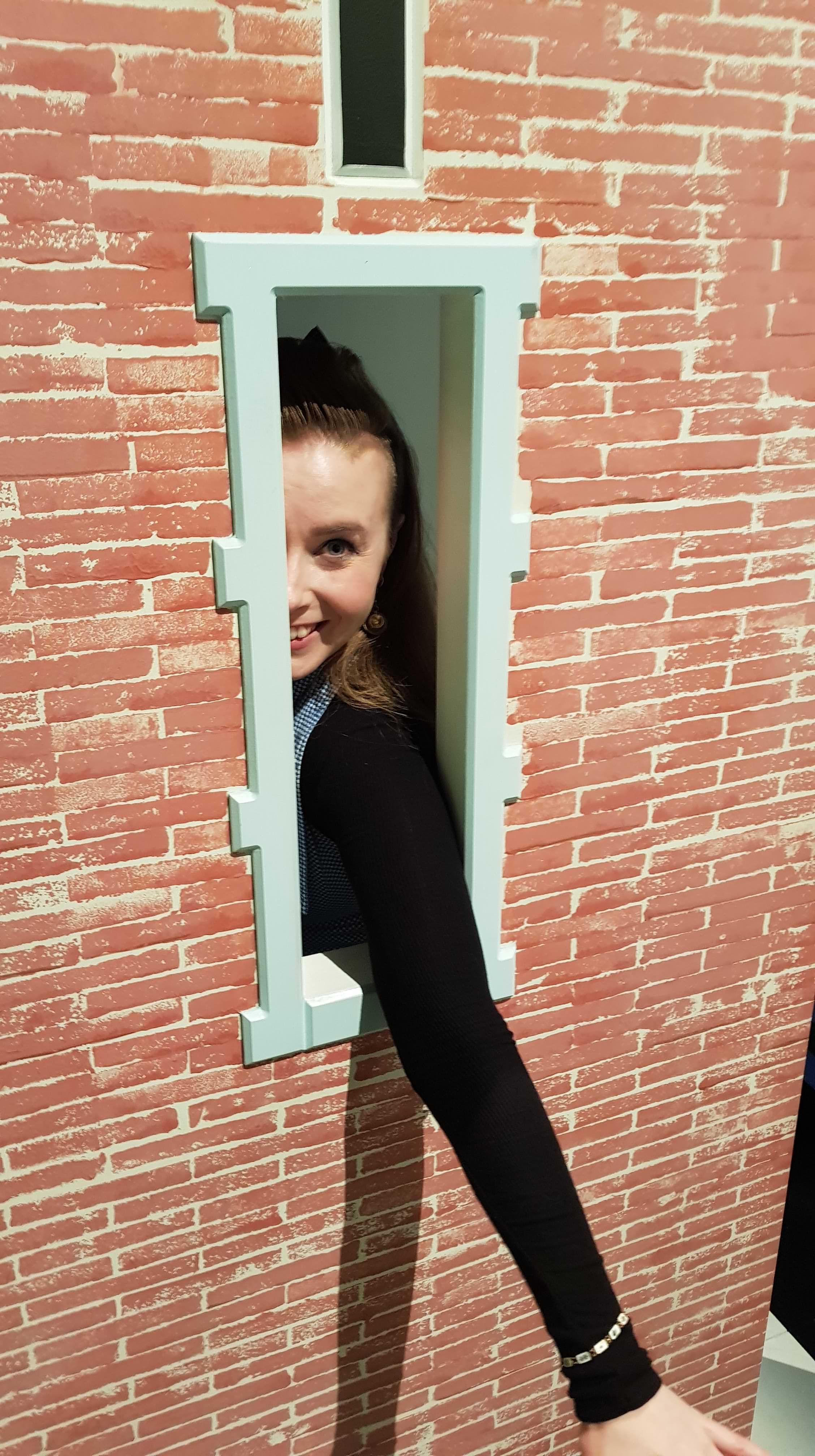 I had so much fun at ACMI and it was the perfect way to celebrate my birthday.  If you’re an Alice fan and you’re in Melbourne between now and the 7th October, I definitely recommend that you check it out.

What would you wear if you went to the Alice in Wonderland exhibition?  Would you take inspiration from Alice or a different Wonderland character?