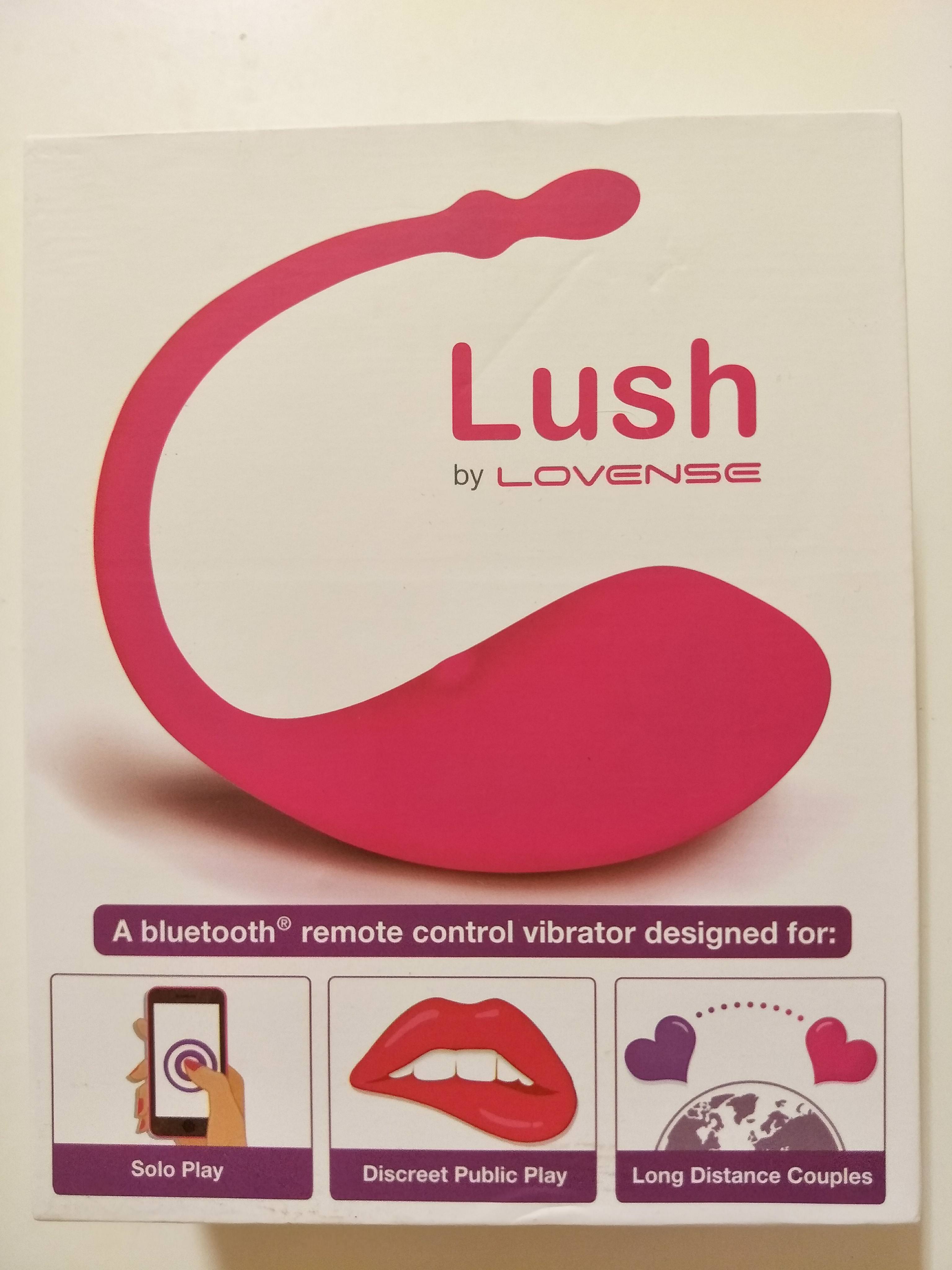 Fast forward to last month when Aphrodite’s Pleasure sent me a Lush of my very own to review.  I had extremely low expectations for this toy and truly believed that this review was going to be a slam-dunk.  I made a list of tests to put the Lush through it’s paces and set to work trying it out….

And time and again, this toy proved me wrong.  I went into this review fully expecting to hate this toy, but the Lovense Lush wooed me, seduced me and turned those expectations on their head.  If you’re also a sceptic, get ready to be converted.

To start with, let’s take a look at the basics.  The Lush by Lovense is a wearable vibrator with remote control via a smartphone app.  It’s made with 100% body safe silicone and feels buttery soft to the touch.  The Lush only comes in one colour: hot pink.  This is fine for me because I adore anything pink but some folks might not be jazzed that there are no other colour options.  The Lush is rechargeable and a full charge will give you between 1.5 and 2 hours of use.  This is a pretty decent amount of playtime for such a tiny toy. 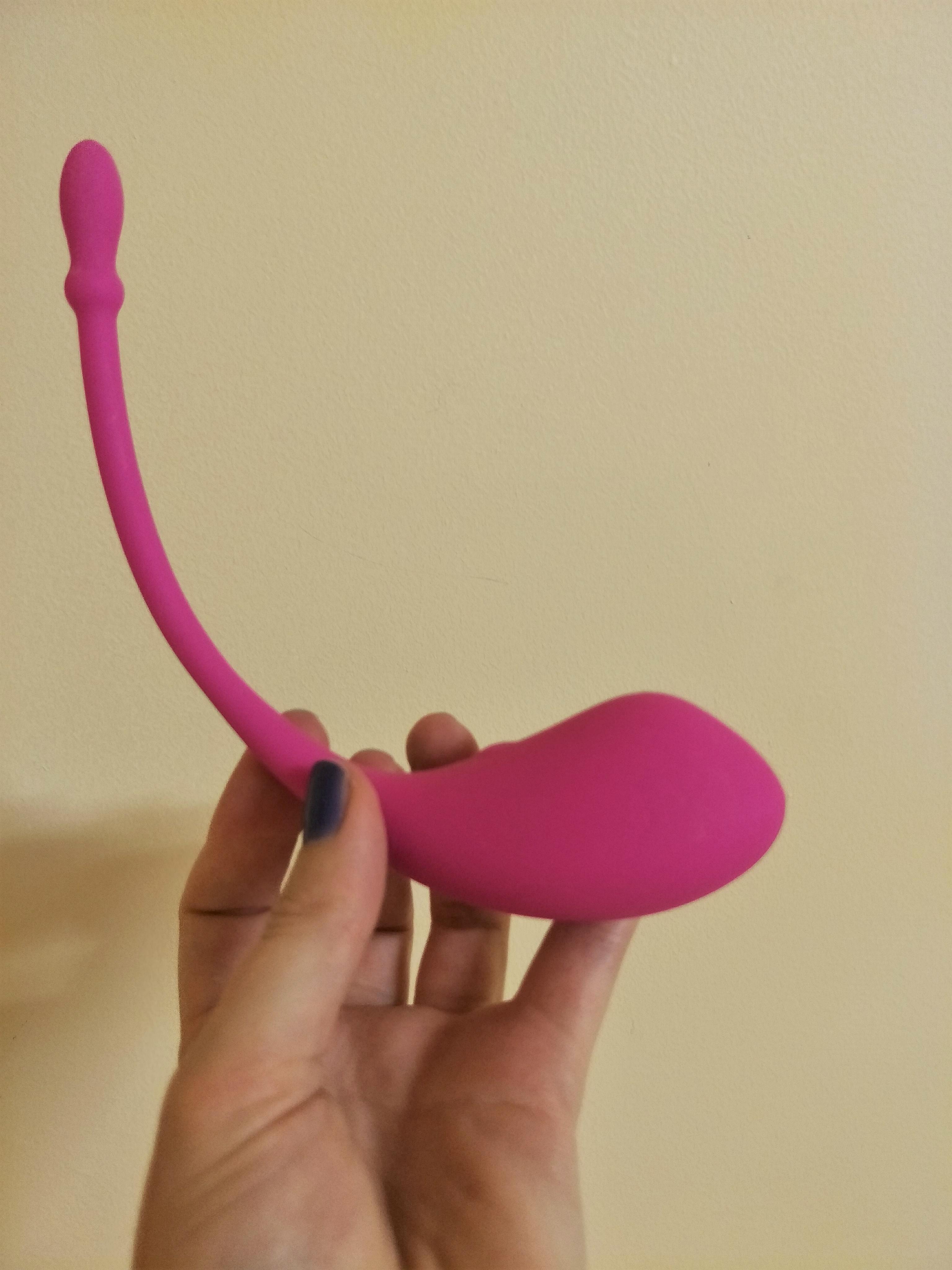 To use the Lush, you insert it into your vagina, with the tail outside your body.  The entire toy vibrates, including the little tail.  The vibration quality is top-notch.  I was utterly surprised that such a small package could deliver such deep, rumbling vibrations.  The Lush is cleverly shaped to target your g-spot when inserted.  The bulge at the top of the vibrator nestles against the front wall of your vagina to deliver strong sensation to your g-spot.  As if that wasn’t awesome enough, the tail sits between your legs and rumbles against your clit, although with less intensity than the insertable portion of the toy.  This dual sensation was a pleasant surprise, as I wasn’t expecting any external stimulation from this toy.  I can very rarely orgasm without clitoral stimulation, so the addition of the vibrating tail was a very welcome feature for me.  When inserted, the Lush is really comfortable and stays in place perfectly. 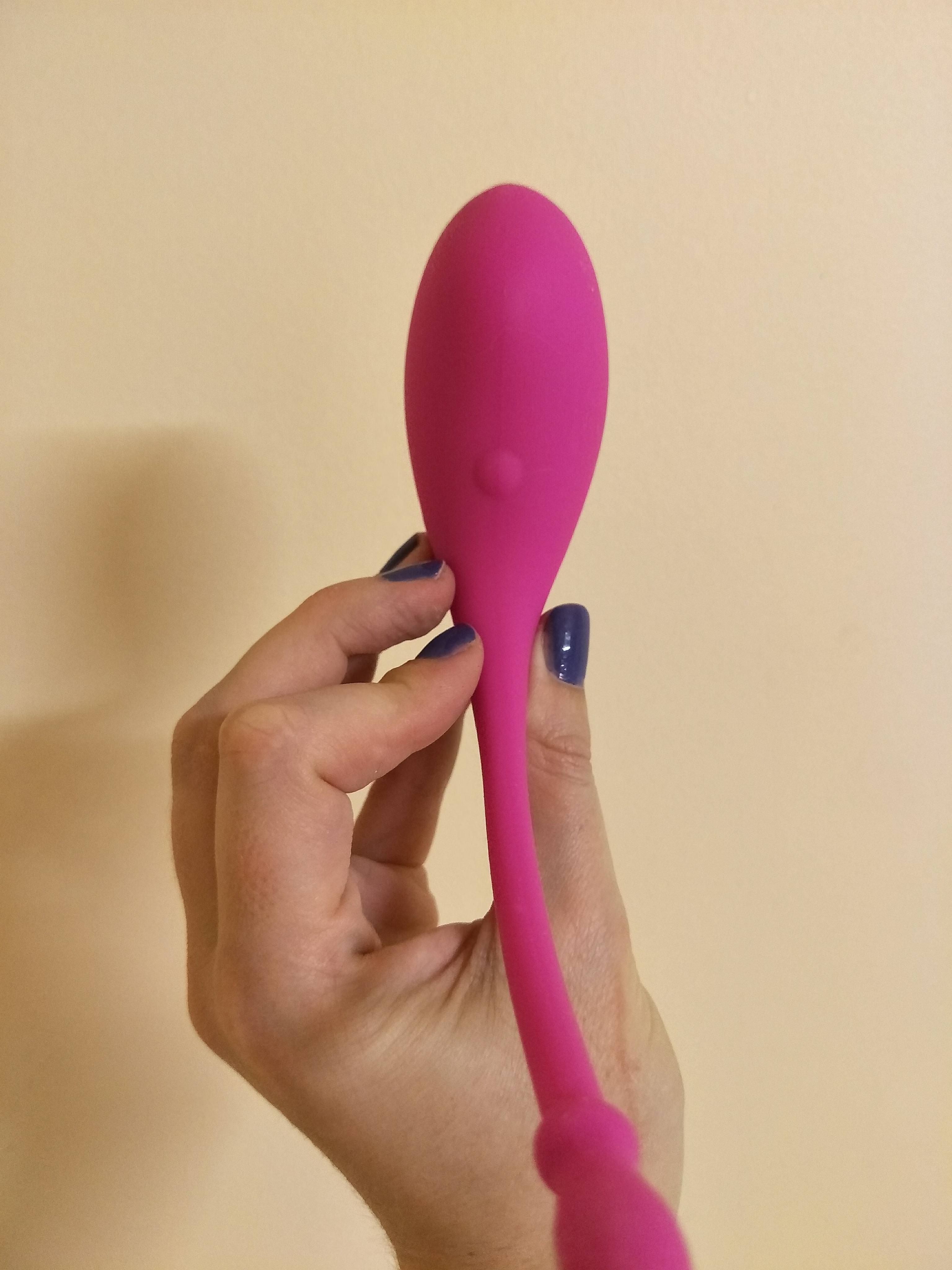 You can use the Lush manually or by remote control by pairing it with the app.  To use it manually, you press and hold the button to turn it on, and then click the button to turn up the vibration and cycle through the vibration patterns.  This is kind of awkward if the toy is inside you, as you have to fumble around in your vagina if you want to adjust the intensity.  Although manual use is a possibility, it’s pretty clear from the design that the Lush is intended to be used as a remote control toy.

The Lovense app is free to download and is compatible with Android and Apple products (you can even use your Apple watch to control it).  It’s super simple to use with really intuitive controls and a bright interface.  I was really impressed with the app and all the different features it offers.  Firstly, you can use the app as a basic remote control for your toy.  You can increase or decrease the intensity with the slide of a finger and create your own patterns.  I put the Lush through a bunch of different tests to check the range of the remote control.  It continued to work perfectly through several layers of clothing, under the covers of my bed and from several feet away.  I had expected that it might struggle to remain connected if I put on clothes or climbed under the covers but the Lush didn’t skip a beat.

Speaking of beats, the app also has a really cool music setting.  You can choose a song from your phone or your Spotify account and the toy will buzz to the music.  I took this feature for it’s maiden voyage to one of my favourite songs- Thriller by Michael Jackson and was excited yet puzzled by the result.  The feature was a lot of fun, but for the life of me I can’t figure out what the vibrations are synched to.  It doesn’t follow the beat, or the tempo, or the melody of the song that’s playing.  The pattern of vibration seems somewhat random, and yet it still feels like it’s working with the music somehow.  I experimented with many different songs and found the results interesting and fun (for the record, my favourite song to pair it with is Jungle Love by Morris Day and The Time).  I like using the music setting for foreplay, because it gives you a fun, random-ish pattern of vibration that is unpredictable.  However, I can’t get off using this setting because I need continuous and predictable vibrations or orgasm.  But it’s really fun to play with to tease yourself.

While the Lush is a lot of fun to play with on your own, it really shines as a couples vibrator.  The app has a long-distance setting that is nothing short of fantastic.  Basically, your partner downloads the app, and you give them permission to control your toy remotely.  Your long-distance lover can then control the vibrations of your toy from anywhere in the world.  There’s even a chat function, so that you can talk dirty and send sexy pictures while you play.  I live three hours from my partner, and we had so much fun with this function.  It was amazing to let him take control and actually be able to remotely hold my orgasm in the palm of his hand. The first time we tried it, it was a little strange because of the lack of feedback.  He wasn’t sure if it was working until I texted him to tell him I was enjoying myself.  But pair this toy with skype or facetime, and you’ve got yourself a seriously fun long-distance sex date. I also like the fact that you can block users from controlling your toy, so if your romance turns sour you don’t have to worry about your ex hijacking your vibrator. 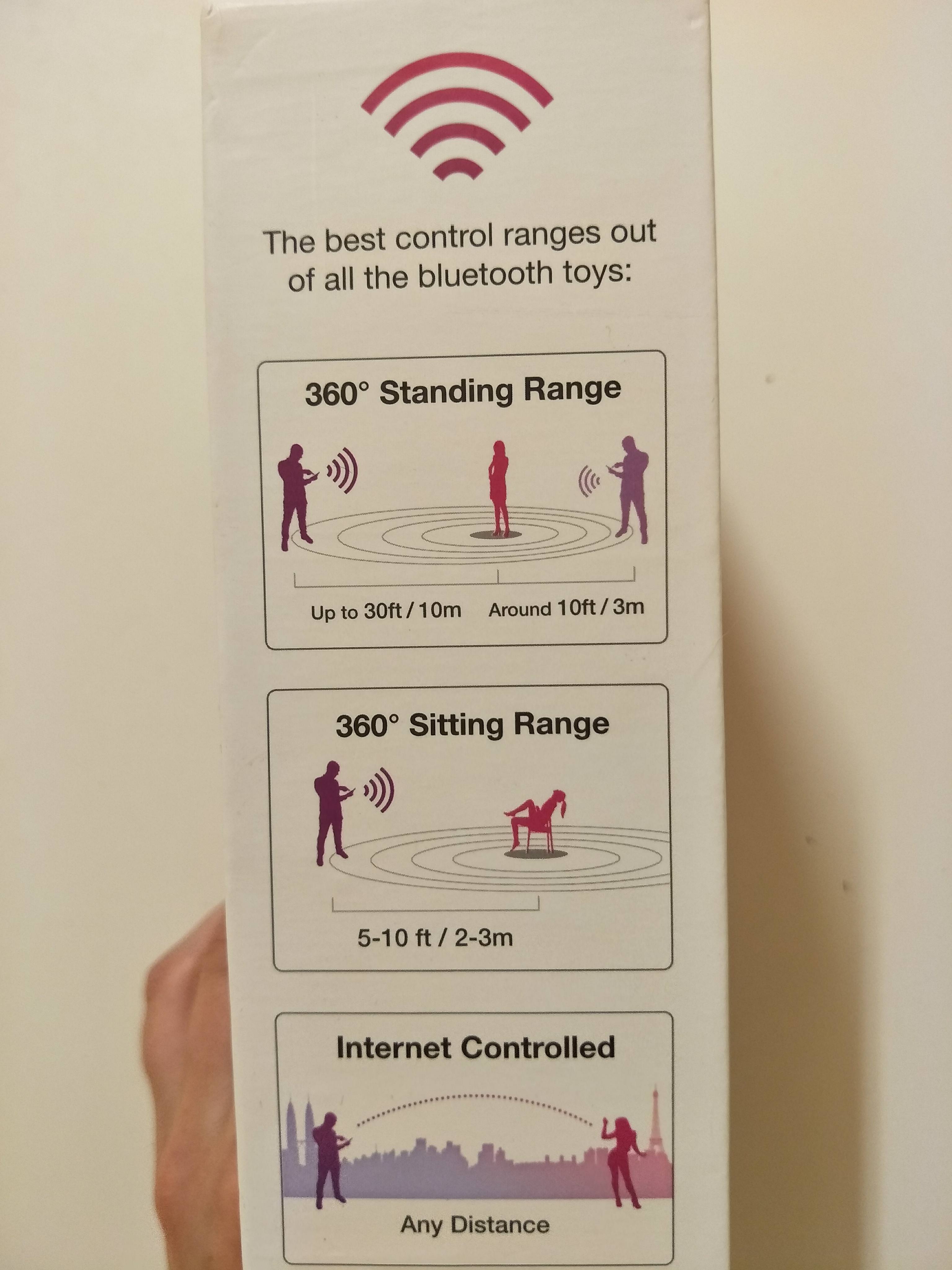 One reason that a lot of people are drawn to wearable vibrators is because they open the door to public play. Just imagine that you’re wearing a vibrator and nobody knows except your partner, who is holding the remote control.  And at any moment they could press the button and send you into a quivering mess while you desperately try to contain yourself.  Unfortunately, most wearable vibrators that I’ve encountered shit all over this fantasy.  They’re either so uncomfortable that you can’t stand to wear them for an extended period, or they are super loud so everyone within ten metres can hear your panties buzzing.  Either that or they’re weak and aren’t really good for much more than a lack-lustre fizz.  The Lush is the first toy I’ve used that is actually practical for public play.  Firstly, it’s really comfortable to wear, and sits discreetly under your clothing.  Secondly, even at it’s highest setting, it’s practically silent once you’ve inserted it.  I could not believe how quiet this toy was, and I’ve worn it in public without anybody raising an eyebrow.  Finally, the vibrations are strong enough to feel amazing, so you can actually play with real pleasure rather than tiny pings and buzzes.  The remote has a fairly good range, up to 10m when standing or 3m when sitting, so if you’re at the movies or out  to dinner then you’re well within range for play.  The one slightly awkward thing is that you need to turn the toy on before play.  So if you’re walking around with it on, the batteries are going to be draining and your playtime might be cut short.  But realistically, this is a pretty minor downfall.  For public play, the Lush ticks almost every box.