This is a review that I’ve been trying to write for several months.  I bought the Stronic Zwei nearly two years ago, and it’s taken me this long to finally sit down and tell you about it.  I feel a real internal push-and-pull about this toy.  There are so many things that I love about the Stronic Zwei, and yet…..overall I’m underwhelmed.  And my reaction is partially due to the toy itself and partly due to my own expectations, so it’s kind of hard to land on a definite opinion of the Stronic Zwei.  Some days I love it, and some days I want to hurl it across the room.  But let’s go back to the beginning.

I stumbled across Fun Factory’s Stronic line when I was hunting for a new toy to add to my collection.  I was on the lookout for something new, some exciting hook that would set it apart from other toys.  And I believed that I had found it in the Stronic toys.   See, Fun Factory’s Stronic toys aren’t vibrators…they’re pulsators.  The shaft encases a magnetic plate that moves back and forth, creating a thrusting motion.  I was eager to try this pulsation for myself and spent a long time deciding which of the Stronic toys to purchase.

At the time, there were three Stronic pulsators available: The Stronic Eins, The Stronic Drei and the Stronic Zwei.  (Fun Factory has since added the Stronic G to the collection).  I spent a long time weighing up the three designs before I settled on the Zwei.  I didn’t like the long, mostly straight shaft of the Eins, because I felt the shape would bypass my g-spot.  The Drei had the curve I wanted, but I was put off by the extreme ridges which I worried would feel uncomfortable and be difficult to clean.  I settled on the Zwei because I liked the sweeping curves and smooth finish.  I was a bit wary of the fact that the Zwei is marketed as a prostate toy, but there are plenty of prostate toys that work amazingly well for g-spot stimulation so I was willing to take a chance. 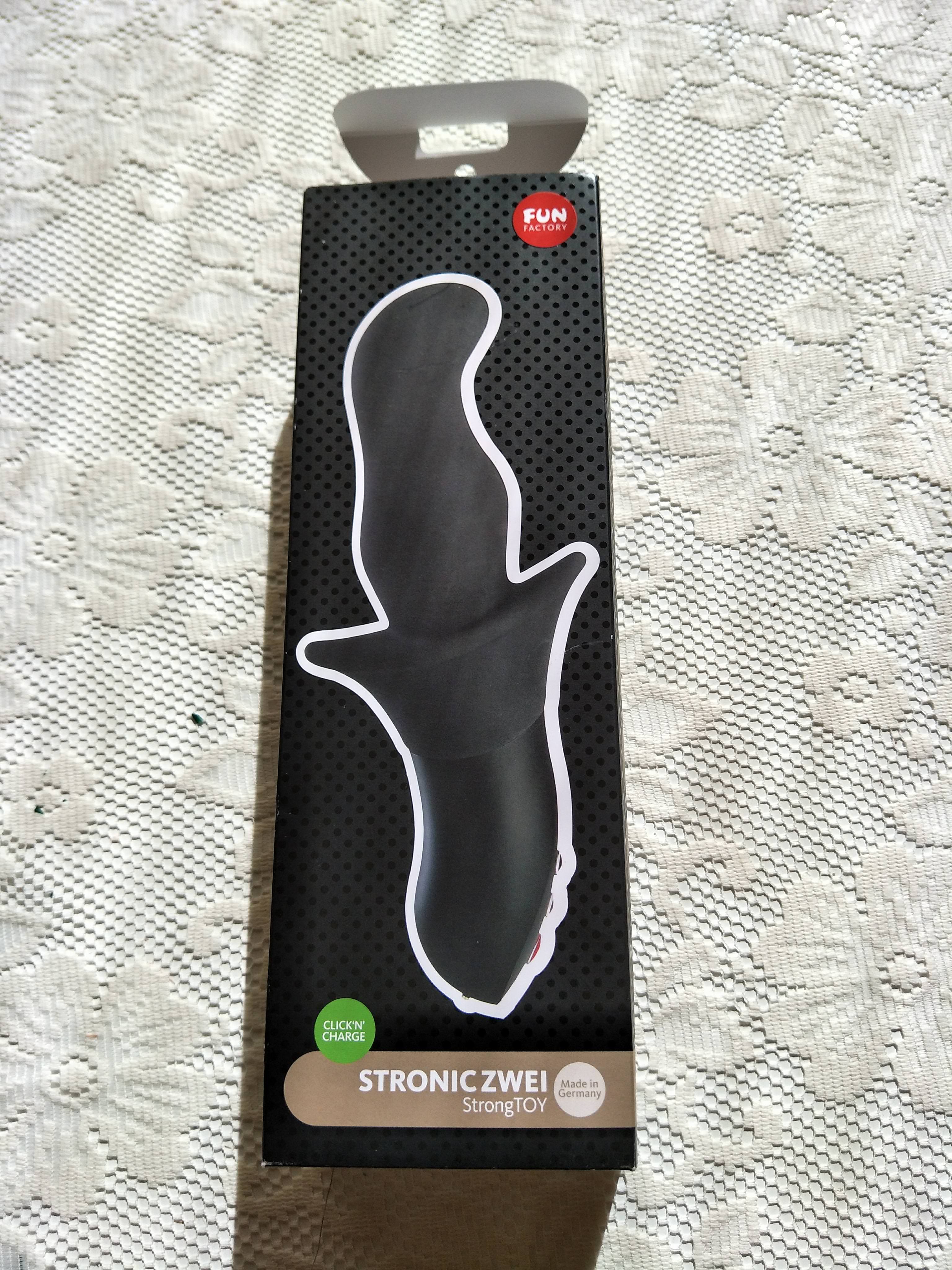 When I lifted my Stronic Zwei from it’s box, I was instantly smitten by the physical features of the toy.  The shaft is the most delicious, velvety silicone that feels luxurious to touch.  The handle is hard plastic and the whole toy is quite hefty.  The three raised buttons are smooth and easy to press, but not so sensitive that they’re likely to get accidentally pushed during play.  The Stronic Zwei reminds me of a sexy pirate sword with it’s firm handle and flared pommel. 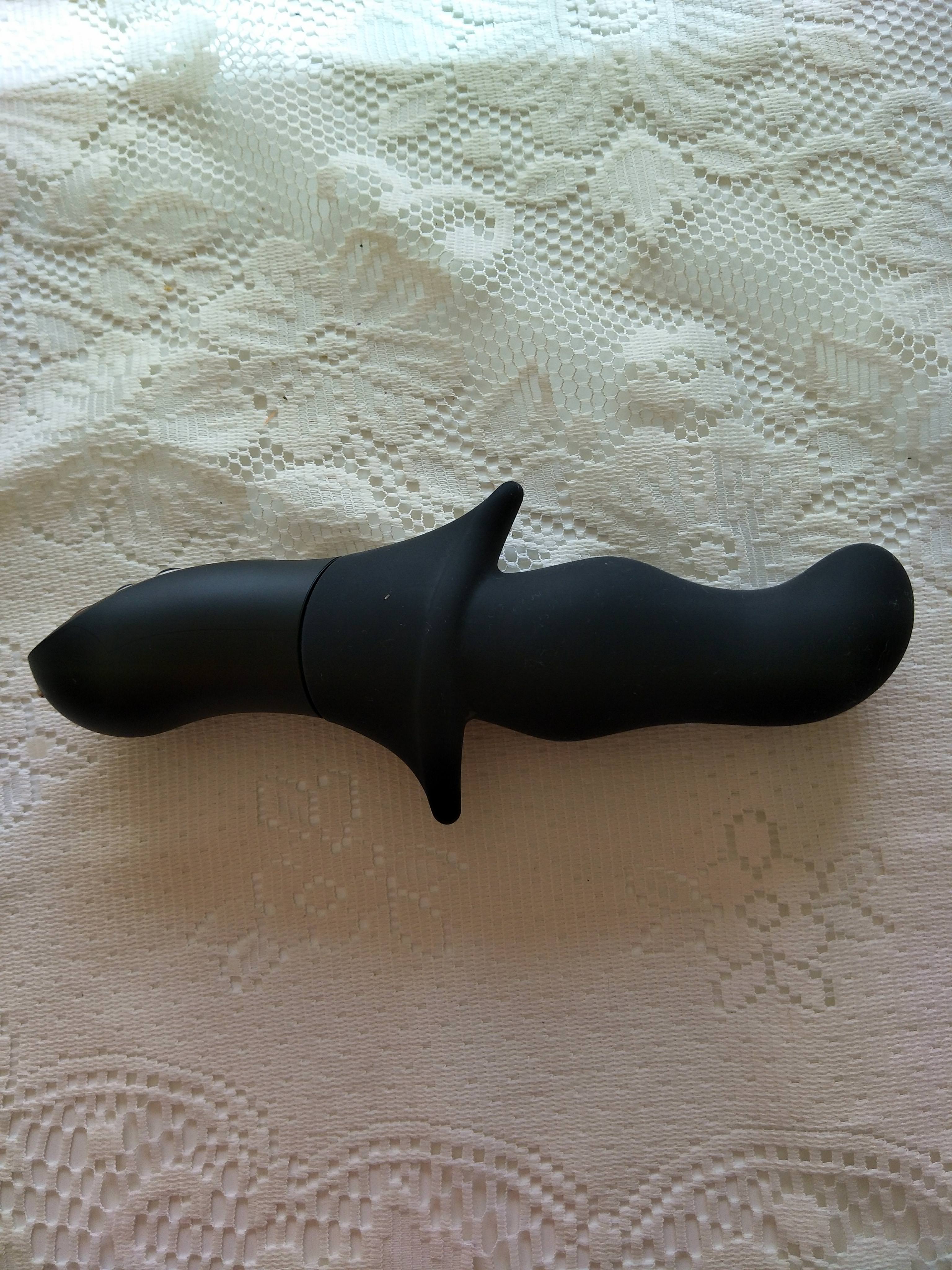 Sadly, once I put the toy into use, some of these features showed their darker side.  That velvet silicone is a total dust-magnet and this toy picks up every hair and speck of lint in the vicinity.   This toy is also the worst lube-hog in my collection.  The soft finish just seems to dry out lube exceptionally quickly, which sucks because you need quite a generous amount of lube to use this toy successfully. 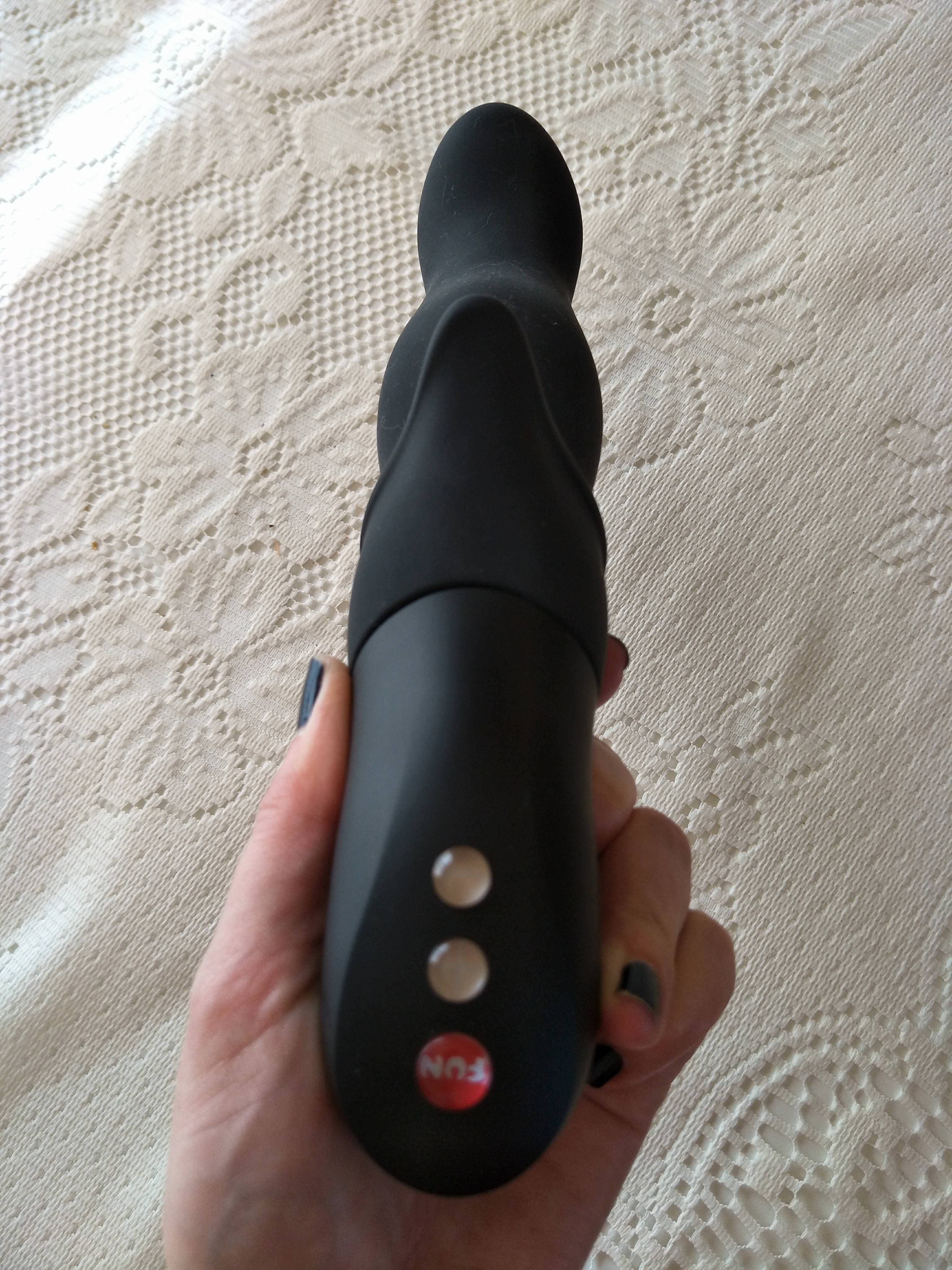 The Stronic Zwei’s controls are fantastic.  They’re easy to use, intuitive and simple.  To turn the toy on and off, you press the big red FUN button.  The plus and minus buttons allow you to cycle through the different pulsation patterns.  I adore the fact that you can turn the toy off with a single click of the FUN button. The Zwei is also equipped with a travel lock so that your toy won’t accidentally get turned on in your luggage.  However, I’ve found this feature redundant because this toy is too freaking heavy for me to consider taking it with me when I travel.  It’s possibly the only toy that has been left behind on every single journey to my partner’s house, solely because it adds far too much heft to my luggage.

My play sessions with the Stronic Zwei have been equal parts joyful and frustrating.  When it works, it’s magnificent, but when it doesn’t it’s an orgasm-killer.  And it’s taken me a lot of trial and error to get to a point where I have at least as many positive sessions as sigh-inducing ones.

The main issue I have with the Zwei is a common one with most toys do anything other than vibrate.  See, when you look at such a toy on a display, and you see it thrusting away merrily, it looks really impressive.  But as soon as the business end of the toy encounters resistance (for example, when it’s buried in your vagina or anus) everything comes unstuck.  What usually happens is that the movement gets transferred to the handle, because the shaft of the toy is being held still by your body.  So in order to stabilise the toy, you have to hold the handle firmly in place.  And even then, this often results in a muffling of the motion.  I’ve never experienced the same level of movement during use as you’d get with a toy that’s just wriggling about on a display.

This is definitely the case with the Zwei.  If I try to use it hands-free, it pumps away merrily and quickly slides out of my vagina.  If I’m not holding it, it absolutely won’t stay in position for more than a few seconds.  But if I hold the handle too firmly, the pulsations pretty much grind to a halt.  So I’ve had to experiment to find just the right amount of pressure on the handle to keep the toy in place, but also to make sure that the pulsations are still powerful enough.  And if my grip varies slightly in either direction, then pleasure quickly morphs into frustration.  So often, I’ll be on the edge of an orgasm and tense or relax at the wrong moment and the toy will either freeze or slip from position, resulting in me wrenching it from my genitals and reaching for a more reliable vibrator.

One thing I will say in favour of the Zwei is that it’s magical as a manual dildo.  If I use it without switching the motor on, it gets me off every time.  The firm handle gives me plenty of leverage to thrust with.  The curved tip finds my g-spot effortlessly, and has an ideal firm-yet-squishy texture that massages it to perfection.  The weight of the shaft means that thrusting with your hand feels powerful, even if you’ve got weak spaghetti arms like I do.  It’s just a shame that I can’t get these orgasmic results using the toy the way it’s intended to be used.  It feels like a bit of a waste. 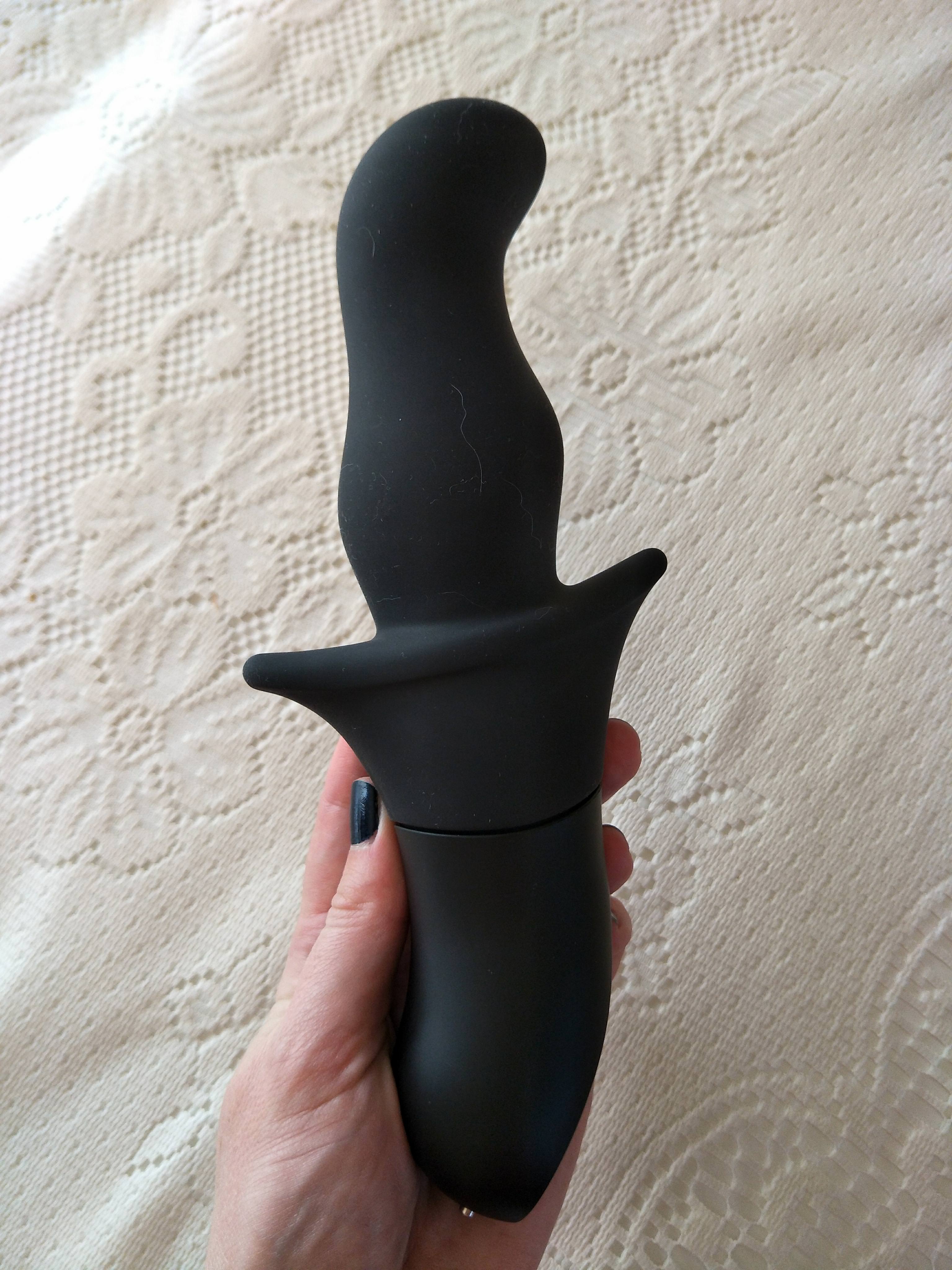 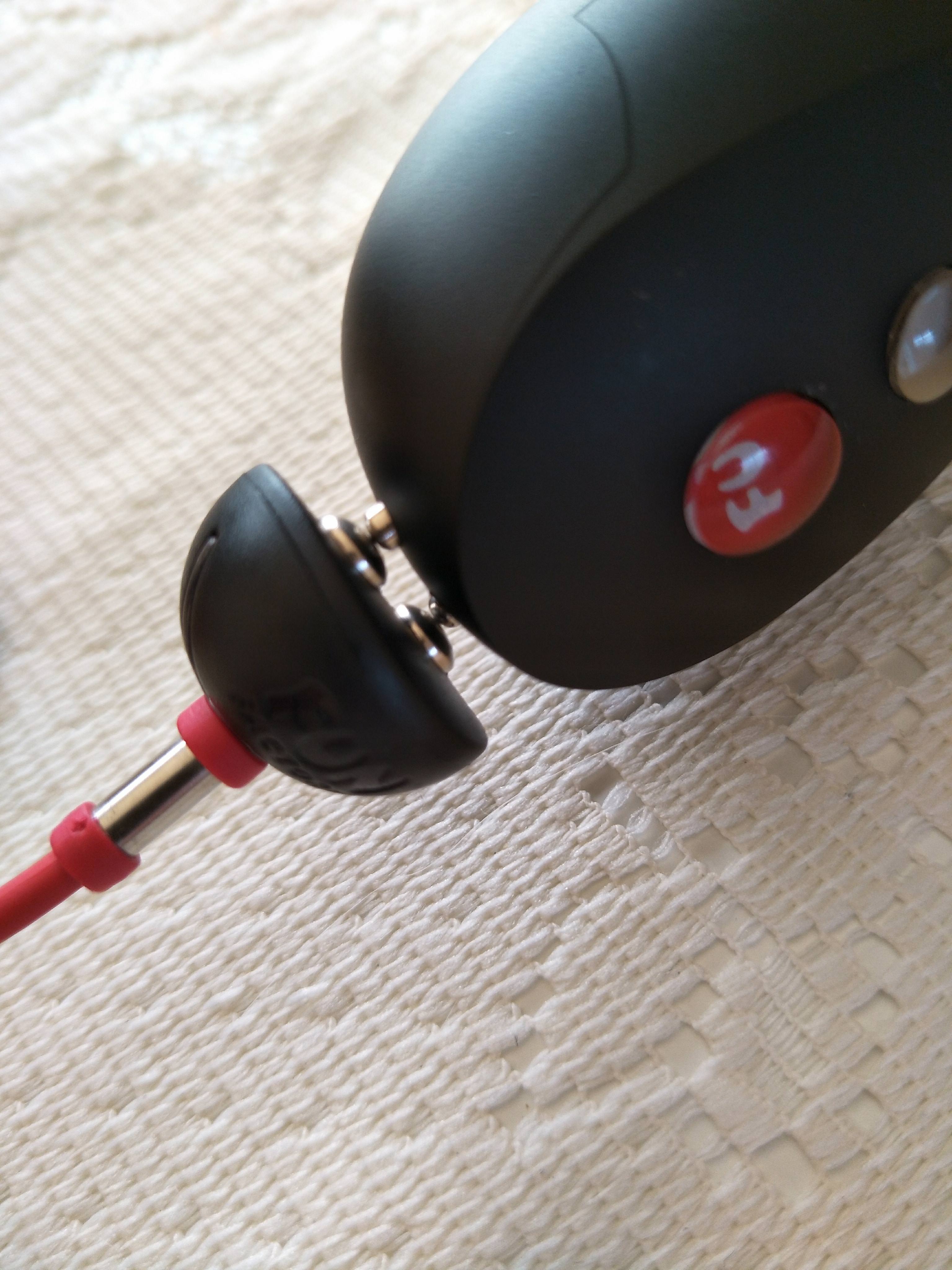 The Stronic Zwei comes with Fun Factory’s click-and-charge charger, which attaches to the base of the toy with a magnet.  Normally I’m not a fan of magnetic chargers, because it’s really easy to knock them out of position but this one makes strong contact and stays in place.  The fact that there is no open charging port means that the toy is waterproof and can be submerged for underwater play and easy cleaning. 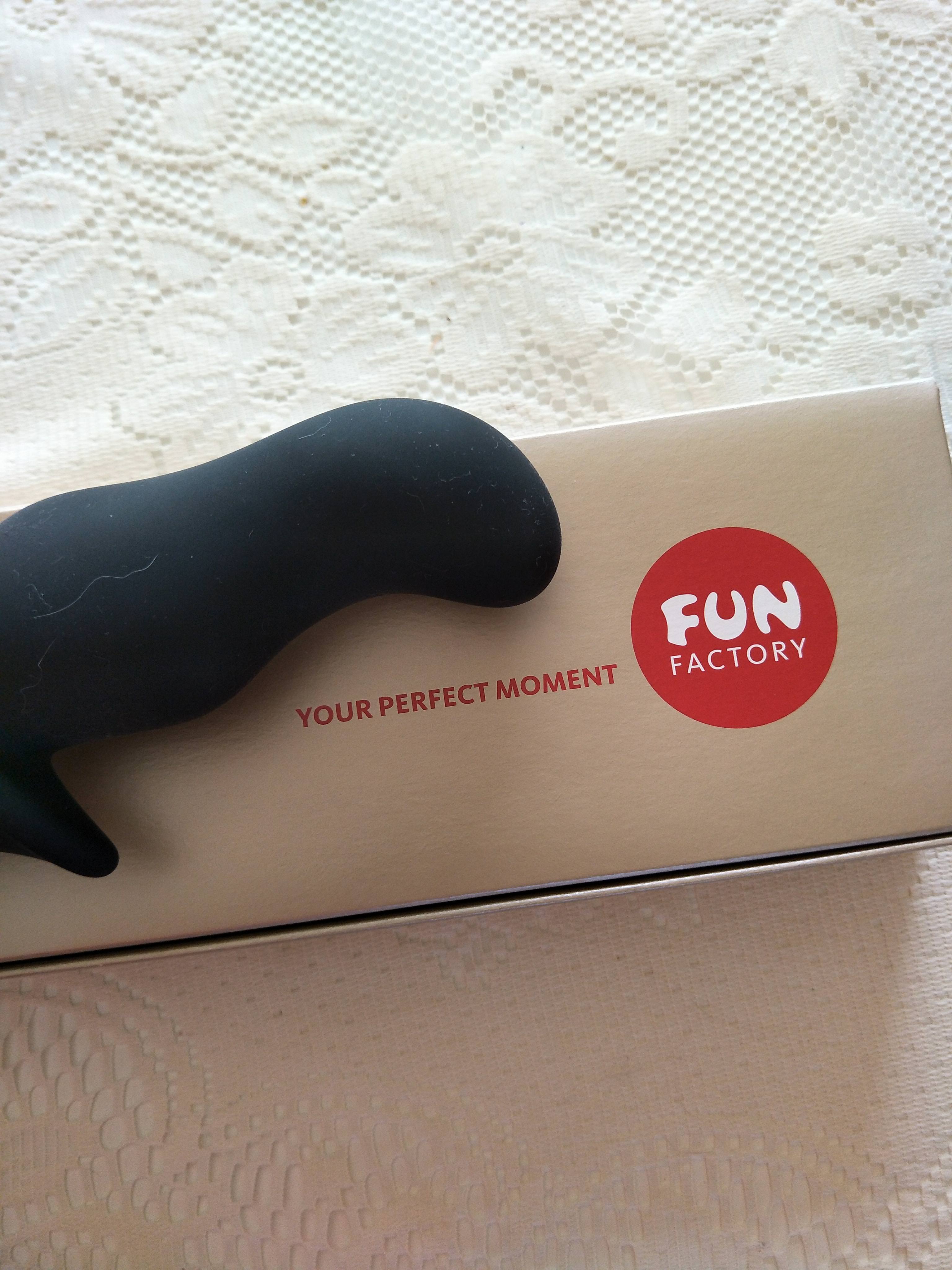 Now, as this is a luxury sex toy, it comes with a luxury price tag.  The Fun Factory Stronic Zwei costs around $250 at full price.  I got mine on sale for $200, but it still makes it the most expensive toy in my toybox.  And honestly….I don’t think it’s worth it.   Although the toy has some amazing features and is a really innovative design, I just don’t think it’s worth paying $200 for.  Now, I take full responsibility for the fact that I chose not to buy either of the toys that are designed for vaginal use, and instead went for the prostate massager.  It’s possible that if I’d bought one of the other two designs, I might have had a better experience.  But I’m still dubious, because I don’t think that the Eins or Drei are so dramatically different that they would stay in place more effectively.  Now that Fun Factory has released the Stronic G, which is more targeted for G Spot penetration, I’d be keen to give that a shot.  But I’m not curious enough to pay upwards of $300 to find out if it’s a more effective toy.