The shape of the head is another thing I love about the Rumble.  While most wands have a rounded shape, the Rumble is flatter on top, almost like a hockey puck.  While I thought this was kind of odd at first, once I began playing I appreciated this shape.  Having a flatter head gives you a lot more options when it comes to sensation.  If you prefer a broader surface area for stimulation, then you can angle the entire top of the head on the area you’re playing with.  With a slight twist, you can use the edge for more pinpointed stimulation. I also like that the head is mounted on a swiveling base.  The base absorbs some of the movement and makes it great for grinding against.  Sometimes when I’m using a vibe for clit stimulation, it can feel like I’m just mashing it against my crotch.  But the Rumble feels more like a massage.  It stays on target and moves with you as you thrust and grind. 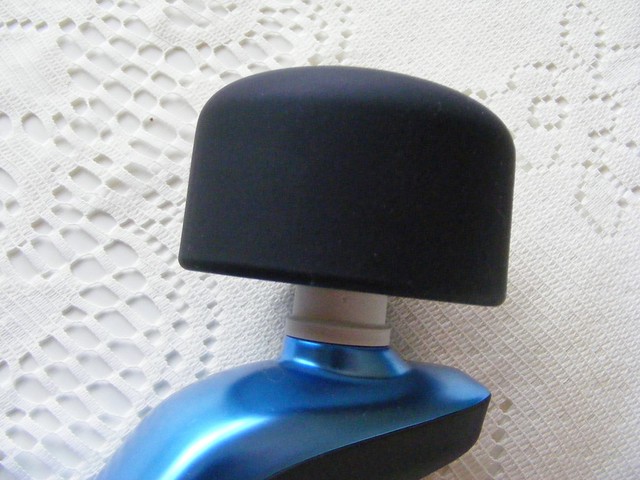 In terms of vibration quality, the Rumble lives up to it’s name.  The vibrations are really deep and rumbly.  This toy is relatively quiet, although it does get a bit buzzier on the higher settings.  I’ve read a few reviews that stated that the Rumble is not powerful enough.  Now, the amount of power you want in a vibrator is a very personal thing.  Nobody wants a wimpy little buzz against their clit.  But every body is different and the level of stimulation needed varies hugely across the board.  I’m sure that for some people, the Rumble may not offer the whallop they require.  But for me, it works beautifully.  There are three speed settings and I’ve never gone above “medium” during a play session.  The Rumble is plenty powerful enough for me, and I like quite a lot of stimulation.

Let’s take a moment to look at the control panel on this toy.  The controls are very simple and easy to use.  The power key switches the toy on and off.  The + and – keys allow you to turn the intensity up and down and cycle through the different vibration patterns.  I like having the option of moving back and forth through the patterns, rather than having to cycle through the entire range to get back to the one you accidentally skipped.  I am also a fan of the on-off switch, because it means you can quickly flip the toy off if someone knocks on the door, rather than having to hold down a function button for several seconds.  The controls are conveniently placed so that you aren’t likely to accidentally press them during play.

The only thing that disappoints me about this toy is that it doesn’t have a travel lock.  Most rechargable toys have a locking function, so they won’t accidentally start buzzing in your bag (causing embarrassment or worse: a flat battery when you reach your destination).  I am in a long distance relationship and I travel often to visit my partner.  Sadly the Rumble has missed out on every single trip, solely because it can’t be locked.

The other downside to the Rumble is that it isn’t waterproof.  While I rarely take my toys into the tub or shower, I do like waterproof toys for ease of cleaning.  It’s so much simpler to be able to dunk a toy in the sink rather than carefully wiping it off.  However, the buttery-soft silicone cover on the head of the Rumble slips off, so you can thoroughly clean this part in the sink.  The head is the bit that gets the dirtiest when I use it, so it’s awesome to be able to wash it under running water.  The handle does get a bit grimy but I’ve found a quick wipe with a cloth is enough to get rid of any residue.  The fact that there are no cracks or crevices for dirt to hide on the handle makes this a relatively easy toy to clean.