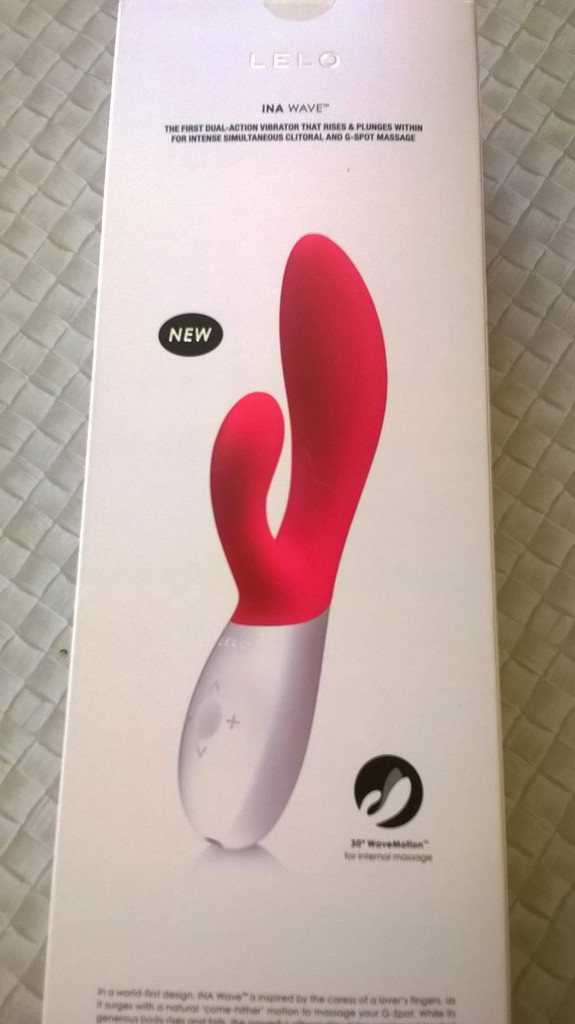 Upon opening the box, I was greeted with a a contraption that looked more like Dr Zoidberg’s claw than any sex toy I’ve ever seen in my life.  However I was impressed with the hot-pink shade and the gorgeous packaging.  I was curious to try the Ina Wave out, but  I also felt a tiny bit afraid of the extreme shape. 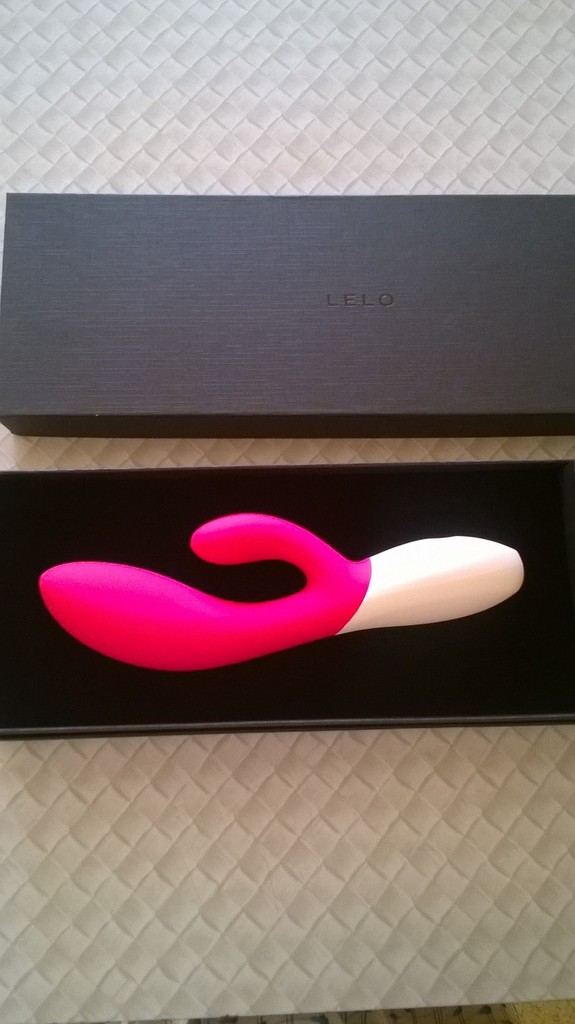 Upon removing the Ina from the box, I was taken aback at how awesome it felt.  The silicone is velvety and super soft, and even the handle is silicone.   There is a slight lip where the handle meets the rest of the toy, but it’s very tightly closed so it’s a lot easier to clean than the Soraya.  The buttons are set into the handle, and the overall look is very smooth and modern. 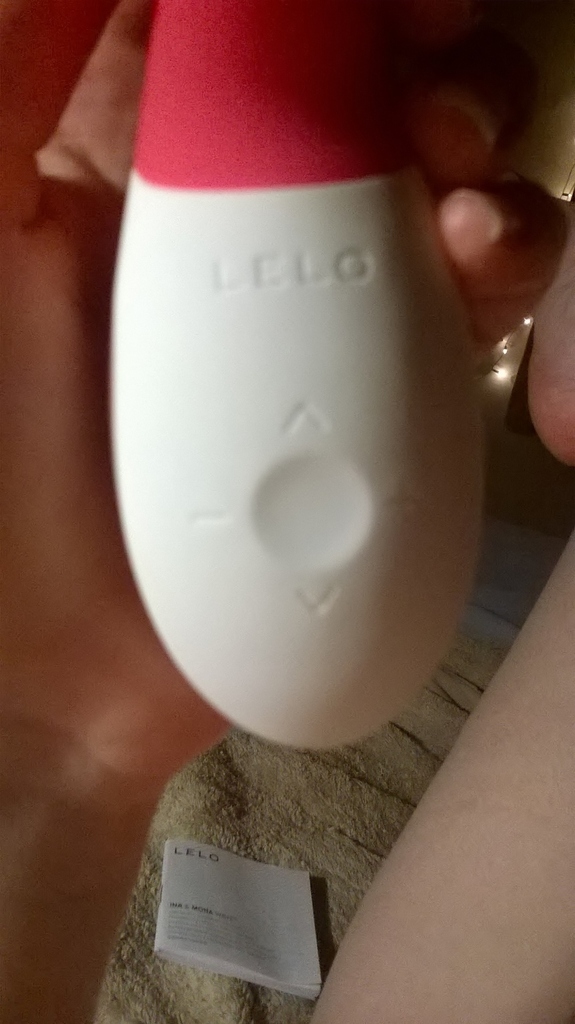 The Ina Wave promises a “blended orgasm” by simultaneously stimulating the clitoris and the g-spot.  Now, a lot of rabbit-style vibrators offer this kind of dual stimulation, but the Ina Wave has something extra special going for it.  The insertable portion of the toy does this unique ‘wave’ motion, curling upwards to apply pressure to the g-spot.  I have been experimenting with g-spot play recently, so I was very keen to see if I could use the Ina Wave to achieve the coveted blended orgasm it so confidently promised.

Let me begin by saying that this toy has a real learning curve.  To begin with, I found it a little tricky to insert.  The insertable part is quite girthy, and has a large bump on the front edge.  Initially I found it difficult to maneuver that shape past my pubic bone.  I also had difficulty with the clitoral arm, which is a much tighter fit than any rabbit vibe I’ve ever owned.  The arm was really hampering my ability to insert the toy, until I realised that the arm is very flexible and can be bent back quite easily.  Once I figured that out and found the right angle, the toy slid in easily.

Once I had the toy inside me, the tight fit of that clitoral stimulator became all the more apparent.  I mentioned in my review of the Lelo Soraya that the clitoral arm on that toy was too widely-set to hit my clit squarely.  This toy was the exact opposite.  The clitoral stimulator sat perfectly on my clitoris.  In fact, the tightness of the toy caused it to kind of clamp down on my clit, applying a lot of pressure to that area.  I’d never experienced that sort of pressure in that spot before, and I actually really liked it.  But if you know that you prefer a lighter touch on your clit, this might not be the toy for you.  Similarly, if you know your clitoris and vaginal opening are more widely-set, then you might have difficulty getting the toy to reach all the important zones.  But for me, it was a perfect fit.

The Ina Wave has a good variety of settings, and it’s very easy to use.  The arrow buttons cycle through the settings, and the + and – buttons control the intensity.  The button in the centre turns the toy on and off.  I liked this immediate-off switch, which was missing from the Soraya.  I find that once I have an orgasm, I become quite sensitive and it’s nice to be able to switch the toy off quickly to rescue my poor genitals from over-stimulation.  The Ina Wave has a variety of internal and external vibration patterns without the wave function, so you can use it like a traditional rabbit vibe.  But you can also cycle through several wave functions, which combine vibrations in the shaft and clit arm in different ways.  You can also just turn on the wave function with no vibration.  There are a lot of settings to choose from and play with on this toy.  The vibrations are very deep and rumbling and the toy is one of the quietest I’ve used.

After a bit of playing, I switched on the wave and was instantly aware of the handle of the Ina flapping about between my legs.  As the toy was lodged firmly in my snatch, the motion of the wave transferred to the handle.  Like I said, this toy has a learning curve!  I quickly learned that I had to hold the handle quite firmly to steady it so that the shaft had enough leverage to stimulate me internally with the magical “come hither” motion.

And it is magical indeed.  If you’re looking to experiment with g-spot stimulation then this is the toy for you.  That bulge in the front is perfectly angled and hits my g spot effortlessly.  If you’re not sure where your g-spot is, I’m confident that this toy would be a great help in finding it.  One thing I’ve learned over time is that my g-spot, and indeed many g-spots, prefer pressure to vibration.  And that gorgeous wave motion is like a couple of strong fingers pressing firmly into that sensitive spot over and over.  Couple that with the deep, rumbly vibrations and you’ve got a recipe for a delicious orgasm.  I got that coveted blended orgasm on my very first try, and countless times since.

(Psst!  If you are intrigued by the idea of the come-hither g-spot stimulation, but don’t like rabbit vibes, then you might enjoy the Mona Wave.  It’s basically the Ina minus the clitoral arm)

As I mentioned, the Ina Wave does put a lot of pressure on my clit.  But one thing I really like is that the flexibility in the clitoral arm perfectly accommodates the shaft’s motion.  So instead of pinching your clitoris, it gives this gorgeous massage.  The best way I can describe the sensation of this toy is that it’s like having my clitoris massaged from the front and back all at once.  It feels so pleasurable.

Another awesome feature of the Ina Wave is that it’s waterproof!  It can be submerged up to 1 meter.  This makes cleaning a snap, because you can wash it off in the sink.  It also means that you can take your toy into the shower or tub for extra fun.  This is great if you have roommates and the only private time you have is in the shower or bath.

The Ina Wave has a travel lock feature too, which is essential for rechargeable toys, because you can’t simply remove the batteries.  The battery life on this toy is phenomenal.  I’ve had it for several months, have used it a couple of times a week and I’ve only charged it twice.

Another huge thank you to the folks at Lelo for sending me this toy to review.