So everyone knows how excited I am about alternative menstrual products, right?  I mean, I talk about menstrual cups all the darn time.   But as much as I love my Lunette Cup, I’m always eager to try out new products when they hit the market.  And I recently caught wind of a clever-pants item that I wanted to take for a spin.

Thinx period panties are basically underwear that you wear when you’re on your period.  They have an absorbent core that wicks fluid away from your skin and prevents it from leaking.  So you can wear them on their own (in place of a pad, tampon or cup) or use them as a backup method of protection in case your tampon or cup leaks.

Admittedly, I wasn’t interested in using them as a backup.  Since I’ve started using my Lunette Cup I haven’t had a single leak so I don’t bother with such things.  And even when I was using tampons I never worried about throwing on a pad or pantyliner as well.  What I was really fascinated by was the idea that I could forgo the need to even use a cup or pad and just wear a pair of underpants instead.  So I jumped online, ordered a pair of Thinx and then waited patiently for them to arrive.

And it didn’t take long at all!  In barely more than a week I had my Thinx package in my hands. And what a package!  I adore the sweet little designs on the envelope so much that I didn’t want to tear it open. 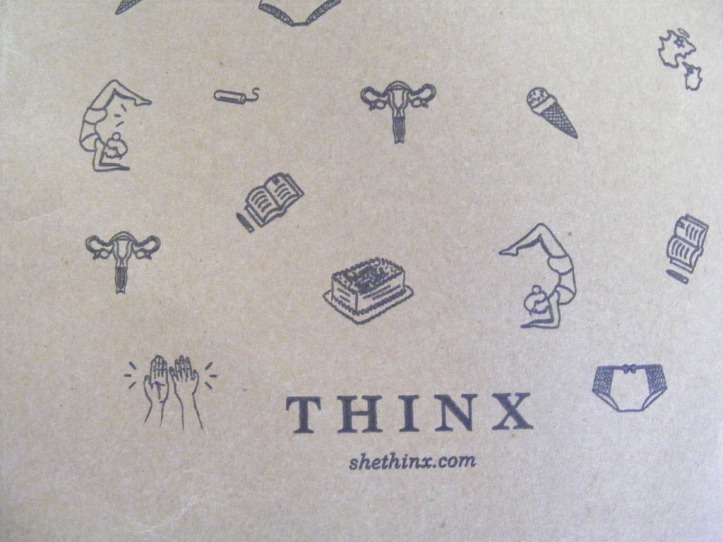 Before I get started talking about the actual product, I want to chat a little about price.  See, a lot of the time alternative period products are initially more expensive than their disposable counterparts.  But over time they work out to be a lot more economical because they can be used over and over.  So I don’t mind paying a bit more for these items.  However, I did find the Thinx to be on the pricey side.  A single pair of the hiphugger style costs $34.  By the time I paid for postage to Australia I was looking at around $50.  Which is about the same amount I paid for my Lunette Cup.  However, while you only need one cup to see you through your menstrual period, you would need a minimum of five pairs of Thinx to get you through a period (assuming you menstruate for five days, and you were using a pad at night, or doing a wash during the week).  That makes the initial outlay very expensive.  Thinx do offer discounts when you buy multiple pairs, which is a bonus.  But I find the price very steep compared with other menstrual products.

Thinx come in a range of styles, including full brief, bikini and thong.  I chose the hiphugger because they were the most absorbent and looked as though they would be comfortable to wear.  The sizes do run a little on the small side, so I recommend choosing a larger size than you would normally buy.  I picked the medium, which were a perfect fit for me, particularly when I encountered a nasty bit of mid-period bloating.

My first impression upon taking the Thinx out of the package was how ordinary they looked!  They are available in black and nude, and I chose the black because it seemed a little cuter to me.  The gusset is reinforced but it isn’t thick or bulky at all.  The material is very stretchy and I found them extremely comfortable to wear.

In fact, on the day I chose to test them out I found them almost too comfortable.  I was a wee bit nervous because I didn’t feel like I was protected.  It felt like walking into battle armed with only a paper sword.  I deliberately decided to wear them on the heaviest day of my period to give them a proper test, and I was very aware of the possibility of a Shining-esque disaster in my trousers.

But I was most pleasantly surprised.  Not only did they feel great, but they actually worked!  I wore them for the entire day at work and didn’t have one hint of a leak.  The Thinx also did a brilliant job of wicking the moisture away, so I felt dry and comfortable for the whole day.  There was none of the odour that you get with disposable pads either.  (I have never noticed that smell with reusable pads, and so I believe it has something to do with the chemicals in commercial pads).

The Thinx hiphuggers are supposed to be able to hold two tampons worth of fluid. I’d say this is pretty accurate, based on how much I usually bleed during my heaviest days.  I should note that I don’t have a super heavy flow.  If you have a heavier flow then you might consider saving the Thinx for your lighter days, or bringing an extra pair to change into if you feel you might leak during the day.

This brings me to the other aspect of the Thinx that I don’t like.  Although they are super discreet to wear, they aren’t so easy to change.  If you did have a heavy flow and wanted to freshen up during the day, you would have to carry around a spare pair of undies and then smuggle the soiled ones into your bag.  When compared with, say, a menstrual cup, this is far from discreet.  That being said, from my experience I don’t think you’d need to change throughout the day, so this problem is a bit of a non-issue.

One thing I will note that, while it didn’t bother me, might be an issue for some.  As any person who menstruates will realise, periods don’t just consist of blood. There is also some *ahem* solid matter that is excreted.  The Thinx don’t absorb this matter, and it just kind of sits on the top.  However, this same thing happens with pads and I found it was easy enough to use a piece of toilet paper to pick up the offending globs and flush them so I felt dry again.

The Thinx underpants are machine washable and came up brilliantly after a wash.  I’m  not sure how well the nude ones would resist stains, but the black ones look good as new.  There was no smell after washing and no residue on my other clothes.

I would definitely recommend the Thinx for women who are fed up with pads and tampons and want something very comfortable and effective to wear during their periods.  If you can get past the price, they are a great alternative to traditional menstrual protection.

Have you tried Thinx?  What did you think?  Would you give these a shot?