On the weekend, Ross bought tickets for the two of us to see The Hobbit: An Unexpected Journey at the Gold Class cinema.  I had expressed some hesitation at the idea of watching a three-hour film at the movies.  Ross thought that a more luxurious setting would make it easier for me to sit still for such a prolonged period, and he was dead right.

We were treated like celebrities.  Upon arrival, we were shown to a swanky lounge and given a menu.  A waitress took our order and asked when we would like each course brought to us.  We chose popcorn and soft drink for the beginning of the film, a roast pumpkin and pine nut pizza for the middle of the film and lemon tart for the final 1/2 hour.  We were seated in gigantic plush armchairs that reclined at the touch of a button.  There was even a private bathroom, complete with fresh flowers.

I had a really wonderful afternoon.  The movie was pretty good too.  I know that a lot of people have raved about it, but I wasn’t so impressed.  I thought it was good, but not great.  It was just so flipping long.  I loved the first two hours, but after that I got a bit bored.  There were several moments where I felt as though the story was wrapping up, only to have the action rev up again.  It wasn’t as bad as Return of the King for false endings (is it just me,  or did that film end about sixteen times?) but it got a bit tedious in the final hour.  I don’t know how I’m going to stay entertained for another two films.

Don’t think for a second that I didn’t enjoy myself though.  The visual effects were incredible, the story was brilliant and the costumes were brilliant.  It was a good movie, I just wasn’t as blown away as many people have been.

Anyway, this is the outfit that I chose to wear for our special day out:

It occurred to me that every time I wear this blouse, I always style it the same way: with a cute skirt, feminine heels and prim jewellery.  I decided to take it in a different direction by pairing it with some slouchy jeans and letting my black bra play peek-a-boo.

I used the sash from the blouse to keep my jeans up.

My makeup was slightly unusual for me because I went for a very trend-based look.  Sepia eyeshadow is going to be the next big thing.  Plus it makes blue eyes pop! 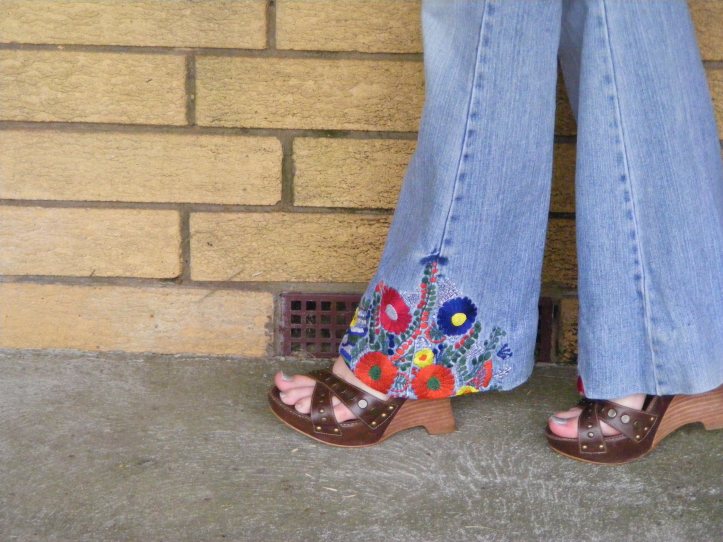 I wrapped the scarf around my bun to add a bit of colour and whimsy to my hair.

Have you seen The Hobbit?  What did you think?