Welcome to my final Consumption post for 2011! Consumption is a monthly feature where I share the products I’ve used up, the books I’ve read and the movies I’ve watched over the past month. 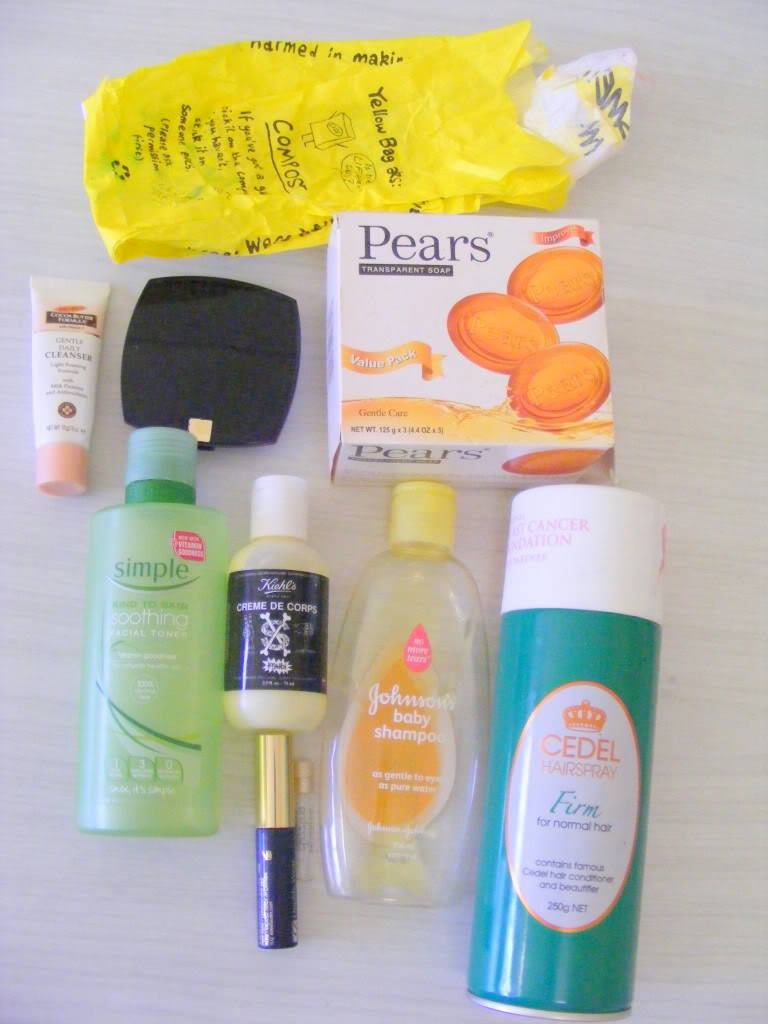 Cedel Firm Hold Hairspray: This is my all-time favourite hair spray. My grandmother uses Cedel hairspray exclusively, and has done since she was a teenager. She has gorgeous hair, so when I started using hairspray myself, naturally this was the one I reached for. It gives a nice firm hold without being sticky or crunchy. It also brushes out very easily.

Dorothy Bubble Bath Bar from Lush: Lush’s bubble bath bars are genius. You simply break off a chunk and crumble it under running water for mountains of delicious-smelling bubbles. I can get about five baths out of one bar, which is excellent value. The Dorothy smells like orange blossom and ylang-ylang, which is very refreshing. It also has a little rainbow on top. Sweet.

Simple Soothing Facial Toner: This toner is very nourishing and easy on your skin. I used it twice a day to clear all the excess dirt and oil off my face and I found it very refreshing.

Pears soap: This is yet another product that I love because of my grandmother. She pretty much only uses Pears soap, and the smell of a fresh bar always reminds me of the times when I was little and I would stay overnight at my grandparent’s house. It has a really fresh scent that’s not overwhelming, and it’s perfect for unisex showers.

Lancome Powder compact: This compact has lasted me well. It’s sturdy and sleek and the powder inside is beyond lovely.

Estee Lauder Double Wear mascara: I was suitably impressed with this mascara. It’s perfect for lengthening your lashes and once it’s on, it doesn’t budge.

Kiehl’s Crème De Corps: you might remember that I reviewed this luxe body crème a while back. I finished up the bottle this month, and I’m already missing it’s creamy scent and soft texture.

Estee Lauder Dazzling Gold perfume: This perfume is sharp and strong. I found it perfect for wearing with glamorous, diva-inspired outfits.

Johnson’s Baby Shampoo: Simple, cheap and gentle on your hair. Perfect if you want to get your hair really clean without stripping it of all it’s moisture.

Palmer’s Cleanser: This cleanser worked pretty well, but overall I wasn’t impressed by it. It left a lot of residue on my skin and my face didn’t really feel clean after I’d used it. I wouldn’t repurchase this. 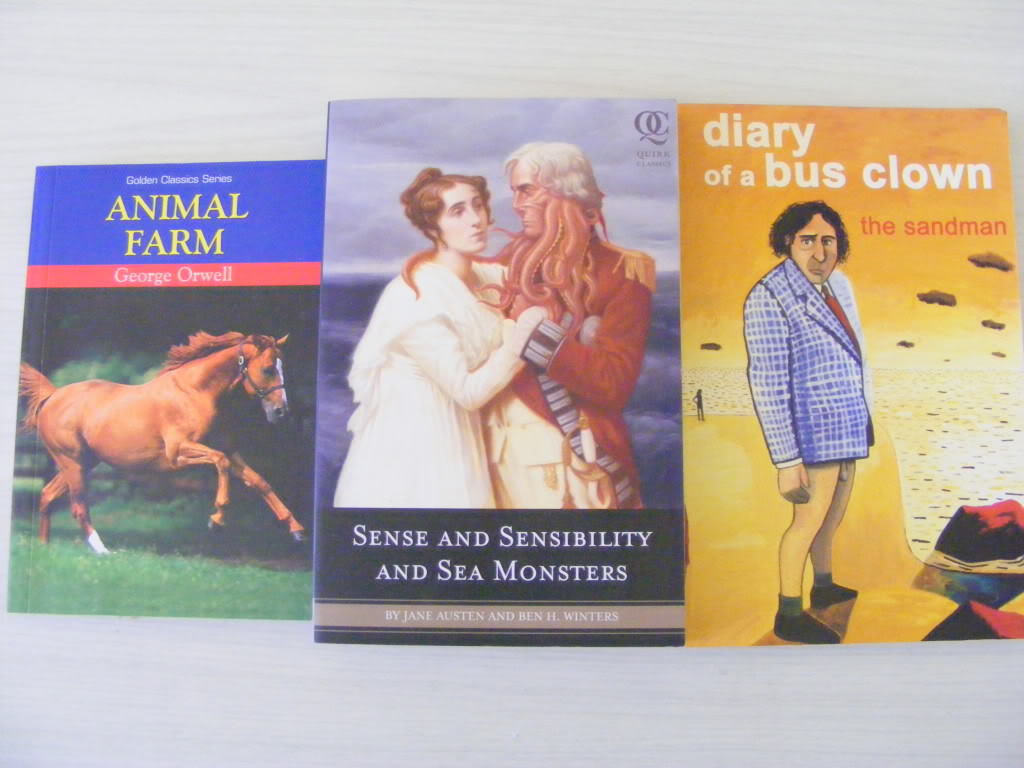 Animal Farm by George Orwell: I think practically everyone I know studied this book in high school. Not me though. Until this month, I’d never read it. I ploughed through the entire thing on a train trip home, and I have to admit that I loved it. I didn’t expect to enjoy this story, because I’m not really into political tales, but this one was a brilliant allegory. I actually found myself close to tears at a couple of points.

Sense and Sensibility and Sea Monsters by Jane Austen and Ben H. Winters: This books was totally hilarious. I think I actually enjoyed it a lot more than Pride and Prejudice and Zombies, because I haven’t ever read Sense and Sensibility. That means that it wasn’t so easy for me to distinguish where Austen left off and Winters began (although I’m guessing that all the parts with sea creatures were not in the original text). This book was a really entertaining read.

Diary of a Bus Clown by The Sandman: Sandy is a bus clown, known by the members of his football club for his ability to make them laugh with his mid-trip jokes and gimmicks. His diary tells the tale of a particularly memorable football trip.

Bridesmaids: I watched this with my mother and Ross, and it had me howling with laughter. Other than one scene that was so gross I had to leave the room, I loved every minute of it. The cast was incredible and I really felt for the protagonist. I was especially excited to see that the leading man was played by Chris O’Dowd, who I love in The I.T Crowd.

Juno: A film favourite of mine. Juno is sixteen and finds herself pregnant to the boy she has a crush on. She decides to put the baby up for adoption. It’s a cute movie with a fantastic soundtrack. My one bone to pick with it is that I think the characters are pretty unrealistic. Juno is way more emotionally stable than any teen I’ve ever met, and her parents are just too cool for school. There is no freakin’ way that a real family would react like this if faced with the same situation.

Carrie: I watched this only a few months ago, but Ross hadn’t seen it, so it was the perfect way to pass a rainy Sunday afternoon. Chilling and unsettling.

Despicable Me: This is possibly the cutest film I’ve seen all year. Gru, an evil genius, adopts three girls to use in a dastardly plan he’s hatched to steal the moon. However, the more time he spends with the girls, the more he realises how much they actually mean to him.

Memento: A great intellectual thriller. Memento is a story told backwards, by a man with short-term memory loss. You’ll be hooked as you try to piece together the story, and shocked when you reach the end of the film.

Elizabeth: This was the film that started my obsession with the Tudor dynasty. It’s a (not entirely historically accurate) depiction of the life of the young Queen Elizabeth I as she struggles to maintain order in her new kingdom.

The Virgin Suicides: I adore the costumes in this film. It’s 70’s summer luxe at it’s finest. In the film, four childhood friends reminisce about the five sisters who stole their hearts, and their obsession with finding out why all five girls killed themselves.

Harry Potter and the Deathly Hallows part 2: This film was even better the second time around. I won’t give anything away, but we’ll just say that I cried a lot more freely watching this at home than I did at the cinema.

Harry Potter and the Goblet of Fire: Sam and I popped this one while we were crafting a few nights ago. It’s my favourite of the Potter movies.

Alvin and the Chipmunks: Good, clean family fun, starring Jason Lee as Dave Seville. I always get a giggle out of this film.