This month, I have a pretty paltry selection of books, films and products for you to browse. I’d had grand plans to read and watch loads of Halloween-related texts over the course of this month. Sadly, my final university assignment got in the way of these plans. Most evenings, I didn’t have time to watch an entire film, and rather than reading until I fell asleep I would fall into bed, exhausted, each night. I did watch a lot of TV shows though. I worked my way through season 4 of The Big Bang Theory, watched some Freaks and Geeks and started re-watching Buffy the Vampire Slayer. I also didn’t go through too many products this month. Here’s October’s edition of Consumption:

Products I used up. 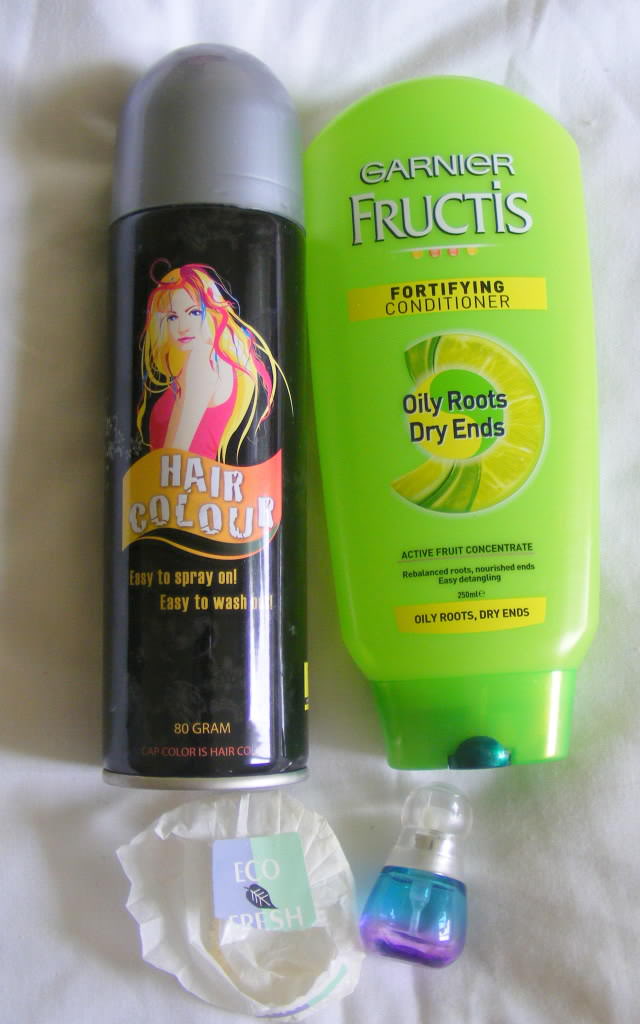 Spray-on hair colour from the Reject Shop in grey: I bought this to use as part of my weeping angel costume. The colour was exactly what I was looking for, but sadly the bottle ran out before I’d even sprayed half of my head. I really wish that I’d bought a back up can. The colour was pretty strong and it was easy to wash out.

Eco Fresh soap: I got this from a random hotel room on one of my travels, and it was a pretty nice bar of soap. I don’t like to throw away hotel soap because it seems like a waste to me. I actually use all of my hotel soaps. I have quite a collection of them, because my mother always gives me her soaps and shampoos whenever she stays in a hotel.

Garnier Fructus fortifying conditioner: I was really thrilled with this conditioner. It did a magnificent job of hydrating my hair, without making it oily and horrid.

Estee Lauder Beyond Paradise perfume: This perfume is like summer in a bottle. It’s a fresh, fruity scent that makes me feel gleeful from the moment I squirt it on myself. I also adore the turquoise and purple bottle, which looks gorgeous on my dresser.

Sleepy Hollow: What better way to get into the Halloween spirit than by watching Chrisopher Walken terrorise Johnny Depp? This movie gives me goosebumps every time I watch it.

Scream:  Scream is fast becoming one of my favourite horror films. I’ve got a pretty major crush on Randy Meeks, which is enhanced every time I see the scene in the video store. I also spend the bulk of the movie screaming at Sidney for being such a bonehead.

Scream 2.:Ross and I had a bit of a Scream marathon this month. Scream 2 isn’t as good as the original, but it still has some pretty scary moments. The scene in the sorority house always bothers me, because it’s so weird to watch Sarah Michelle Gellar getting chased by a madman and not being able to fight back competently.

Scream 4.: As you can see, we skipped Scream 3. It’s a pretty weak film, and the only thing I really like about it is the brief appearance of Jay and Silent Bob. Scream 4 on the other hand was actually not too bad. It was far gorier than the previous instalments, which didn’t appeal to me. I tend to prefer films that are scary rather than gory. IT made a big deal about being part of the ‘new generation’ of horror films, which tend to be more gory and psychological. It depressed me slightly, because I felt like a bit of a nana for feeling squeamish about watching somebody get disembowelled. I was also very distracted by Courtney Cox’s new lips.

Tank Girl: I love this movie. I know that it’s a bad comic book movie from the 90’s, but I can’t help but laugh my head off every time I watch it. I think that Tank Girl and I are kindred spirits, with our love of ripped clothes, silly jokes and slightly off-kilter friends. The costumes are to-die-for as well.

Edward Scissorhands: I think this might be my favourite Tim Burton film. It’s just so touching and sweet, but creepy as well. I always cry when I see Vincent Price as the inventor, because he reminds me of my old next door neighbour, who died a couple of years ago. Conversely, I can’t help but laugh my head off when Edward accidentally punctures the water bed, and then tries to cover up his mistake with a stuffed elephant.

Beetlejuice:Is there anyone sleazier than Beetlejuice? I don’t think so. He’s rude, crude and hell-bent on terrorizing those around him. Someone needs to send the little fucker back to the underworld. 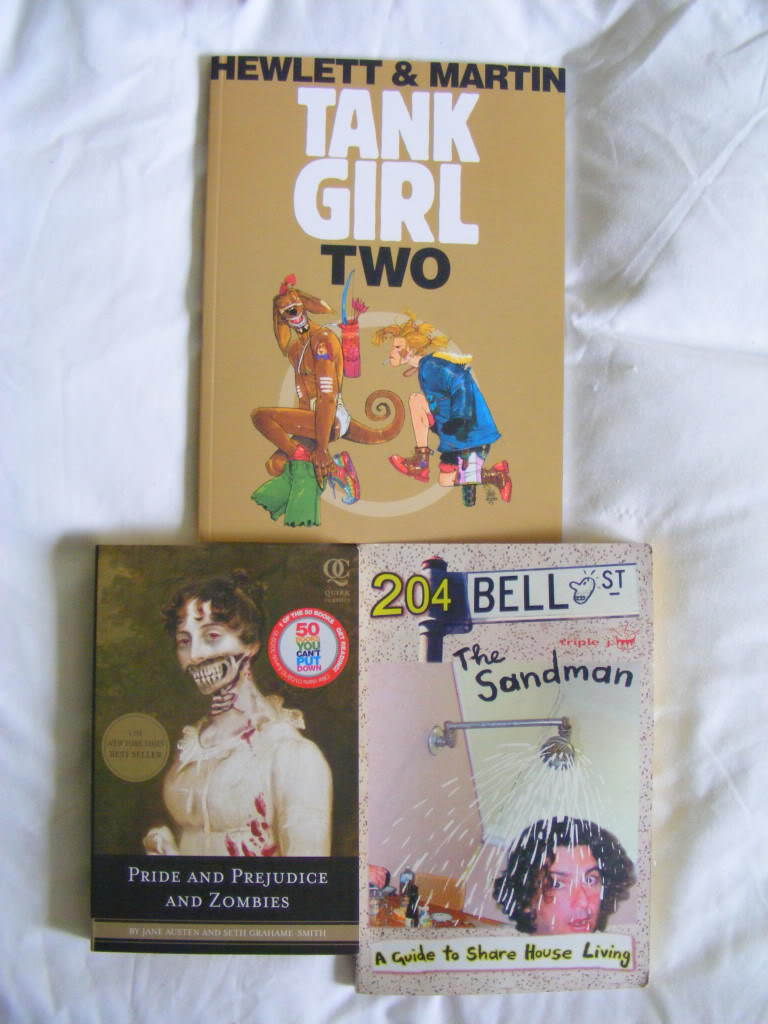 Pride and Prejudice and Zombies by Jane Austen and Seth Graham Smith: I have never been a fan of Jane Austen. Two of my good friends cite Pride and Prejudice as their favourite book, and I’ve read it not once but twice, in an attempt to see what they’re so excited about. I just don’t get it. Mr Darcy seems like a douchebag to me. However, give him a blunderbuss and have him fight off a hoard of zombies, and he instantly looks like a stud. This book is hilarious, and I highly recommend it to those who aren’t fans of Austen, or who love a good supernatural comedy. Fans of Shaun of the Dead with go nuts for this book. A word of warning- if you have a weak stomach, you might want to steer clear of this novel, as there are some pretty graphic scenes.

204 Bell Street- The Sandman’s Guide To Share House Living: I’ve read this about thirty times, and each time it just gets funnier. Having lived at college and then share houses for the past six years, so much of this story rings true to me. It’s a great read for share-house survivors or students who are preparing to enter the world of communal living. There is actually a few tidbits of excellent advice in amoung the hilarity.

Tank Girl 2.:Ross has now bought me four Tank Girl compilations, and this is the second instalment. It’s the first Tank Girl comic I’ve read that’s in colour, which is awesome.