At the close of each month, I give you guys a peek into what I’ve been reading, watching and wearing for the past month. September’s Consumption post is rather book-heavy. I bought a bunch of books this month, and I’ve been ploughing through them at an alarming rate. I also used up quite a few products this month, so there’s lot’s to show you guys.

Over The Hedge: This is one of my favourite ‘sad day’ movies. It’s cute and funny, with some ironic plot twists. I particularly love R.J the Racoon’s monologue about humans and their obsession with food. This movie has a great voice cast, and is guaranteed to provide you with plenty of laughs.

Ponyo: I enjoyed this film, even though it was weird as fuck. Basically, a little boy catches a goldfish, which falls in love with him and turns into a little girl called Ponyo. Ponyo and her new friend have many adventures, which are hampered by her father, an evil magician who is married to the sea. Get it? No? Me either, but it was a pretty cute film nonetheless.

Halfbaked: This is the ultimate stoner film. It stars Dave Chappelle and has guest appearances from Bob Sagat, Snoop Dogg, Willie Nelson and Janine Garofalo. It also has the best closing line of any film I’ve seen.

Clueless: Despite being rather cheesy and pretty dated, Clueless remains one of my favourite films of all time. It’s colourful and fun, with a great soundtrack. Watching it now does make me a little bit sad for Brittney Murphy though.

The Wizard of Oz: I had an Oz-themed costume party earlier in the month, and my guests all crowded around the telly to watch this classic film.

The Harvey Girls: another classic film starring Judy Garland, Ray Bolger and a gorgeously young Angela Lansbury. It’s a fun, fast-paced musical tribute to The Harvey Girls, young women who worked as hostesses at the Harvey House diners across America in the 1930’s. It’s worth watching just to see Ray Bolger dance. That man is an utter genius when it comes to dancing. You might remember him from his performance as the Scarecrow in The Wizard of Oz.

The Village: An excellent thriller with a twisty-turny ending. Even if you’ve seen it before, it’s worth watching again, because I find that each time I watch it, I notice something new. 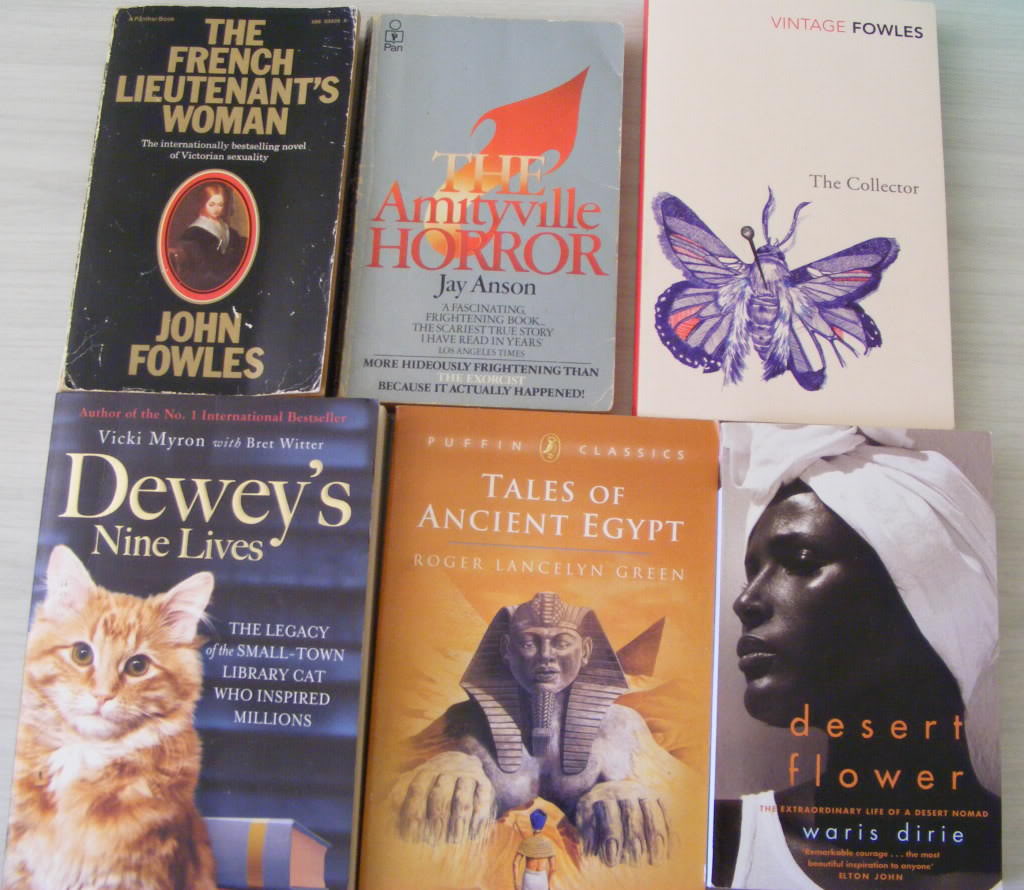 The Amityville Horror by Jay Anson: This is honestly one of the most frightening books that I’ve ever read. It is based on the frightening true story of the Lutz family, who moved into a real-life haunted house. Seriously eerie.

The French Lieutenant’s woman by John Fowles: I enjoyed this book a lot more than I expected to. It was fascinating, with deep characters and real emotion. I thought that the tale was going to be rather predictable, but I was pleasantly surprised.

The Collector by John Fowles: I studied this as a text for my literature class in year nine. It remains one of the creepiest books I’ve ever read. I searched for a copy of this book for years, until I finally found one in the university book store a few weeks ago. The book tells the story of Frederick Clegg, a bookkeeper who becomes so besotted with a beautiful young girl that he decides to kidnap her. Chilling.

Dewey’s Nine Lives by Vicki Myron with Bret Witter: I was utterly disappointed with this book. To be honest with you, I didn’t even finish it. It’s predecessor, Dewey, was a captivating and moving read. The follow-up was unnecessary and trite, and had nothing to do with the original story at all. It really does seem as though the author slapped Dewey the cat’s picture on the front of the book to secure more book sales. It’s basically a collection of tales about real-life remarkable cats, which gets boring and depressing after the fourth chapter. If you read and enjoyed Dewey, I wouldn’t recommend this book.

Desert Flower by Waris Dirie: This book literally altered my world view. I found it amazingly moving. It is the autobiography of model and U.N ambassador Waris Dirie. Waris lived in Somalia as a nomad until she ran away at the age of thirteen. She fled to avoid an arranged marriage. In addition to her hard life in Somalia, Waris had to face the pain and shame of being a victim of female circumcision. Until I read this book, I had no idea of the true nature of this procedure or the reasons behind it. I didn’t realise the pain and torment it causes the women who have been circumcised. Although it is incredibly confronting, I think that every woman should read this book. I can’t recommend it highly enough.

Tales of Ancient Egypt by Roger Lancelyn Green: This collection of Egyptian mythology was both interesting and entertaining. 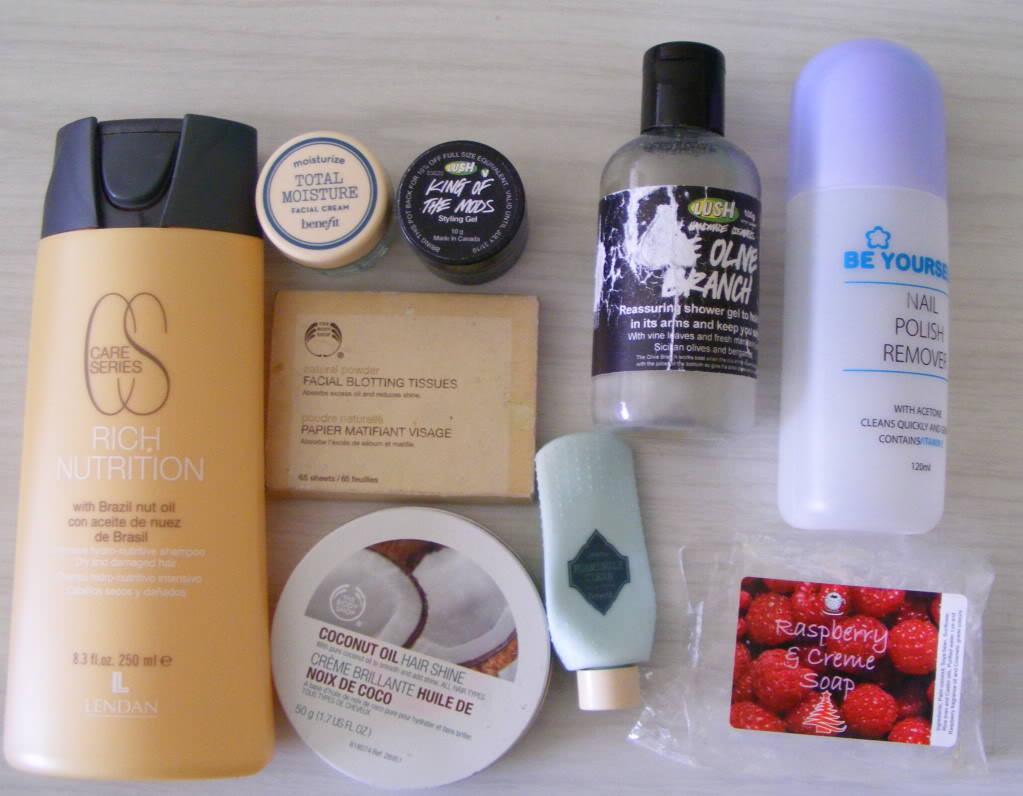 Benefit Foamingly Clean facial wash: I adore this cleanser. It’s strong enough to blast through dirt and makeup, but gentle enough to use on sensitive skin. It leaves my face feeling fresh and thoroughly clean.

The Body Shop Coconut Oil Hair Shine: I use a tiny dab of this to smooth flyaways, give hair brilliant shine, moisturize dry ends and muss my hair up for sexy beach hairdos. It’s great value and smells divine.

Be Yourself nail polish remover: Cheap, cheerful and does the job.

The Olive Branch shower gel from Lush: This product has the most gorgeous scent ever. It’s fresh and classic, and is suitable for ladies or gentlemen. It gets you clean in a flash and leaves you smelling lovely.

Lendan Rich Nutrition shampoo: This shampoo was pretty great for getting my hair clean, nixing oil and moisturizing my ends.

Raspberry and Crème soap: Sam bought this back from Tasmania for me, which was a lovely treat. The soy-based soap leaves your skin soft and gently cleansed, and smells suspiciously like dessert.

The Body Shop Facial Blotting Tissues: I like to keep a pack of these handy to mop up sweat and excess oil. They’ll mattify your face quickly, without destroying your carefully applied makeup.

Benefit Total Moisture facial cream: the perfect solution to my dry winter skin. I slapped this on every night before bed, and woke up with silky, hydrated skin. I’m certainly going to be replacing this jar.

King of the Mods hair gel from Lush: This soft-hold gel has a delicious, citrus smell, locks hair in place and has a name lifted right out of The Mighty Boosh. Therefore, I adore it.

What have you been watching, reading and using this month, lovely?