Here’s a look at what I’ve been reading, watching and using in August.

I haven’t really watched too many films this month. I’ve been really busy with work, uni and blogging, so I haven’t had much time for watching. Mostly, I’ve been checking out television series, because I like being able to watch a few short episodes over the course of the evening. This month, my favorite series have been 3rd Rock from the Sun, That 70’s Show, The Mighty Boosh, Metalocalypse and Penn & Teller’s Bullshit. The few movies I have watched are as follows:

– Whip It: This kick-arse movie about roller derby makes me want to pull on a pair of skates, think up a dirty name and start hip-checking people in the street. Ellen Page is ridiculously cute.

– Yes Man: Carl is in a rut. He’s stuck in a world of ‘no’, turning down opportunities left, right and centre. After a run-in with a self-help guru, Carl decides to begin saying ‘yes’ to everything, from sexual adventures with old women to Harry Potter costume parties. His life starts to take a turn for the better once he begins to embrace all that life has to offer. This is a really uplifting film that will make you want to seize the day.

– Sex and the City: after Sam and I finished watching the series, I felt the need to watch the follow-up film. I’ve never been a huge fan of the film, but it was a nice way to spend an evening when I was totally zonked and incapable of focusing on any film with a plot.

– Dodgeball: This film is totally hilarious. The highlight for me is seeing Alan Tudyk play a pirate. Also, I didn’t realize that Jason Bateman was in this film until a few weeks ago. That was a pleasant surprise.

– Forgetting Sarah Marshall: I have a real soft spot for Jason Segal. As far as I’m concerned, he can do no wrong. He’s tragically hilarious in this film, playing Pete, a hopeless romantic who has just been dumped by his girlfriend of five years. In an effort to get over her, he travels to Hawaii, only to find himself staying in the same resort as his evil ex. Russell Brand is also in this film, which is a huge plus for me (I know he’s dirty, but I just can’t help loving him. He’s like a sleazy Vince Noir).

– Charlie and the Chocolate Factory: The Tim Burton version of this film always leaves me in a good mood. I was a huge fan of Roald Dahl as a child, and this film really captures Dahl’s sense of humor and style. I especially love the Oompa-loompa’s songs, which take on a different musical style for each ill-fated child. 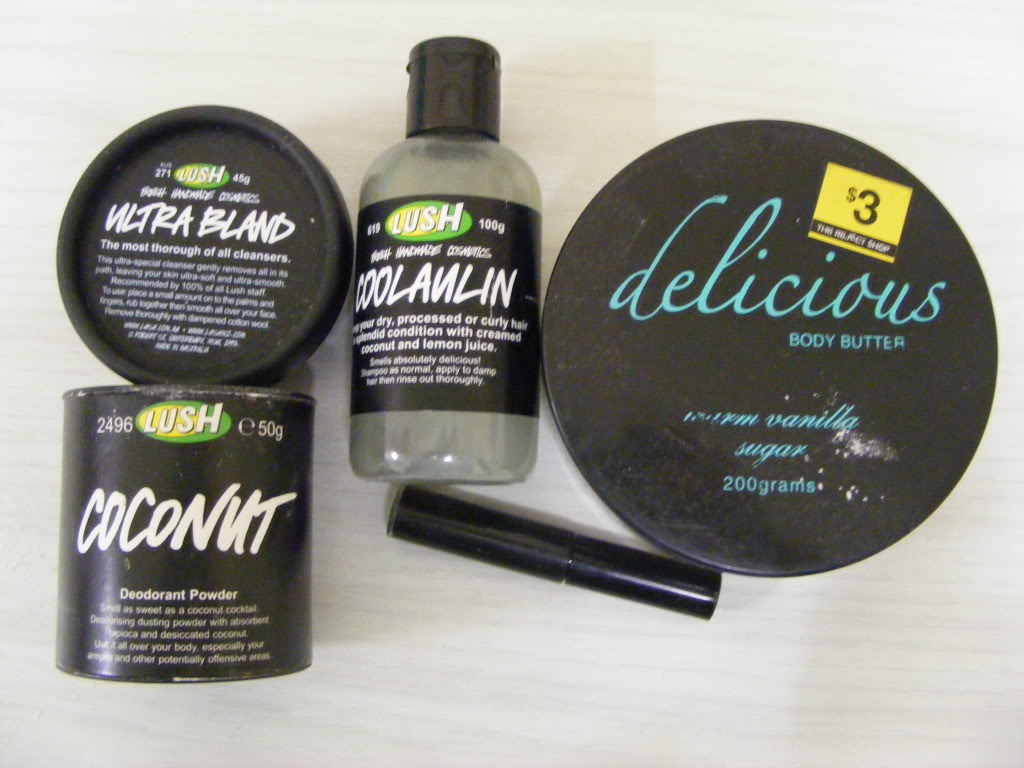 – Coconut deodorant powder from Lush: I bought this last year on a whim, and was pleasantly surprised. I don’t normally like powder-style deodorants, but this one was really lovely. The scent was sweet and coconutty, without being overpowering. It did a pretty good job of keeping me dry and neutralizing odors. The only thing that I didn’t really like about it was that it was rather messy to apply.

– M.A.C Liquidlast eyeliner: This eyeliner was a big disappointment for me. Although it went on easily, and gave a sleek, smooth line, it was impossible to remove. I’d spend ages scrubbing at my eyelids with eye-makeup remover, and this stuff wouldn’t budge. I had to wait for it to flake off my eyelids, which was a disaster. I haven’t actually used this up, but I’ve found a much better liner to replace it with, so this tube is going in the bin.

– Ultra Bland cleanser from Lush: I adored this honey-scented cleanser. It was a bit tricky to use but once I got the hang of it, I was so happy with the results. This little baby god rid of all my makeup, plus oil and dirt in one fell swoop. It left my skin feeling silky and lovely and it smelled good enough to eat. I’ll be repurchasing this for sure.

– Delicious warm vanilla sugar body butter: I bought this at the Reject Shop, because I fell in love with the sweet, candy-like scent. For just $1, this product was very moisturizing, and left my skin feeling gorgeous. My only beef with it was that it was a little greasy, but you get that with body butters.

– Coolaulin conditioner from Lush: August was a month for coconut-scented products. This hair conditioner left my locks smelling like a tropical island. It wasn’t quite as moisturizing as I would have liked, but it did a pretty good job of keeping my hair smooth and gorgeous. 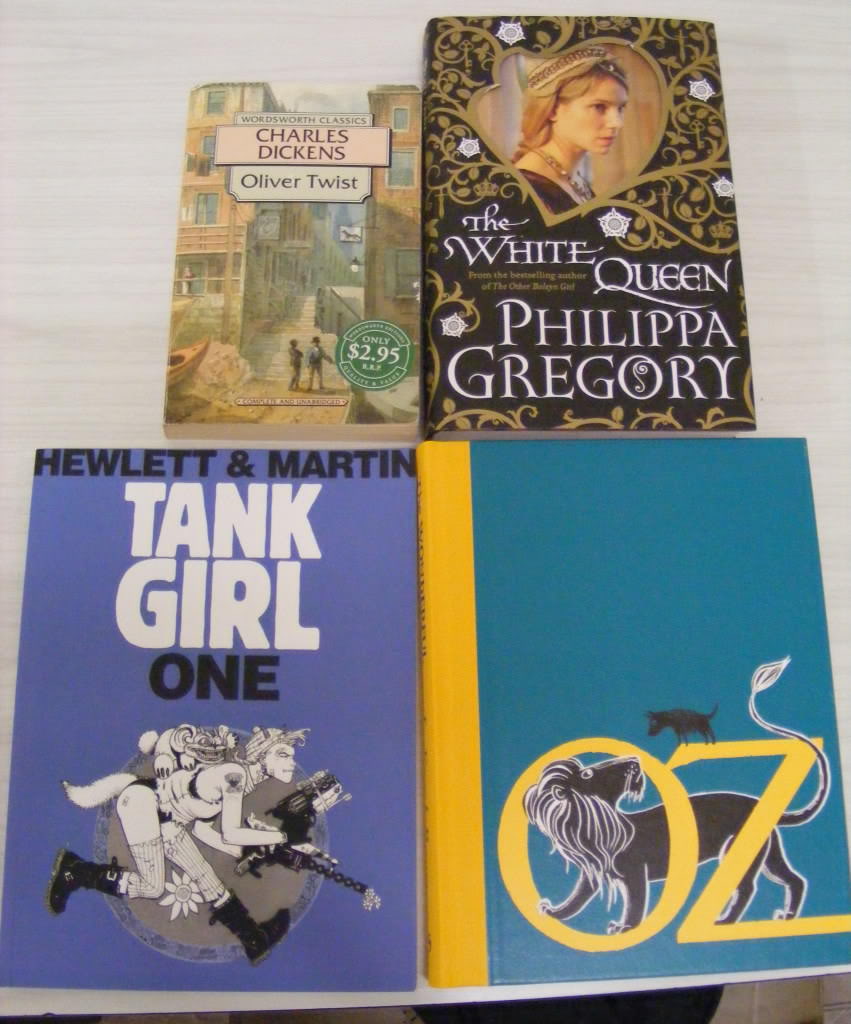 – The Wizard of Oz by L. Frank Baum: I was gifted this stunning hardback copy of The Wizard of Oz as a late birthday gift from my friend Kath and her partner Evan. I was so touched when she handed it to me. The Wizard of Oz is one of my favorite stories of all time, and yet I’ve never actually owned a copy. I’ve read it cover to cover, and enjoyed every page. I was particularly enchanted by the illustrations.

– The White Queen by Phillipa Gregory: This book is the sister book to The Red Queen, which I read back in June. The White Queen is about Elizabeth York who was Henry VIII’s grandmother. It was a fascinating tale of love, betrayal and war. Although much of it is fabricated, it has piqued my interest for this generation of English royals, and I’m now keen to learn more.

– Oliver Twist by Charles Dickens: I can’t believe I’ve not read this book before now, particularly as I’ve owned this particular copy since I was ten years old. I enjoyed the tale of Oliver, although I thought that the ending was a bit predictable. I am very well acquainted with the story of Great Expectations, and the themes in that story are similar to those in Oliver, which spoiled the ending for me a bit.

– Tank Girl: One by Jamie Hewlett and Alan Martin: Tank Girl is my favorite comic book character. The night I met Ross, we spent ages talking about Tank Girl, and the fact that he knew who she was cemented my hunch that he was a truly awesome guy. You can imagine my excitement when Ross presented me with this graphic novel last month, as a ‘just because’ gift. It’s rude, crude and hilarious, and I love it. What’s not to love about a filthy-mouthed woman who rides a tank, dates a kangaroo and doesn’t like wearing pants? I love the artwork as well, which is done by Jamie Hewlett, who you might remember as the artist who created the film clips and album covers for Gorillaz.