Here’s a run down of the products I used, the movies I watched and the books I read during the lovely month of May 2011.

– Closer: This film started off promisingly, but petered off into something intensely depressing after about forty minutes.

– Precious: This was one of the most moving films I’ve seen in a long time. It wasn’t a happy film, but it was truly great. I highly recommend it.

– Paper Heart: a mockumentary about a jaded young girl’s quest for love. I hated this film, mostly because I can’t stand the comedienne Charlyne Yi, who plays the main character. It was pretty dull and didn’t really engage me.

– Clerks 2: I adore this film, but my housemate had never seen it, so she and I watched it together. I laugh myself silly every time I watch it, particularly at the scenes that feature Jay and Silent Bob.

– The Addams Family: the perfect movie to watch when you’re having a terrible day. Raul Julia is smoulderingly lovely as Gomez and Anjelica Houston is the best Morticia I’ve ever seen. Christina Ricci and Christopher Lloyd also star.

– Addams Family Values: I went on an Addams Family bender this month, and I don’t regret it. The sequel isn’t quite as good as the original, but it’s still pretty damn kooky.

– Slumdog Millionaire: Although I enjoyed this film, I just don’t see what all the hype was about. It was good, but did it really deserve all of those Oscars? Really? Did the judges not see the poop-diving scene?

– Holy Smoke: The first hour of this film was really interesting. Ruth, a young girl from rural Australia travels to India and becomes involved in a cult. Her family bring her home, and then hire a ‘Cult Exit Strategist” to help her ease back into everyday life. After an hour, the film went to shit. Kate Winslet was just lovely though.

– Harry Potter and the Deathly Hallows Part 1: I’ve watched this three times already, and each time I cry at the end. I can’t wait for the final instalment of this epic saga.

– Charlies Angels: I love everything about this film: the costumes, the crappy jokes, the unbelievable action scenes. It’s pure escapism at its best.

– Charlie’s Angels: Full Throttle: Not as good as the original, but good, clean, arse-kicking fun.

– Pirates of the Caribbean 4: Dad and I went to see this for his birthday. I expected an utter flop, but I was surprised to see that the Pirates films seem to have made a return to form. This instalment was adventure-filled and action-packed. The special effects were awesome and the cast was pretty darn good too. There’s a cameo by Dame Judy Dench that nearly made me squeal in the cinema, and Captain Jack Sparrow is as mischievous as ever.

– The Reader: The Reader was not at all what I expected. It was very dark, but I enjoyed it immensely. It’s worth seeing if only for the amazing special effects makeup.

– Space Jam: I found a copy of this childhood favourite on the weekend, and I was so pleased that it actually holds up over time. The animation isn’t as impressive as it once was, but the film is suitably fun and cheesy.

– Flashdance: I expected to love this film, because I adore performance-based movies. However, I found it dull and contrived. There were a lot more boobs in it than I anticipated though. 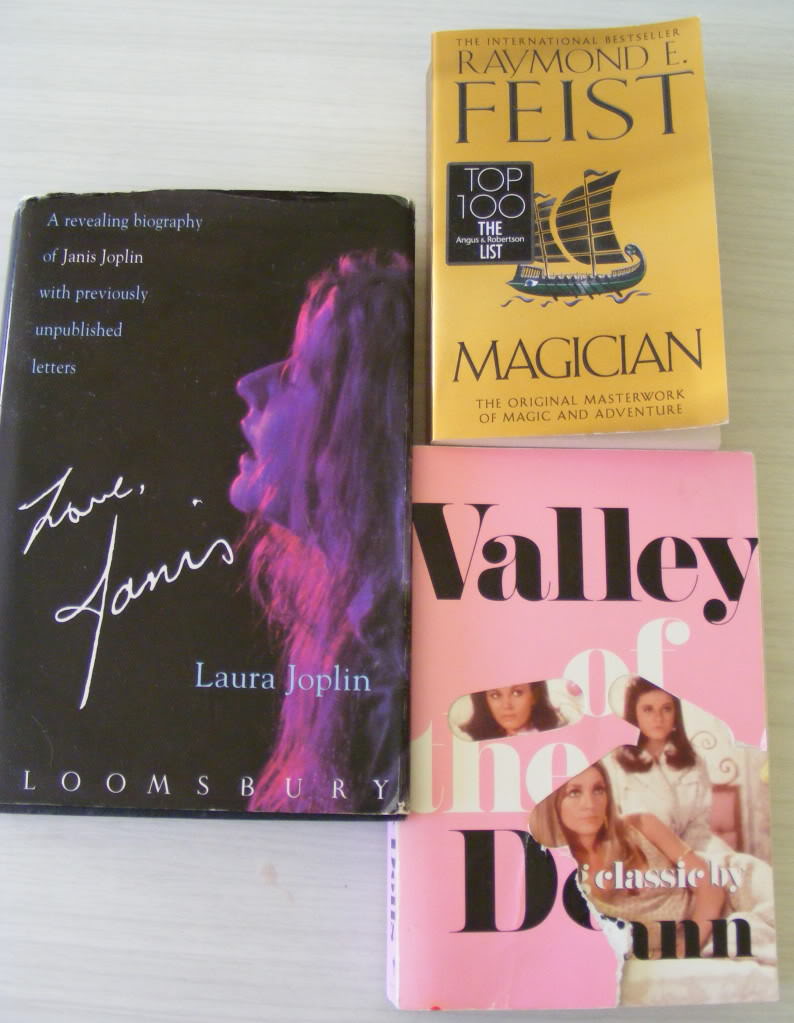 – Dr Horrible, and Other Horrible Tales: this was a comic book loaned to me by my housemate, based on the web-series “Dr Horrible’s Sing-Along Blog”. It was really funny, with great illustrations.

– Love, Janis by Laura Joplin: I bought this months ago and I’ve only just gotten around to reading it. I think this was one of the best Janis Joplin biographies I’ve read. It was written by Janis’ younger sister, Laura, who gives a unique perspective on the woman behind the superstar. She includes personal letters from Janis and recounts events from their shared childhood, which was really heartwarming. I didn’t want to put this book down.

– The Valley of the Dolls by Jaqueline Susann: I’ve read this book four times now, and I know I’ll probably read it at least four more times in the future. It’s a classic trashy tome about the lifestyles of three rich and famous women in New York City in the 1940’s, 50’s and 60’s. The book follows their ascent to fame, and subsequent fall from grace as each girl embraces a life of sex, drugs and lies.

– The Magician by Raymond Feist: To be perfectly honest, I didn’t actually finish this book. I got 300 pages into it, and I just wasn’t engaged or interested in reading any more. I figure that if you read 300 pages of a book and after all that you still aren’t feeling it, it’s time to give up. The book is an epic fantasy story about Pug, a magicians apprentice, who falls in love with a princess, battles trolls and fights in a war. I can’t really say any more because that’s as far as I got. 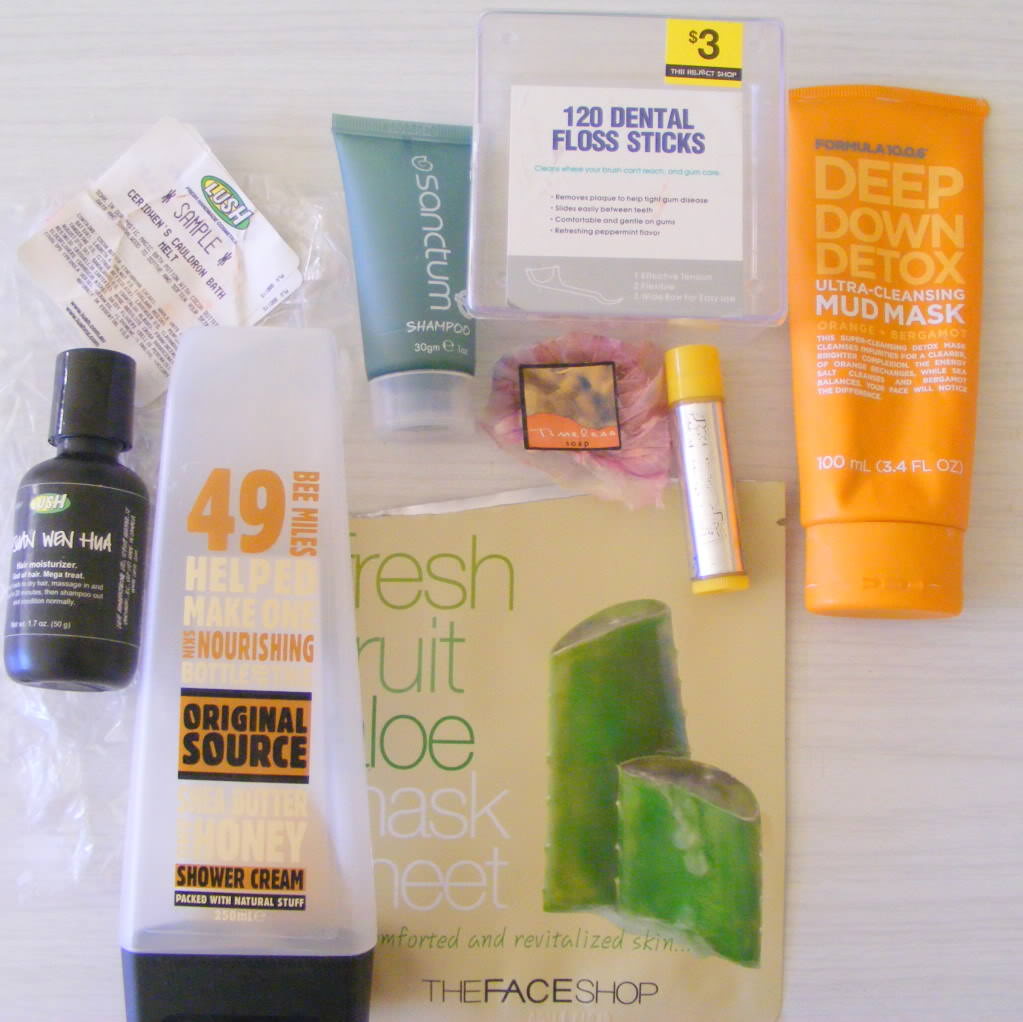 – Hsu Wen Hua hair moisturizer from Lush: I quite like this hair treatment, as it leaves my hair gorgeously soft. I’m not a big fan of the smell though. It’s got a fresh, spicy smell which is delicious, but after a while it starts to give me a headache. I’m willing to put up with the scent though to reap the benefits of this lovely treatment.

– Original Source shea butter and honey shower cream: This shower cream was lovely. It left my skin feeling smooth and moisturized and the bottle lasted for well over a month. I wasn’t completely wrapped in the scent though. I thought it would have a more true honey scent, but there was also a hint of something else in there too. It smelled OK, but not as nice as some other honey-based products that I’ve tried.

– Ceridwen’s Cauldron bath melt from Lush: These babies are perfect for dry, aggravated skin and cranky spirits. Just throw it into a hot bath and let the cocoa butter and oats do their work.

– Timeless soap: a little bar of hotel soap. I like to actually use my hotel soaps, rather than just let them languish in my bathroom drawers.

– Fresh Fruit Aloe Face Mask Sheet from The Face Shop: I was very impressed with this face mask, which hydrated my skin and left it feeling softer than a baby’s you-know-what. I’ll be reviewing this later on, so stay tuned.

– Sanctum Shampoo: This is another hotel product, so I was surprised at the quality of this shampoo. It had a gorgeous ginger and lemongrass scent and made my hair shinier than a beacon.

– Deep Down Detox mud mask from Formula 10-0-6: This is perfect for giving your skin an industrial-strength clean.

– Dental Floss sticks: I bought these a while back, and I’m glad I finally used them up because they were utter rubbish. The floss would snap as soon as you’d flossed one tooth and the picks were pointy and ineffective. I’m happy to go back to regular floss after trying these.

So that’s all the stuff I consumed in the month of May. Did you try any brilliant products, watch any interesting films or read any wonderful books in May