There are few things I love more than a good belly-laugh. I was made to laugh, giggle, guffaw and chortle. It should come as no surprise, therefore, that the Melbourne International Comedy Festival is one of my favourite events of the year. This year, I knew that I was only going to be able to afford to see a couple of performers, but there was one show I wouldn’t let go by without me seeing.

Exit The Sandman is a farewell tribute to the beloved Australian comedy personality The Sandman. For those of you who don’t know, The Sandman started out as a short segment on the Triple J breakfast show in the early 90’s. By the mid-90’s, he had a weekly segment on Good News Week, alongside his pun-loving partner, Flacco. The Sandman has also appeared in a number of comedy specials, including one GNW special where he walked on stage nude, and then proceeded to amble outside to his car to retrieve his costume, while the cameras followed him. He has acted as moderator to at least one Comedy Festival Great Debate, and even had his own program on SBS, entitled Sandman in Siberia. In addition to these appearances, The Sandman has penned six books: Sandman’s Advice to the Unpopular, This is My Surfboard, Pleasant Avenue, 204 Bell Street (Sandman’s guide to share house living), Diary of a Bus Clown and Sandman in Siberia. He is best known for his droll, monotone voice and his catchphrase, “I choose to start my story…now”.

I have been a fan of The Sandman since my teen years. I used to watch Good New Week just to see his segments with Flacco. When I was 13, my mother bought me a copy of Sandman’s Advice to the Unpopular for Christmas, and it became a yearly tradition to add a new Sandman book to my collection. He taught me many important lessons. I learned that trying to be remarkable is painful, whereas trying to be remembered is simply humiliating, and that failure requires no preparation. You can imagine my dismay when I found out that The Sandman is retiring.

After so many years as The Sandman, his creator, Steven Abbot , has decided it’s time to put Sandy to rest once and for all. This show, Exit The Sandman, will be the last appearance Steven does as the Sandman. When I discovered that this would be my last chance to see The Sandman live, I leaped into action and booked tickets. Last night, my brother and I ventured out to the Melbourne Town Hall to say farewell to Sandman.

We arrived quite early, and had prepared to wait for quite some time so that we would get excellent seats. After only a few minutes of waiting, the doors opened and The Sandman himself walked out into the hallway and greeted the crowd waiting outside. He was looking rather festive in a hot-pink suit and lavender shirt. He was friendly and warm, talking to everyone in the line. He ushered us inside and helped us to find our seats. The show was off to a good start.

The actual show was beyond excellent. The room we were seated in was rather small, and seated only around 60 people, so the show was quite intimate. The Sandman interacted with the audience and involved audience members in many of his jokes. Over the course of the show, he performed some of Sandman’s classic sketches, sang several songs and dazzled us with his array of “attention seeking devices”. I was in fits of laughing through the entire show. He ended the performance by reading a eulogy about Sandman, to help all the fans in the room to deal with the passing of this beloved character.

My brother and I hung around after the show, and managed to get a couple of autographs from The Sandman. He chatted with us for a little while and was even so kind as to pose for a few photographs. It was a real honour to meet him, and he was a really lovely guy in person. 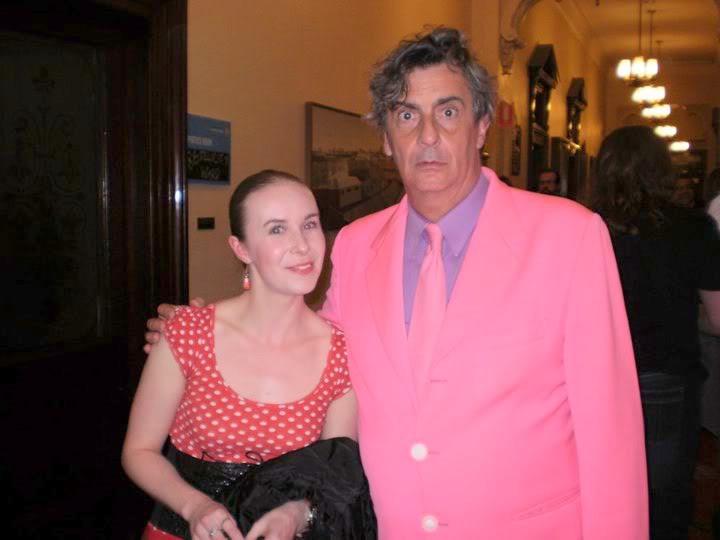 If you are in Melbourne and have the chance, book yourself a ticket to see Exit Sandman. The ticket prices are very reasonable and I guarantee you will have an awesome time. The show will appeal to Sandman fans and comedy lovers, particularly those who like physical humour. Be sure to book your tickets ahead of time, and don’t expect to be able to get tickets at the door. Each show is quite small and it has been sold out pretty consistently, so you need to plan ahead. There are only four shows left, so you need to hurry.

I had a fantastic time last night, and I am really quite sad that The Sandman won’t be around any longer. I want to say a massive thankyou to Steven Abbot and Sandman for all the years of laughter they have provided to me, and particularly for putting on a brilliant show last night. I had a blast.