Yesterday myself, Ross, Sam and her boyfriend Jack headed to Supanova at the Melbourne Show Grounds.  For those of you who don’t know, Supanova is a massive comic book/ sci-fi/ fantasy/ anime/ gaming convention that is held in Melbourne each year.  Ross and I attended Supanova last year, and we had an absolute ball.

I was Velma for the day.  I have wanted to dress up as Velma ever since I got this wig.  She’s my favorite member of Mystery Inc, because she’s the cleverest.  She also has a cute, sexy air about her, and proves the old adage that geek chicks are hot.  It was also a great excuse to wear my glasses instead of my contact lenses.  I always find that when I wear my contacts to big events, my eyes feel like they’re filled with sand by the end of the day.  I was so pleased to be dressed as Velma. 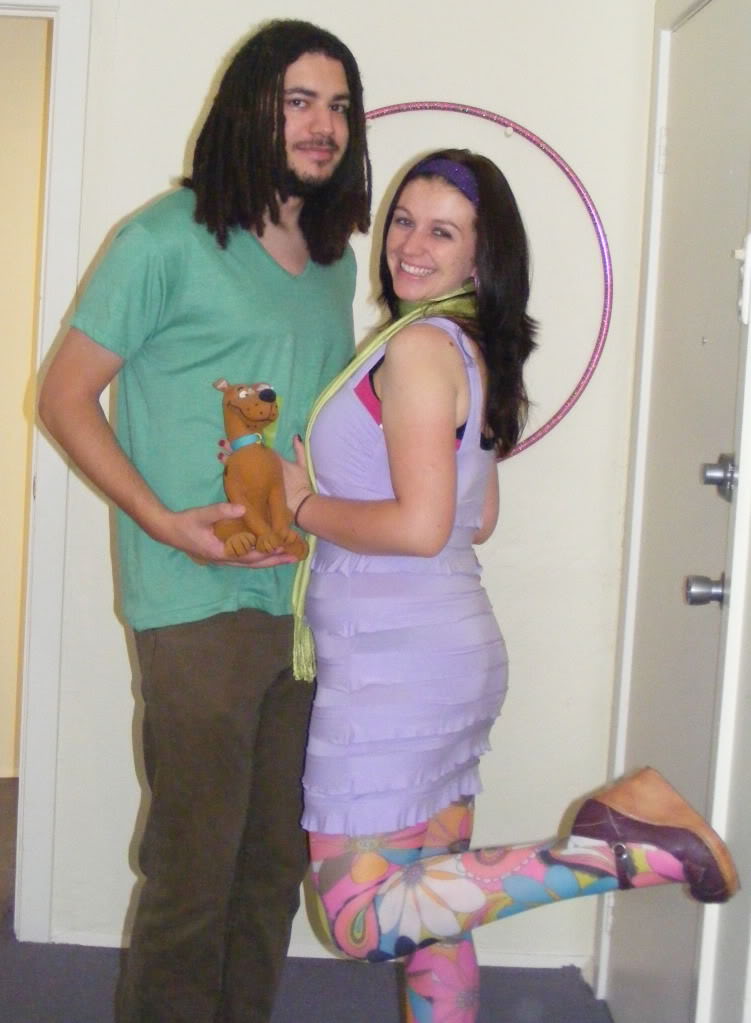 My lovely housemate Sam and her boyfriend Jack were Daphne and Shaggy.  They were so cute together.

And Ross was Fred, in this amazingly camp wig. 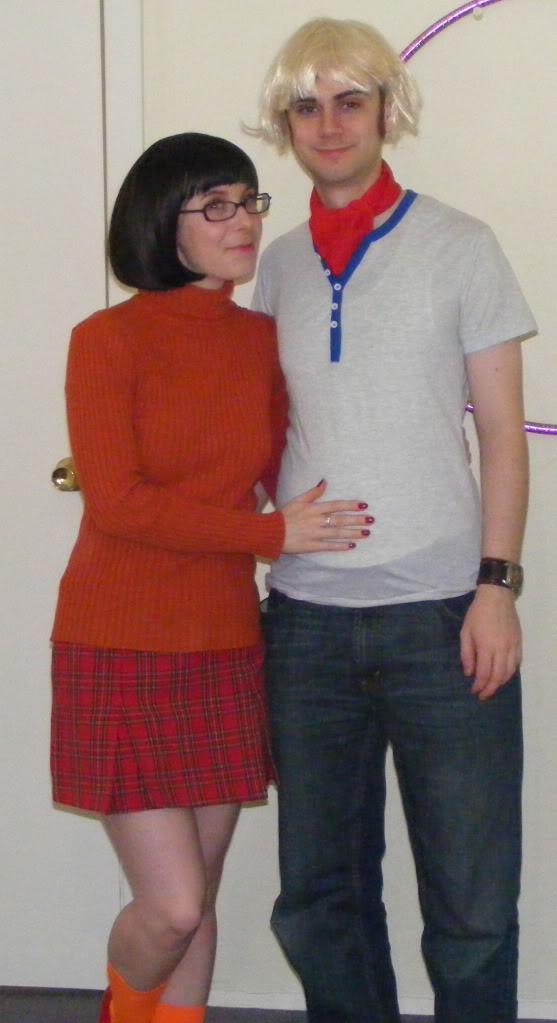 We had a lot of fun at home posing for photographs before we headed off in Ross’s car (sadly, no Mystery Machine for us) to the Showgrounds.

It seems that the Supanova organizers hadn’t learned a great deal from last year.  Once again, I found the event to be spectacularly disorganized.  At conventions, you have to queue a lot.  That’s just part of the nature of the beast.  However, it was often really unclear where you were supposed to queue, and several times during the day I found myself in the wrong queue.  Next year, I really hope that the organizers get their act together and perhaps hire some guardrails or even witches hats to help keep the queues crisp and clear.  If they had done this, it would have made my day gone much more smoothly.

After queuing for what seemed like hours, we finally got into the venue.  The first thing we did was make a beeline for the convention room where they were holding a panel interview with Simon Pegg and Nick Frost.  We were all ridiculously excited for this.  I’m a huge fan of Simon Pegg and Nick Frost, and I particularly love their film Shaun of the Dead (an oft-quoted masterpiece in my house).  Ross and I have also been working our way through their old television series Spaced, which I adore.  The comedy duo were in Melbourne promoting their new film, Paul, which is set to be released in Australia next week.  The pair took to the stage at 11 o’clock, to the roar of hundreds of excited fans.  It was probably one of the best celebrity panels I have ever attended.  My Pegg and Mr Frost were hilariously funny and very down to earth. They happily answered every question that was thrown their way (even those that were mildly inappropriate).  They cracked jokes and laughed their way through the hour-long panel.  They were so easy-going and personable, it was fantastic.  I tried to take photos, but they were rubbish.

There were a few other celebrity guests at Supanova this year, including Charisma Carpenter of Buffy the Vampire Slayer fame.  We also saw Tom Felton (Draco Malfoy from Harry Potter) getting out of a bus, but he was gone so quickly I didn’t have a chance to take a photo of him.

Another guest that was supposed to be at Supanova was Christopher Lloyd.  I was so freakin’ dissapointed when I found out that he had cancelled.  Even though Mr Lloyd wasn’t present, a very important automobile from one of his most iconic films was: 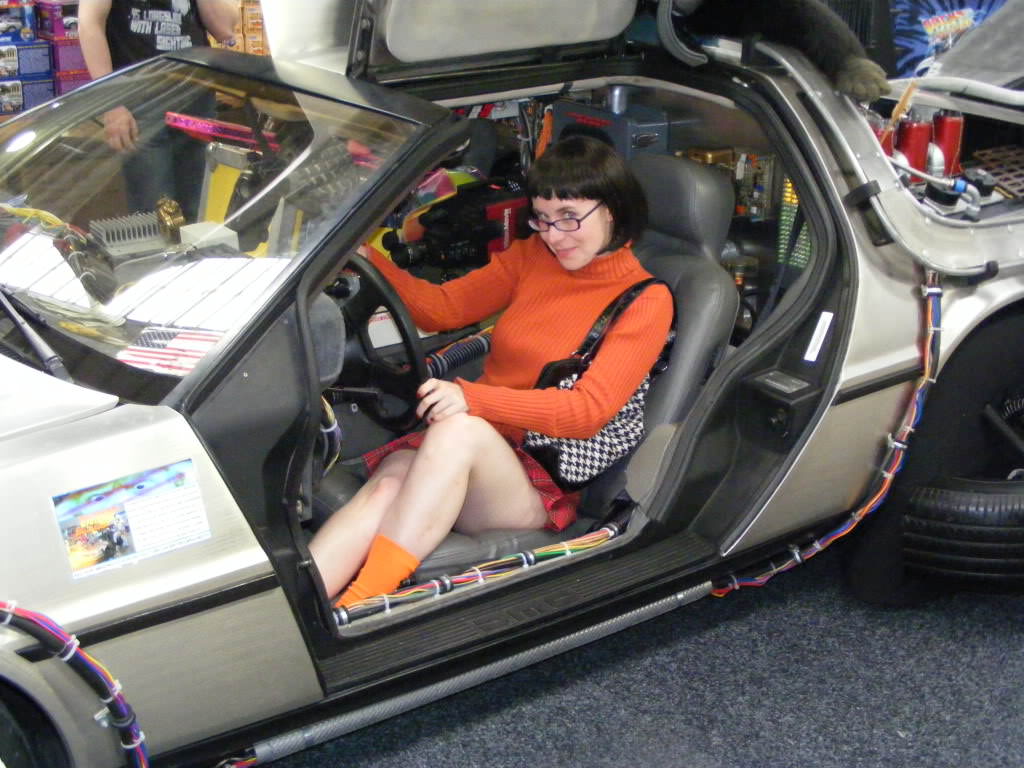 Why yes, this is me inside the mother-funkin’ Delorean.  That’s Marty McFly’s hoverboard in the passenger seat and the Sports Almanac on the dashboard.  Sitting in this car fulfilled one of my childhood dreams (although I did hit my head pretty hard getting out, which was not so cool).

Here’s Sam in the Delorean: 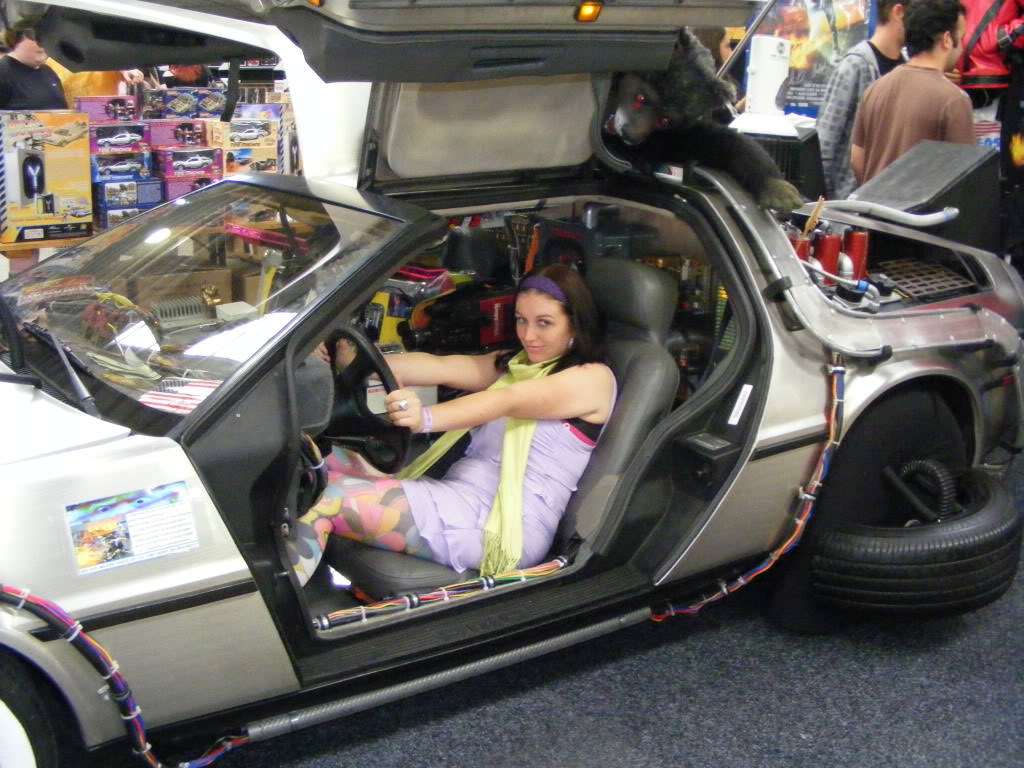 Over the course of the day, we posed for so many photographs.  I had expected to be asked for a couple of pictures, being that we were in costume, but it seems that everybody wanted a picture with the Scooby Gang.  It was pretty good, except for when people were asking for pictures while we were eating lunch.  That wasn’t so cool.  We had such fun taking pictures otherwise though.

My favorite thing about conventions is the cosplayers.  You always see the most incredible costumes at conventions.  Yesterday, I saw some very impressive costumes, inluding some great Dr Whos, a TARDIS, a very realistic Vega, a gaggle of Disney Princesses, Dorian Grey, a brilliant Mario, a family of Boba Fetts, a baby dressed as Princess Leia and many more.  I was a bit sad that I didn’t get photos with them all.

Here are some pictures of my favorite costumes from the day: 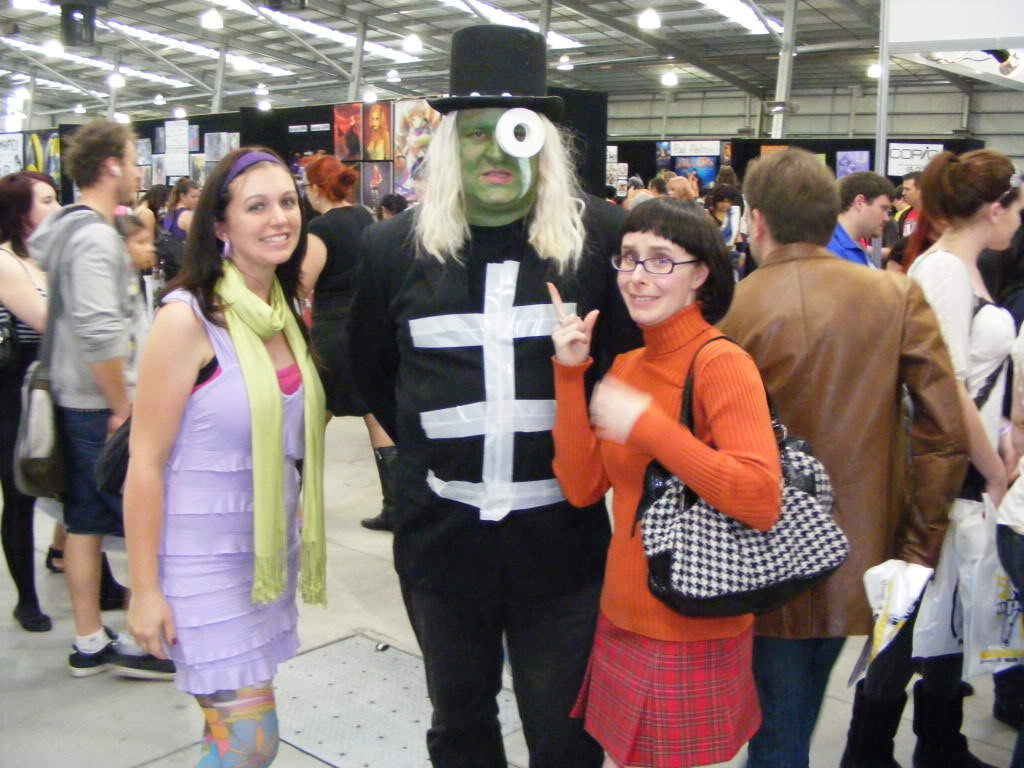 It’s The Hitcher, with his solo polo peeper.  He didn’t have any eels though. 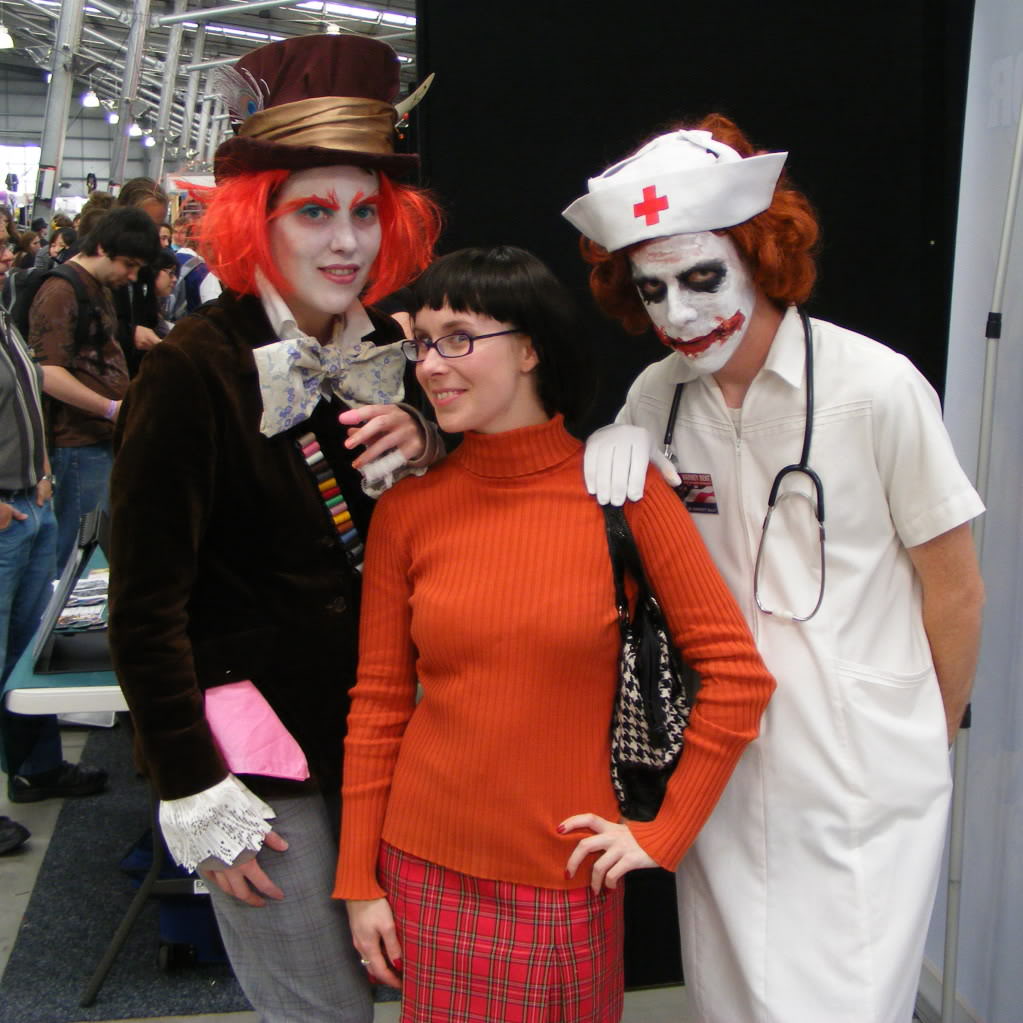 The Hatter and the Joker. 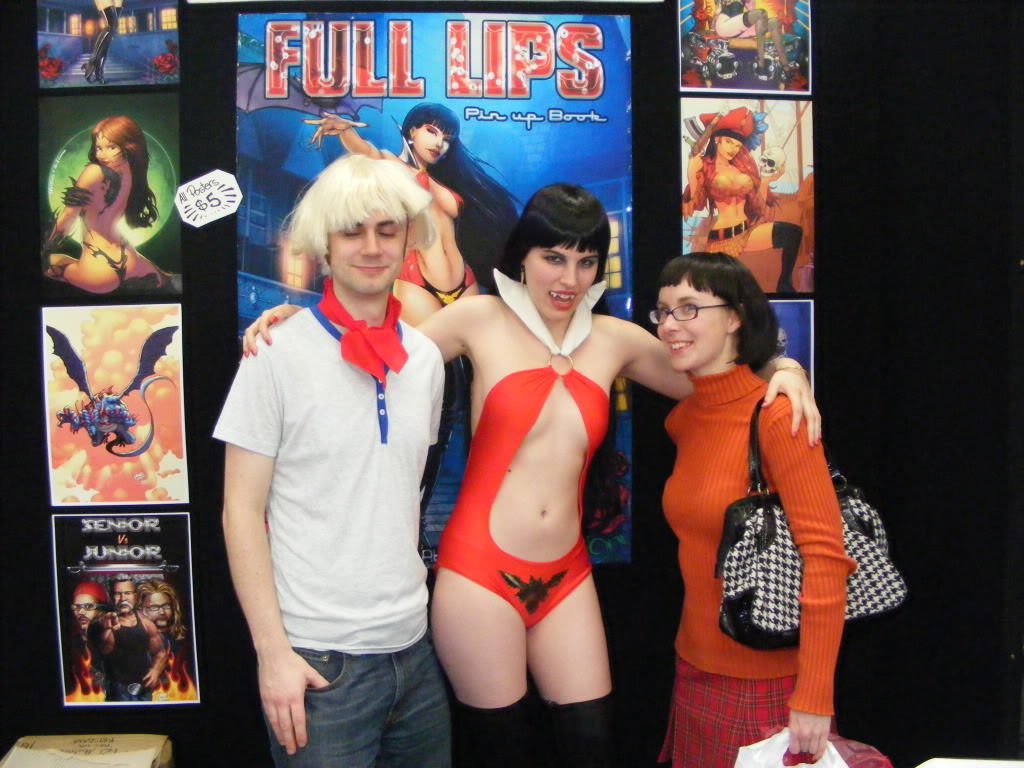 Me and Ross with Vampirella.  I think Ross’s eyes are closed because he was blinded by exposure to pure awesomeness. 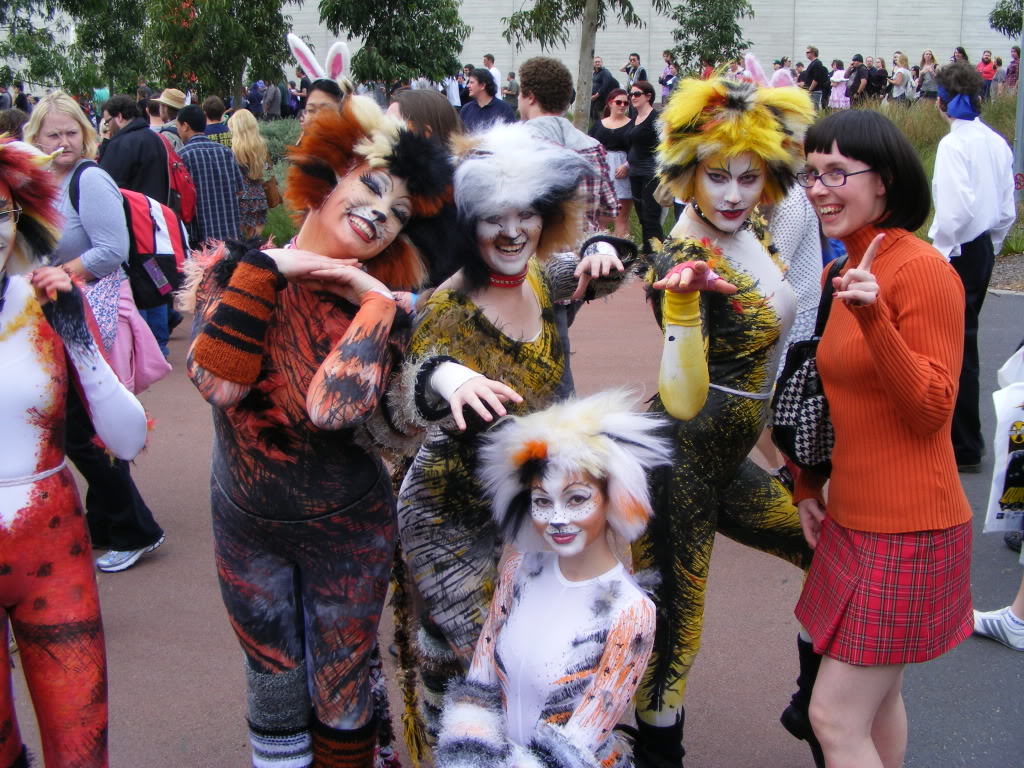 CATS!  These girls were incredible.  I was especially excited because the one crouching in front is Jellylorum, my cat’s namesake. 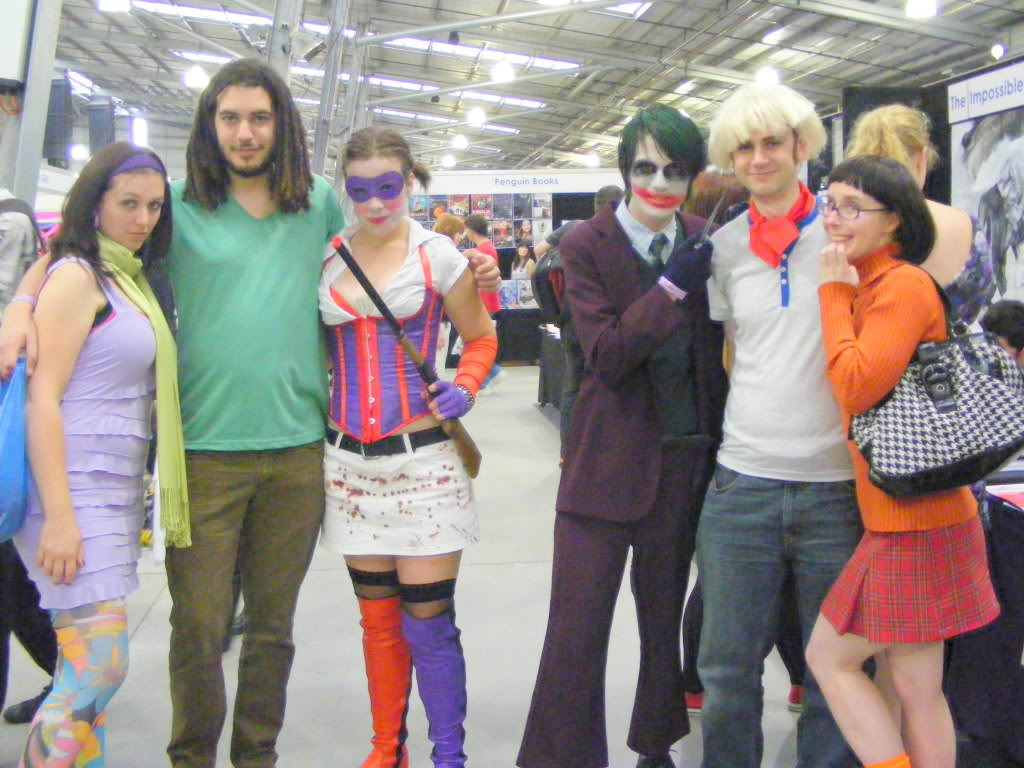 Yet another joker and a really cool Harley Quinn.

It was a brilliant day and I had a fantastic time.  If you missed out this year, that’s too bad.  Never fear though, Supanova will be back in Melbourne next year, so you can join in the festivities then.  It’s totally worth it, particularly if you’re into comic books, alternative fashion, sci-fi, fantasy or anime.

Thankyou to the rest of Mystery Inc for an awesome day.