About a week ago, I got an email from a friend of mine who had some tickets to Red Bennies Rocky Horror Night, and she wanted to know if I was interested.  I think my exact answer was something like, “Mnuuuagh!”.  Eventually though, I managed to pull myself together enough to give a coherent reply of, “Yes please”.

So last night me and a couple of friends donned our Rocky costumes and trekked down to Chapel Street to Red Bennies.  I decided that it was the perfect opportunity to wear my Columbia costume again: 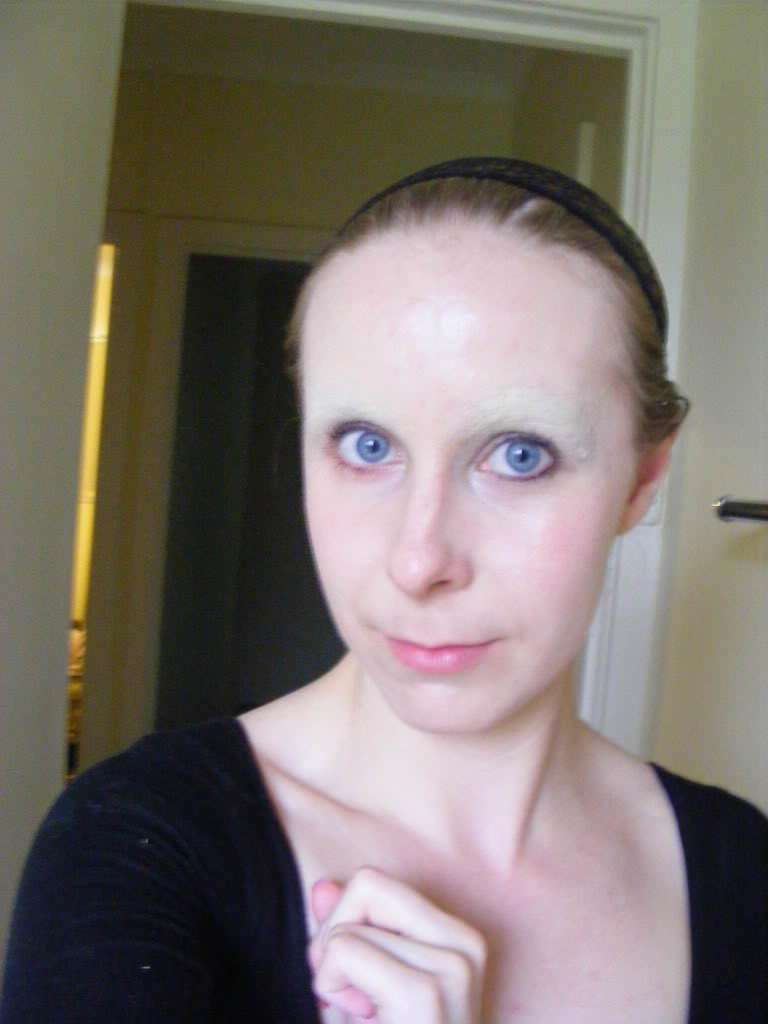 Here’s a scary picture of me with no eyebrows.  I tried a different method of covering my brows this time, and I was very pleased with the end result.  I did look rather freakish for a while before I applied the rest of my makeup. 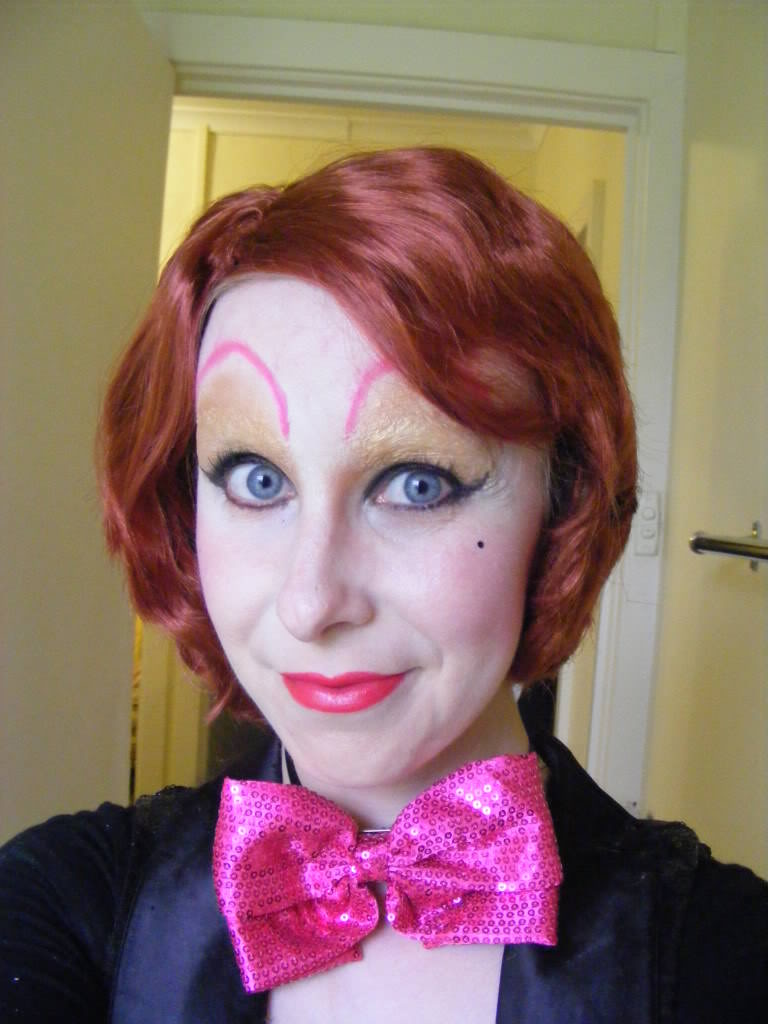 And, here’s what I looked like with the rest of my face on. 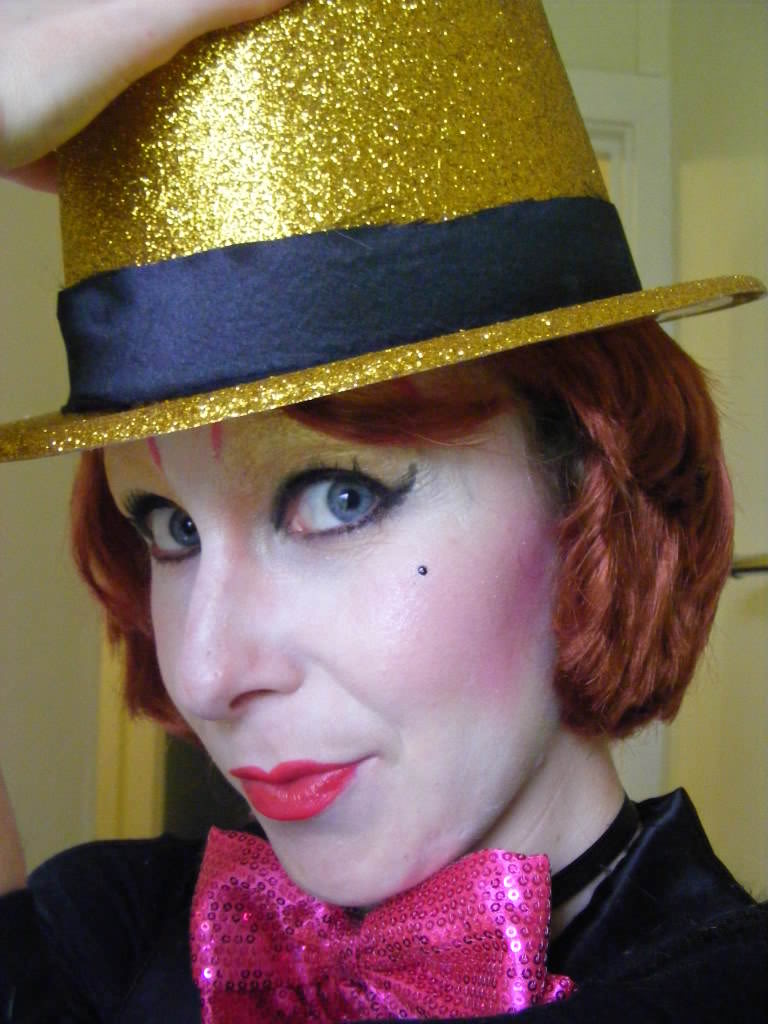 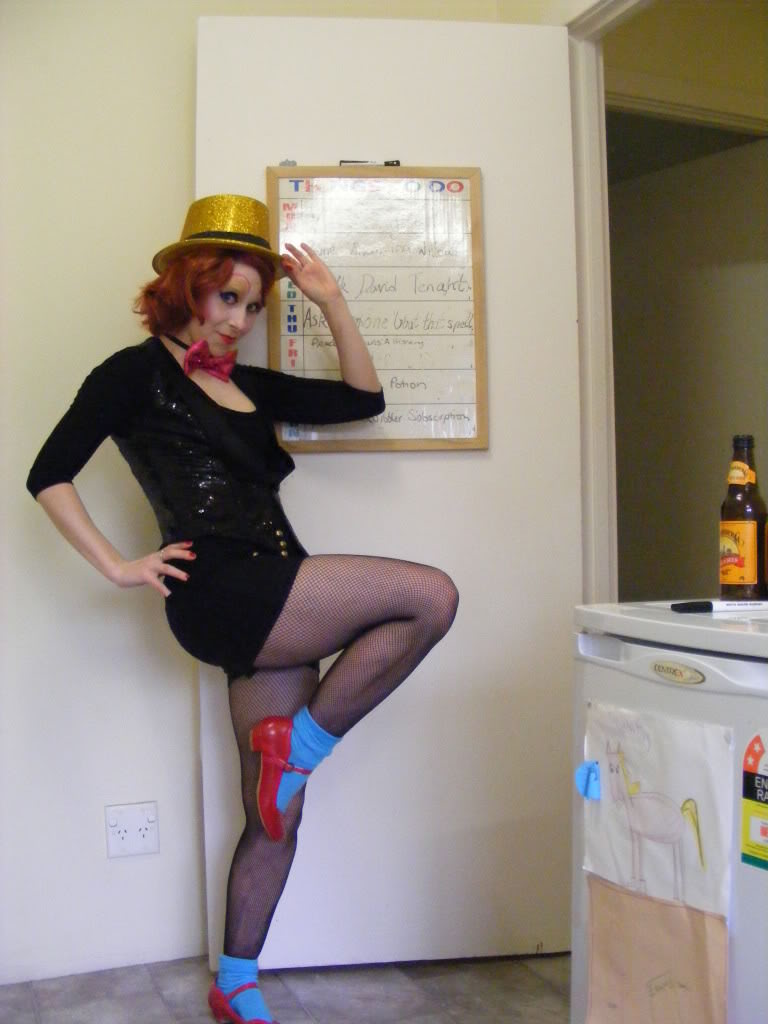 Red Bennies is a burlesque club on Chapel Street.  They have a huge range of performers and a fun, speak-easy style atmosphere.  We arrived very early so that we could stake out some good seats.  There are booths all around the stage area, but we chose a table directly in front of the stage.  The place is lit with dim red lights and tealight candles on each table.  The bar staff wear waistcoats and pour elaborate cocktails into tall glasses.  Slowly, other patrons began to arrive.  Being that it was Rocky Horror night, there was a wide variety of people pouring through the door.  Many people were in full Rocky regalia, while others were outfitted in gorgeous vintage ensembles.

The show was presented in three segments. Dolly Diamond was the host for the evening, and she was utterly fabulous, spouting camp jokes and witty banter in between each performance.  Each segment featured three performances.  The performances were all extremely different from one another, but they were all massively entertaining.  We saw everything from stripteases to cabaret, from contortion to fan-dances.  There were both male and female performers and all were tremendously talented.

In between each segment of the performance, there was an intermission so that patrons could buy more drinks or dance to the loud music pumping out of the speakers.  The whole atmosphere of Red Bennies was very tongue-in-cheek and welcoming.  Everyone was getting along well and there was a lot of fun to be had.  I’m not normally one for dancing, but I had a ball on the dance floor last night.

At the end of the performances, there was a costume competition for all the people that had dressed up as their favorite Rocky character.  I entered, but sadly I didn’t win.  I wasn’t surprised though, because there were some amazing costumes in the crowd, and some people had really gone to great lengths to ensure that their costumes were as authentic as possible.  There was one guy dressed as Frank N Furter who had even drawn on a replica of Frank’s ‘Boss” tattoo.

I had a fantastic time at Red Bennies, and I am eager to return for another of their shows.  Red Bennies is located at 373 Chapel Street, and offers a wide range of burlesque and cabaret style performances.  I highly recommend you check it out.

Without any further ado, here are some pictures from last night. 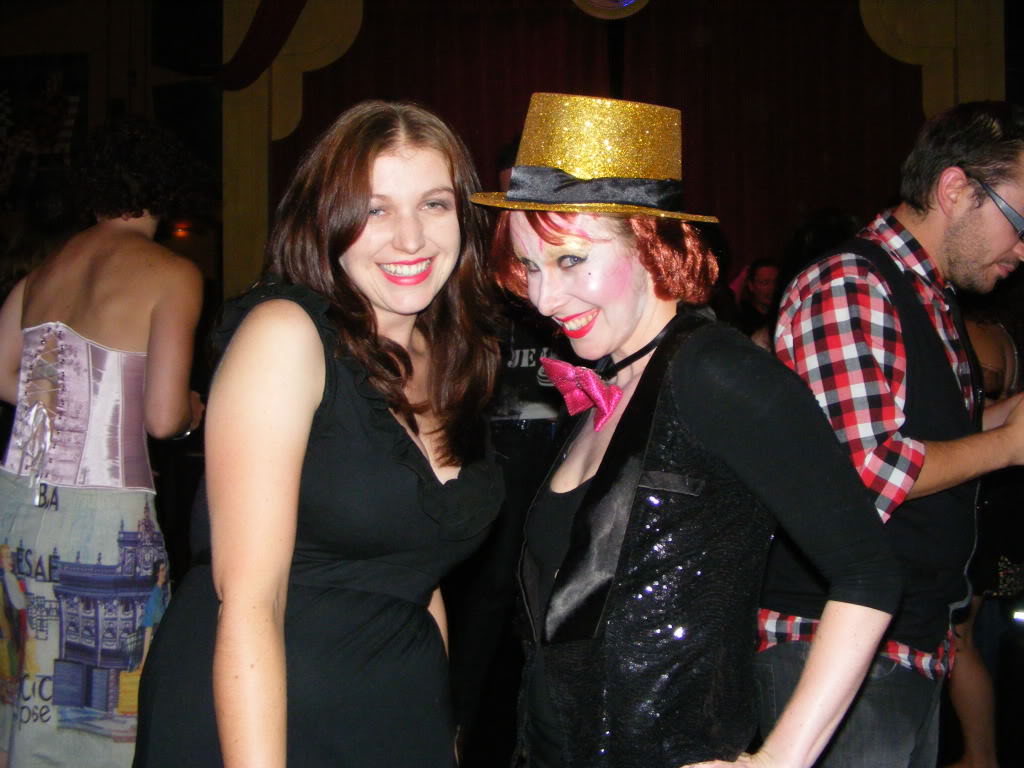 This is me and Sam, my housemate. 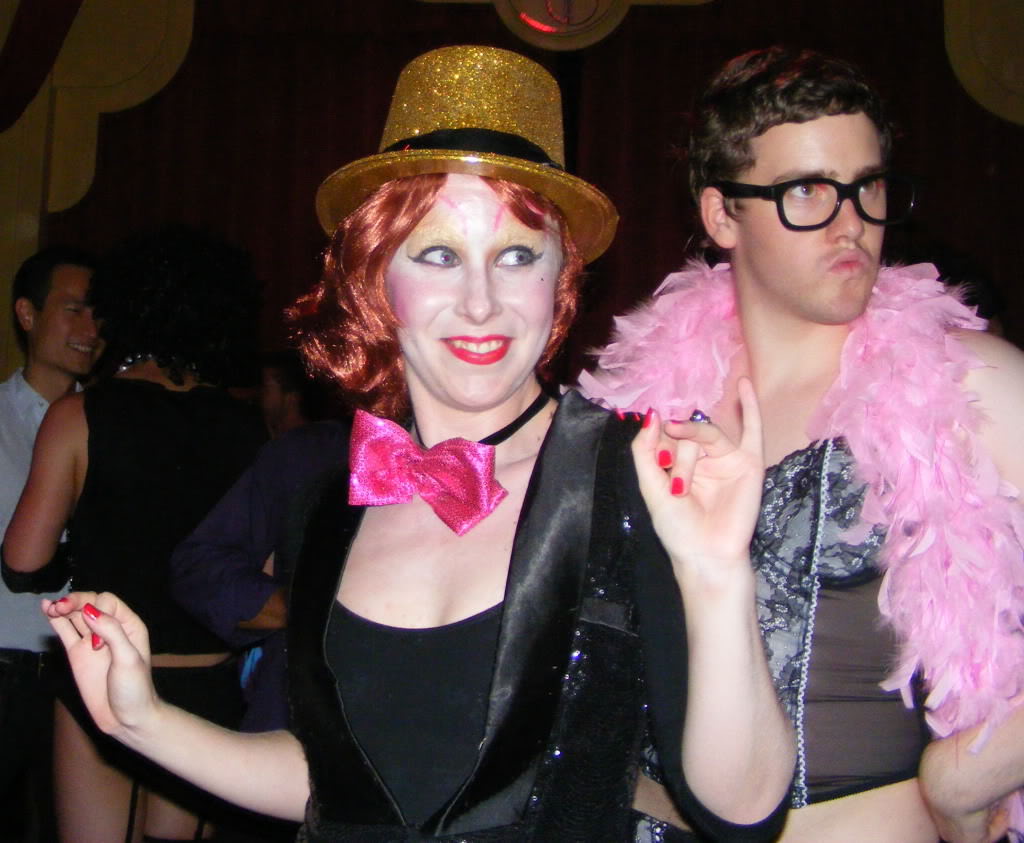 The guy I’m dancing with in this picture was dressed as Brad from the floorshow scene.  He was so funny and he’d put a lot of effort into his costume.  We were hanging out all night with him and his friend, who had made her own brilliant Magenta costume:

I got my photo taken with this guy who was dressed as Frank N Furter.  I thought that he should have won the costume contest, because not only did he look great, but he really stayed in character for the whole night.  In between each set of performances, he was dancing up on the stage and he was so eager to have photos taken with everyone.  He even danced the Time Warp with me at the end of the night. 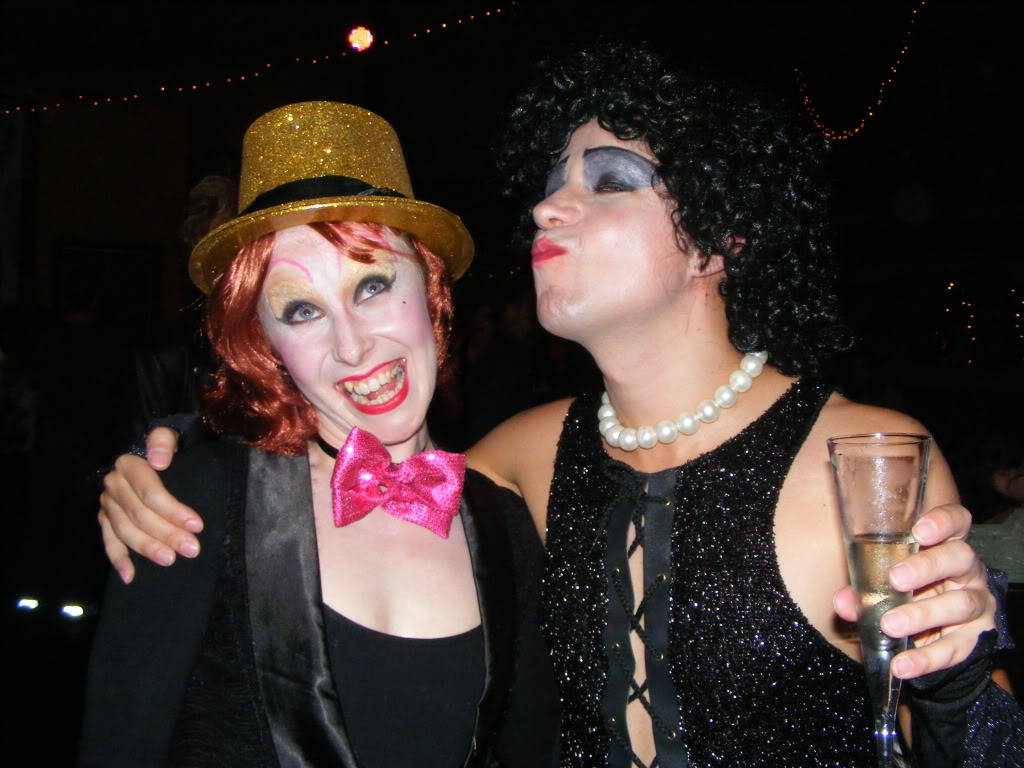 Unfortunately though, this is a dreadful photo of both of us.  We’d posed for a great picture, but there was a delay with my camera, so the picture was taken a split-second after we’d stopped posing.  That’s why I look so awful, but I still wanted to put this picture up to pay homage to this brilliant individual: 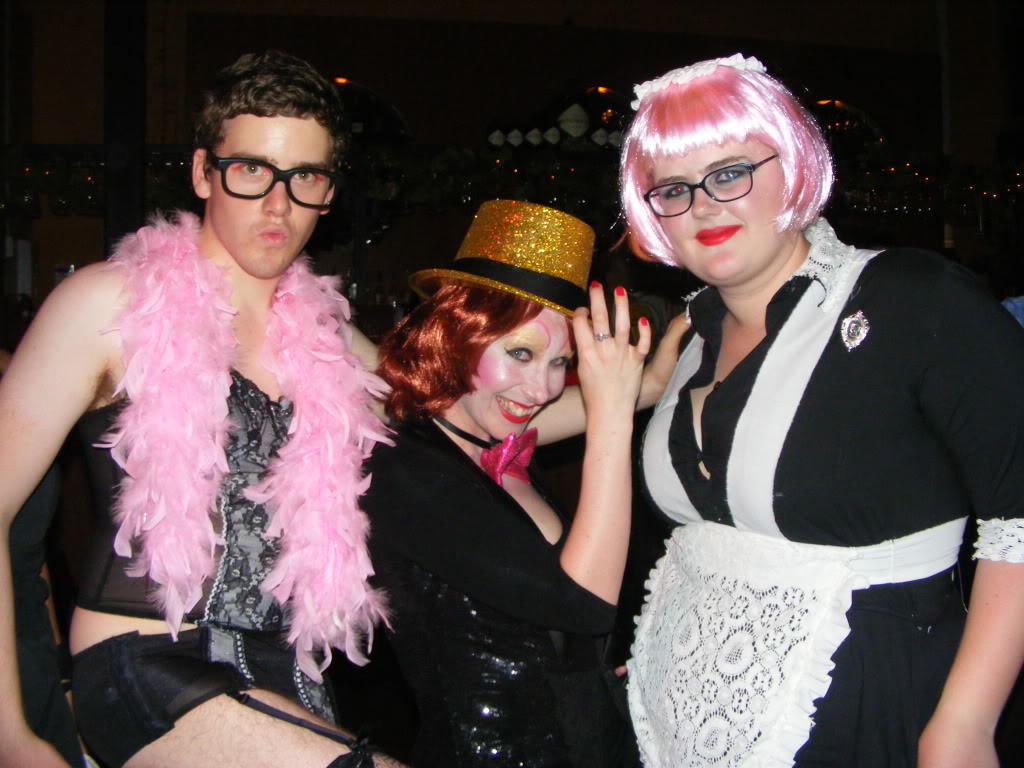 A great big THANKYOU to Liz for giving us those tickets.  I really appreciate it and we had a fantastic night. I will certainly be heading back to Red Bennies in the near future.