Yesterday, I attended the first Nuffnang meetup for 2011 at Pan Asian restaurant on Chapel Street.  It was set to be an exciting day, and I was looking forward to meeting lots of new people, as well as catching up with a few old friends.

One thing that I love about meeting up with a bunch of bloggers, many of whom write about beauty and fashion, is that you can dress up in anything that you like.  You really do have a lot of licence to experiment with fashion when you’re a blogger.  I wanted to wear something sweet and feminine, that had a fairy-princess vibe.  I chose a long skirt, a corset and flat sandals.  I pin-curled my hair and loosely combed the curls out with my fingers so that they separated a little.  I applied soft makeup with plenty of glittery accents.

– Floral garland (handmade by me)

– Pink and black corset from Target

Here is a close-up of my makeup: 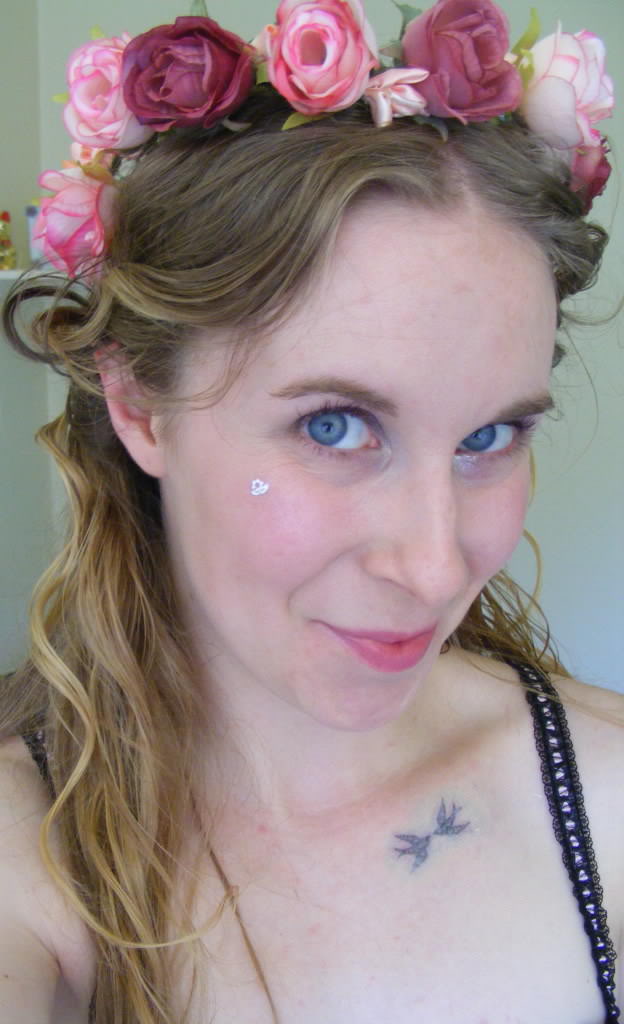 So many people complimented me on my floral garland.  I made it myself about a week ago.  I have several more in different colours that I’ll be listing on my etsy store in the next couple of days.  I’ve just been waiting for some fine weather so that I can take some really good pictures of them.  Keep your eyes peeled for them in my etsy store. 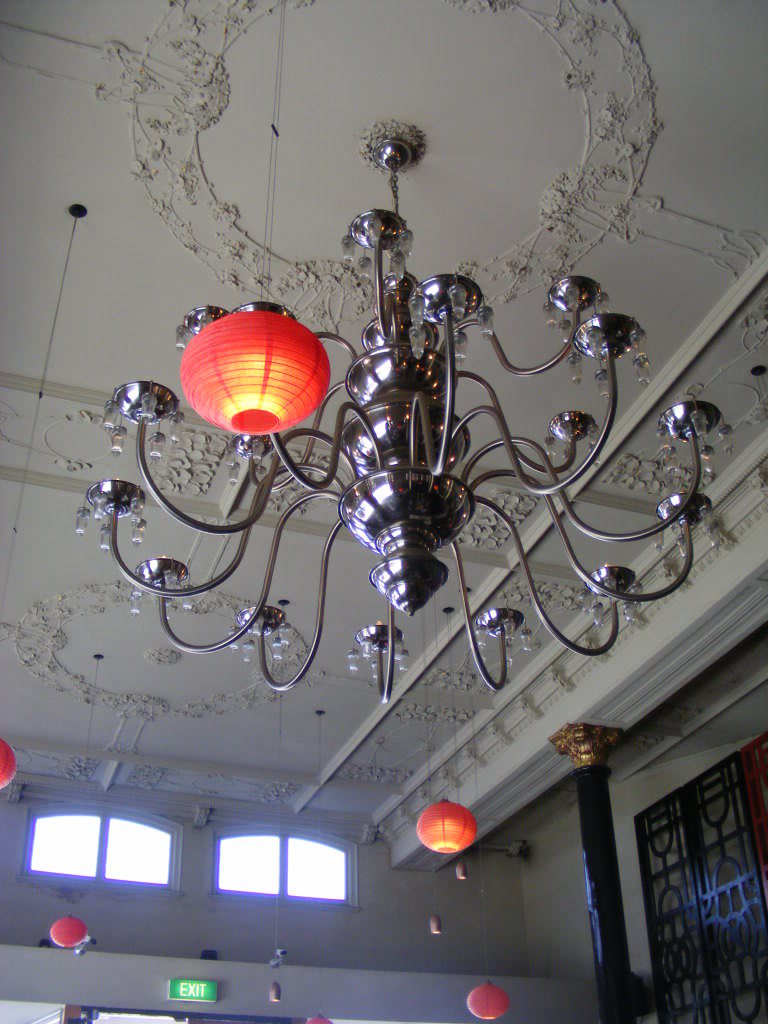 I travelled out to Chapel Street for the meetup.  We met at this fantastic Asian restaurant called Pan Asian.  The decor of the restaurant was really interesting, and there was an amazing chandelier in the middle of the roof.  I took a picture of it:

I didn’t realise until Violet pointed it out to me, but the entire thing is made out of cooking utensils, like mixing bowls and salt and pepper shakers.

The food was utterly amazing.  The waitstaff bought out a series of small dishes for us to sample, and there was plenty of food for everyone.  I can be a little picky with food, but I decided that I would at least try every single thing that was bought out.  There wasn’t a single dish that I didn’t like, and I wound up trying some things that I wouldn’t have dreamed of ordering for myself, which was great. 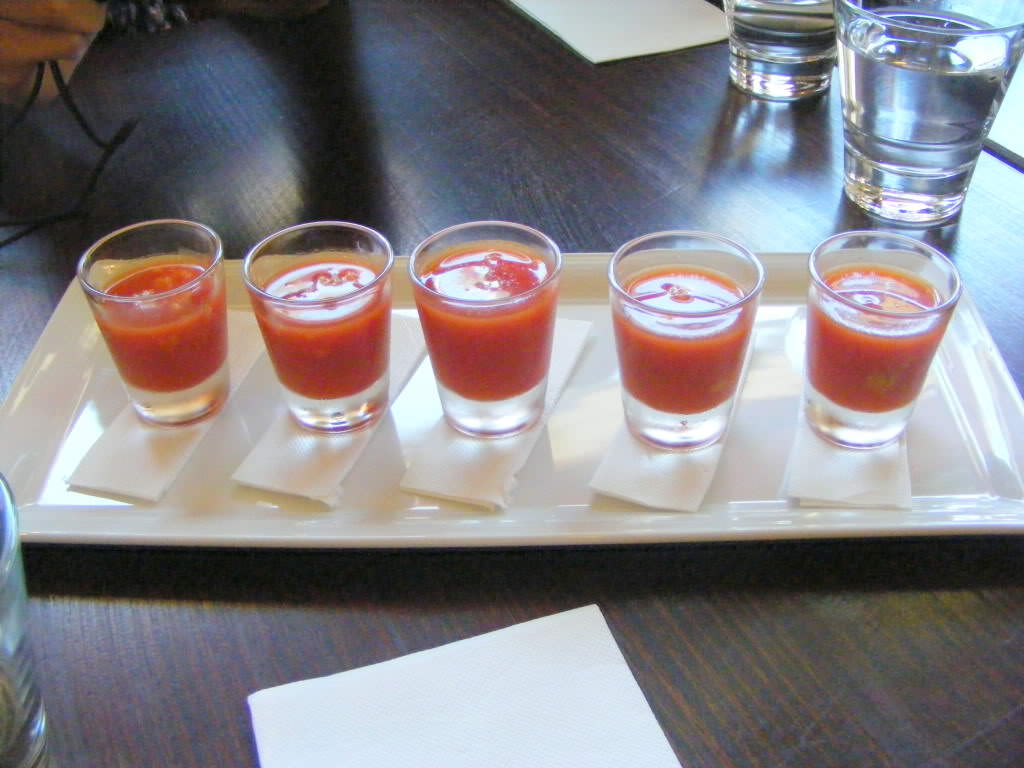 The first dish was gespacho, which is a chilled tomato soup.  I was very hesitant to try this, because I despise tomatoes.  I actually really loved the gespacho though.  It wasn’t bland the way that tomato soup normally is, it had a rich, herby taste.  It was very refreshing and tasty. 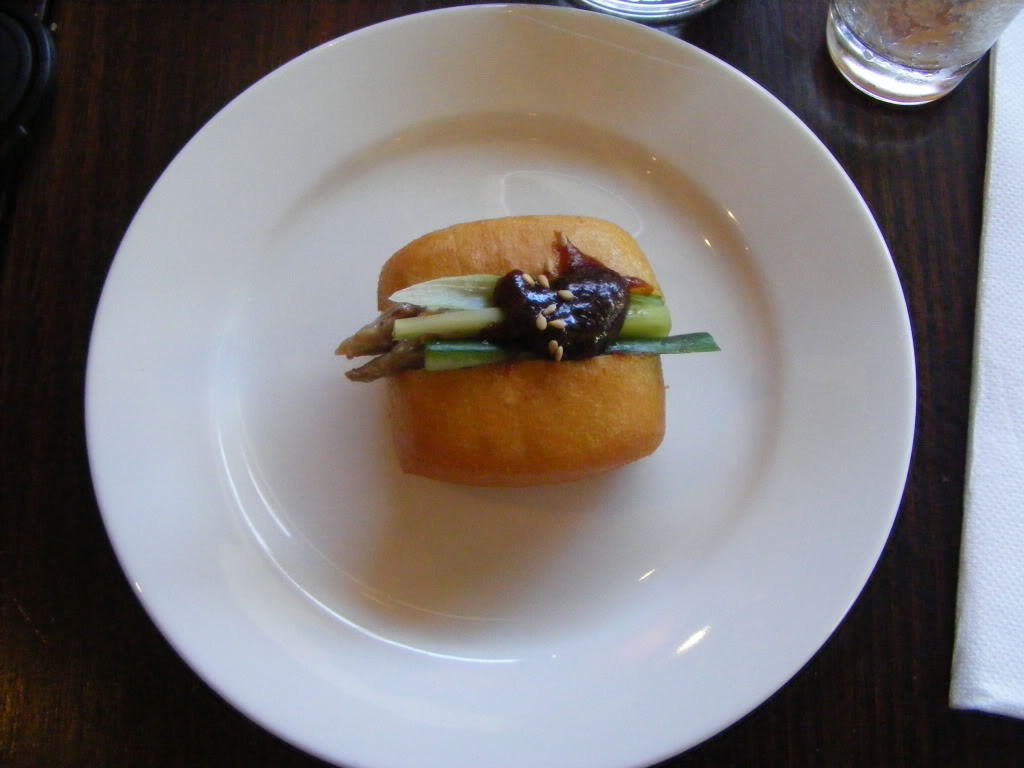 The next dish was a miniature duck burger.  It was really tasty, with crisp greens on the top. 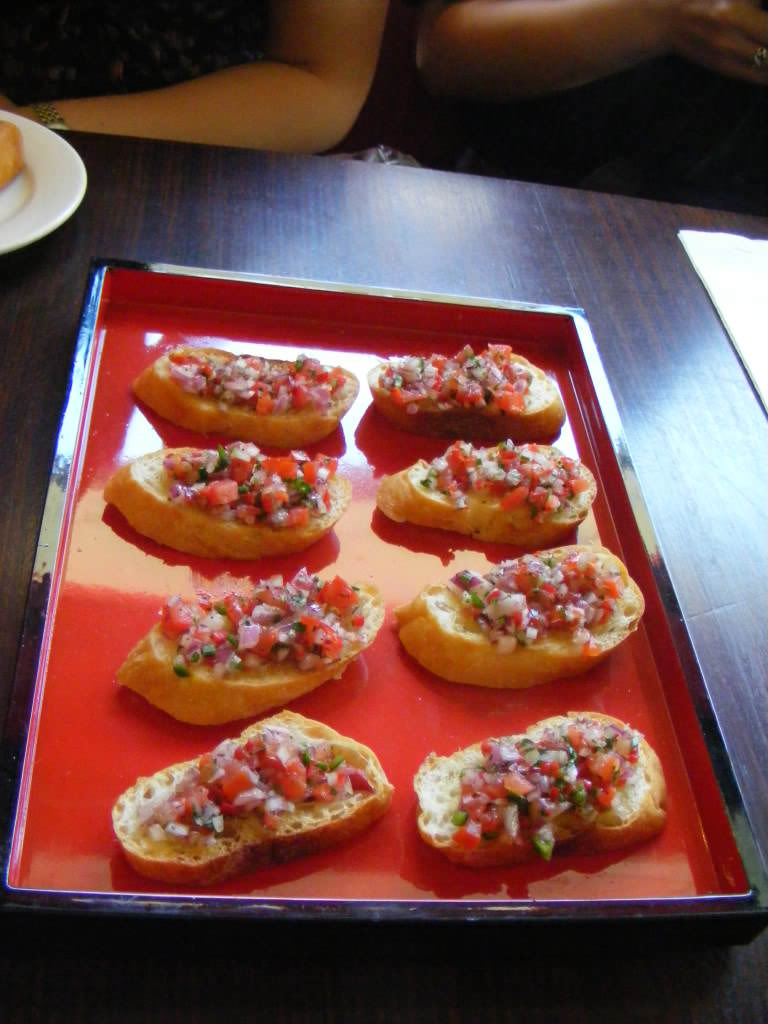 Next, we were given some brushetta.  Again, I was slightly hesitant to sample this because of the tomato, but I really liked it. 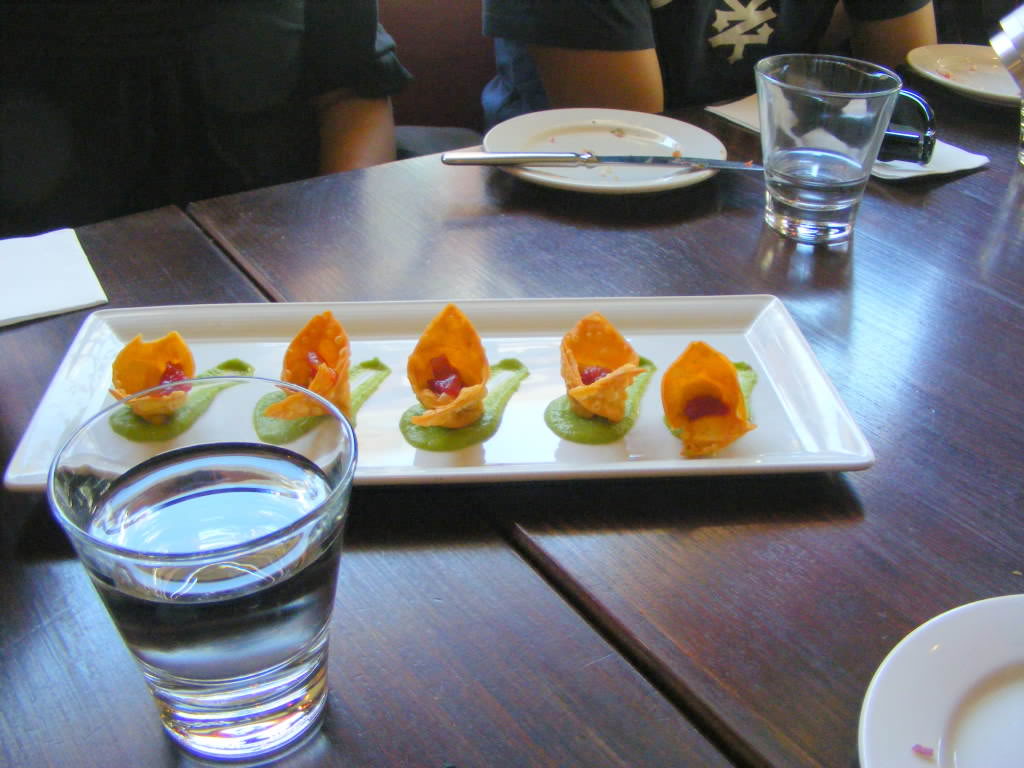 These were cauliflower samosas. I love samosas, and I could have happily eaten a whole plate of these.  They were quite spicy, but filled with flavour. 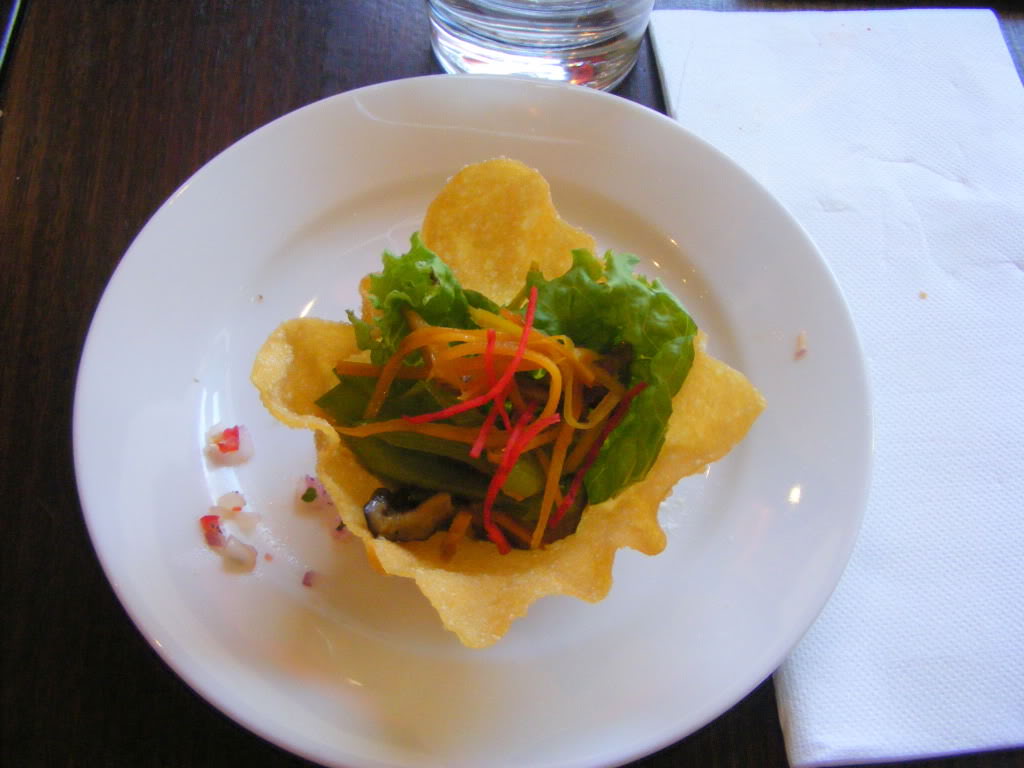 This little parcel is an open spring roll.  It has all the incredients that are normally in a spring roll, but instead of being bound up into the wrapper, it’s left open.  It was really delicious, although it was a little bit difficult to eat. 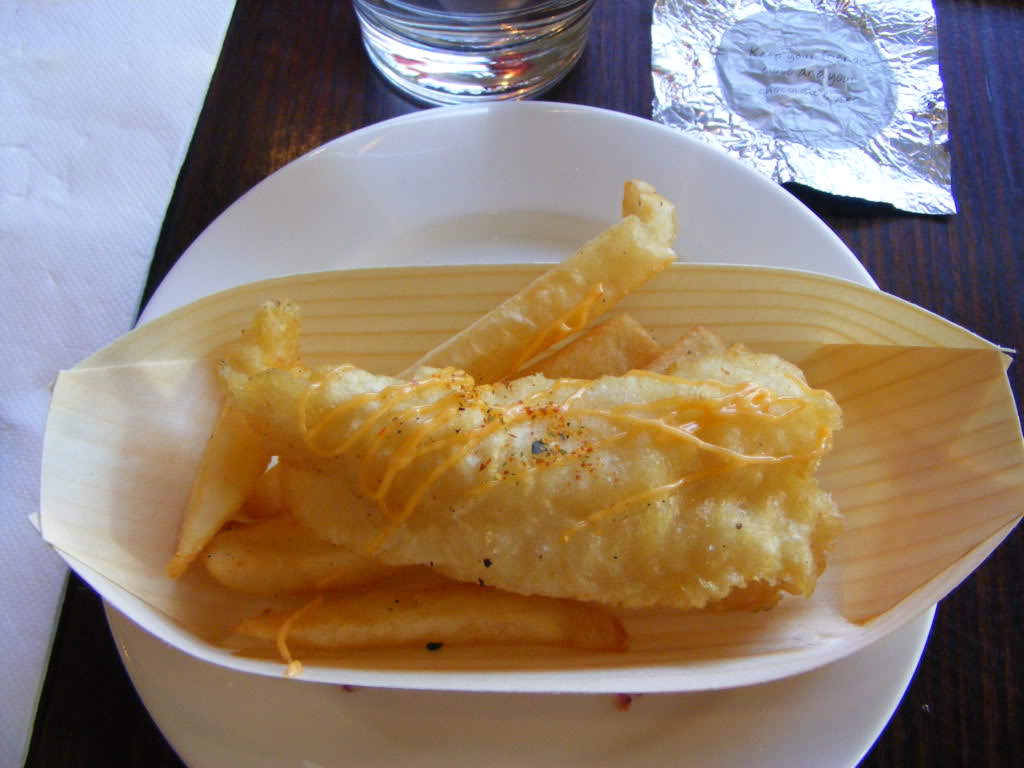 This was my favorite dish of all- mini fish and chips!  The fish was so tender that it just crumbled in your mouth, and the chips were fried to perfection.

We also got little brownies for dessert, but I was too addled by the chocolate to take any pictures of them.

I met up with lots of new bloggers who I hadn’t met before, so I now have a huge list of blogs to check out.  I’ll keep you guys up to date with any new developments on my links page.  I also met up with Violet LeBeaux, Jimmy America and Celeste of Berry Travels.  Sadly, the meetup was also a going-away party for Celeste, who is leaving Melbourne very shortly.  It was lovely to meet her before she jets off though.

I had a really great time, and I wanted to say a massive thank-you to everyone who organized the meet-up, as well as the staff at the Pan Asian restaurant who put on a brilliant spread for us.

Here are a few other awesome things that I witnessed in the city yesterday:

– A girl walking around in a black floral dress and a pair of silver knee-high Dr Martens. She looked incredible.

– A guy making out with his girlfriend, who was trying to undo her top in the middle of the Bourke Street Mall.

– Two guys spruiking out the front of a men’s shoes clearance house, who were saying things like “These shoes are only $40!  Surely they must be made of dog or somesuch thing?  No, they’re made of genuine Italian leather”.

– A man with a hot pink mohawk

– a park bench with the Swedish Chef graffiti-d onto it.

I hope your weekend has been as good as mine!