For Christmas, I was lucky enough to recieve two tickets to see Hairspray the musical at the Princess theatre.  On Sunday, Ross and I headed into the city to check out this awesome production.

I absolutely loved both film versions of Hairspray.  I’m a sucker for 1960’s style, and the story is set in the early 60’s, at a time when rock and roll music was huge, segregation was a hot topic and big hair was all the rage.  The story’s heroine, Tracy Turnblad, is spunky, upbeat and has a very highly-tuned moral compass.  Tracy is one of my favorite characters of all time because she always tries to do the right thing, even at her own expense.  It’s also refreshing to see a female lead that is completely happy with themselves, and isn’t afraid to chase the spotlight.

I knew that I was going to need a 60’s style outfit for the show.  It was equally important to me that I have a spectacular hairdo.  I chose this dress because it’s genuine 60’s vintage.  I accessorized with bold graphic pieces.  For my hair, I decided on a beehive, but I didn’t tease it too high, because I didn’t want to block the view of the people sitting behind me.

– White glomesh clutch, which used to belong to my nana. 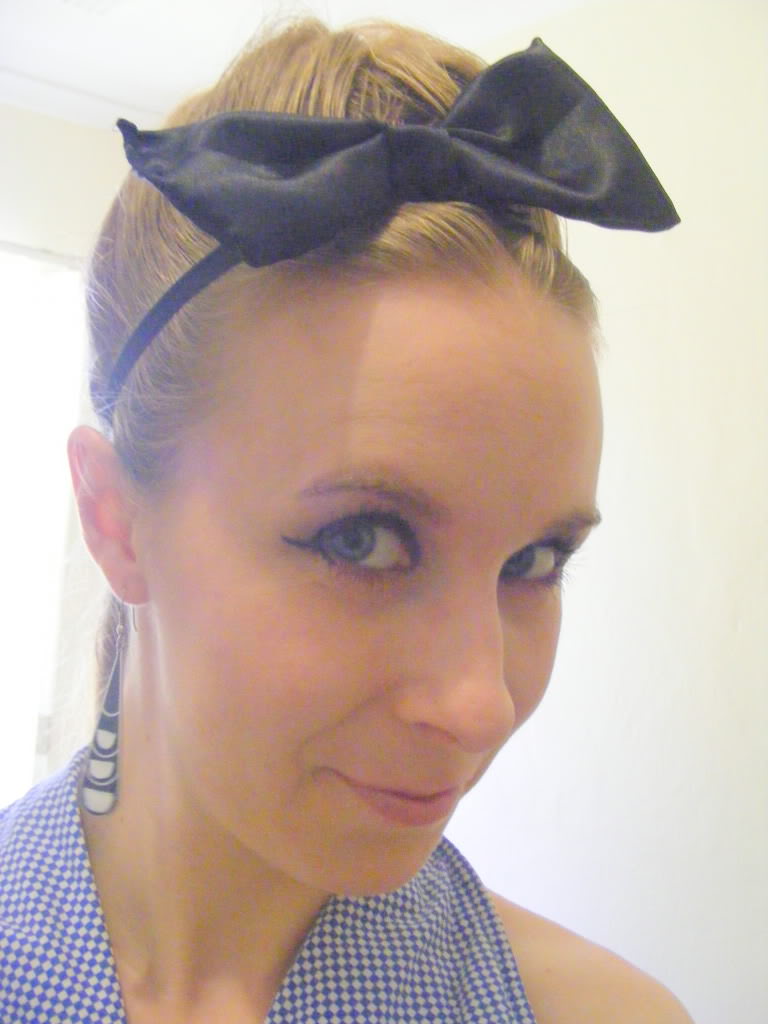 The show was utterly brilliant. I think it was the best live show I’ve seen in years.  When we first entered the theatre, the stage was set up like a giant television set.  While we waited for the show to begin, they played newsreels, television commercials and propaganda films from the early 60’s.  Once the lights dimmed and the show began, the stage lit up with a series of twinkling lights and Tracy, the heroine, dropped down from the ceiling and began belting out the opening number.  Rather than fiddling about with set changes, the scenery was projected onto a screen at the back of the stage, so that it could be changed very quickly.  The scenery could also move, and there was plenty of cool interactive effects, such as Tracy opening her bedroom window (which is a projection) and  a student in detention writing lines that appear on the blackboard.

The show had a cartoon-like element, with the projected scenery, bright colours and oversized props.  The costumes were amazing, and featured plenty of pop-art, mod and gidget-like inpiration.  There was enough glitter to dazzle you to death and sky-high hairdos.

The cast was utterly brilliant also.  Jaz Flowers, who plays Tracy, was filled with energy and vibrancy.  Trevor Ashley was hilarious as Edna Turnblad.  I have seen him perform once before, in Priscilla Queen of the Desert, and this role completely eclipsed that.  He was hilarious and touching in equal measures.  He managed to put so much feeling into the role, and it was just incredible.  The young lady who played Penny Pingleton, Esther Hannaford, had the most arresting voice I’ve heard in quite a while.  She was cute-as-pie as Tracy’s Best friend.  I was also blown away by Tevin Campbell, who plays Seaweed.

The entire show was so energetic and colourful that I had trouble staying in my seat.  I wound up antsy and anxious because I wanted to leap up and dance.  The music was wonderful and the dance sequences were frenetic and beautifully choreographed.  I never wanted it to end.

If you’re in Melbourne and you’re looking for a great night’s entertainment, grab yourself a ticket to Hairspray.  I had so much fun, and I’ve barely stopped talking about it for three days.  I would go again in a heartbeat, and I highly recommend you check it out if you get the chance.