On Saturday night, I hosted a Rocky Horror Picture Show party at my house, to celebrate the end of exams. I have been a huge fan of the RHPS since I first saw the film at the age of fifteen.  It’s a brilliant movie, and I’ve adopted the tagline “Don’t dream it, be it” as my own personal motto.  I couldn’t even tell you the number of times that I have watched this film, and I wanted a chance to share it with my friends, as well as amping up the movie-watching experience to the next level.

Rocky Horror has a huge fan following throughout the world.  It has achieved cult movie status many times over.  In some parts of the world, especially in America and England, there are Rocky Horror cinemas that show the RHPS every Saturday night at midnight.  At these special screenings, die-hard fans come dressed as their favorite characters and armed with an arsenal of props for audience participation.  My aim was to recreate this atmosphere in my own living room.

I asked my friends to come dressed in costume.  This was a bit tricky, as a couple of the people that I invited had never seen the film before, and several had come straight from work, so in the end, Ross and I were actually the only ones in costume. 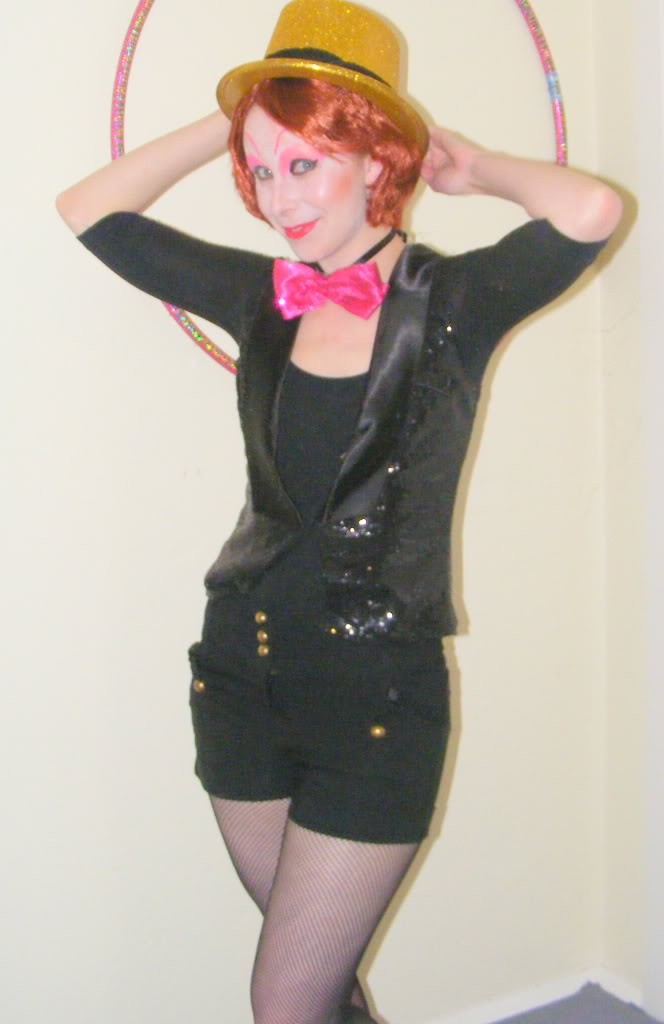 I came dressed as Columbia, who is played by Little Nell in the film.  Columbia has always been my favorite character.  I love her voice, her spunk and her tap-dancing abilities.  Her penchant for sparkles also attracts my favour.

My makeup took about an hour and a half to apply.  I am planning to put together a shorter version in a video tutorial for you guys later down the track. 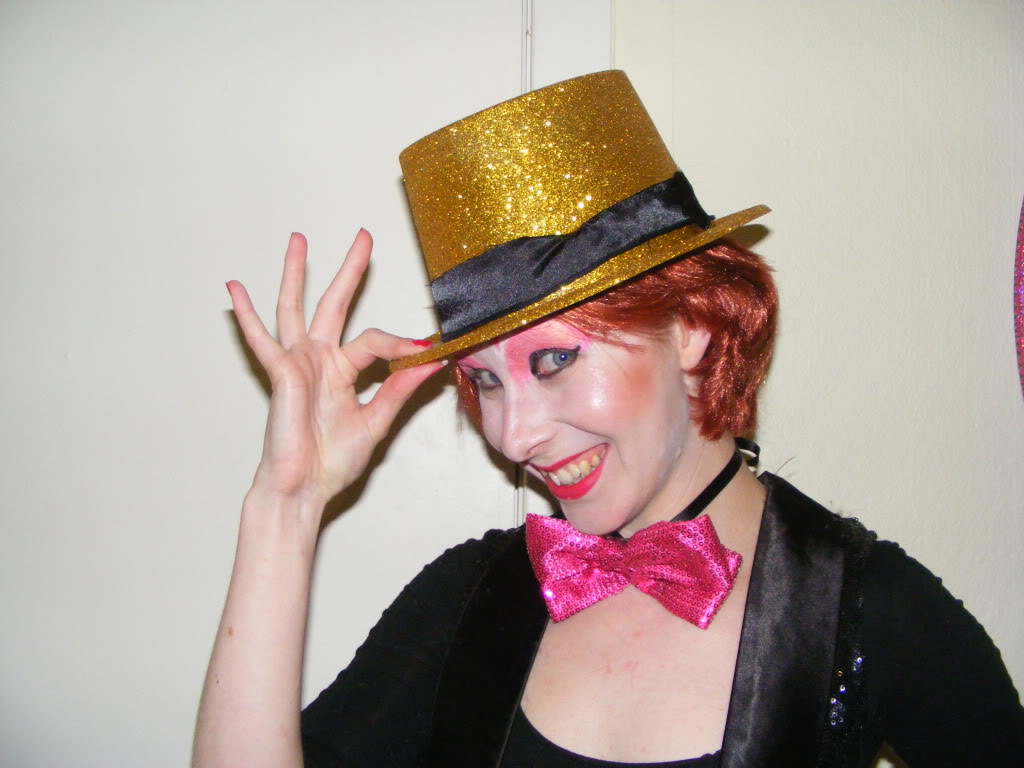 Ross came dressed as Eddie, who is played by Meatloaf in the film.  Eddie is Columbia’s love interest, who has unwillingly donated half of his brain to Rocky- Dr Frank N. Furter’s creation. 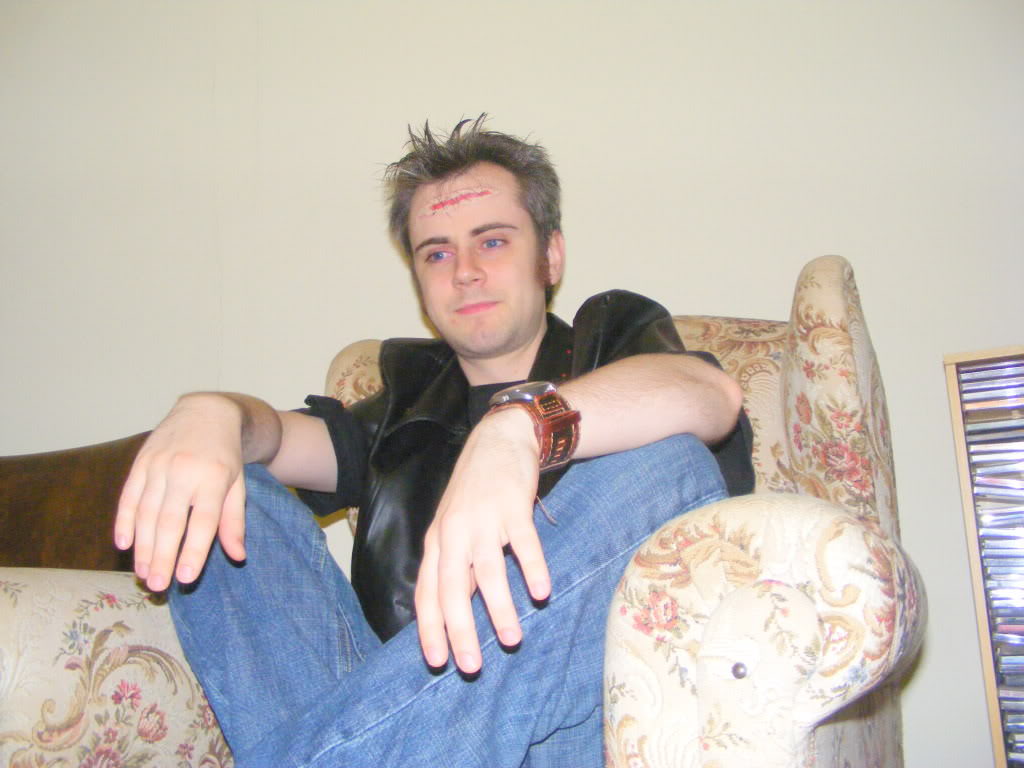 We make a lovely couple, if only Ross would smile.  He was tired out from the long drive to Melbourne, so I forgive him for looking so cranky in these photos. 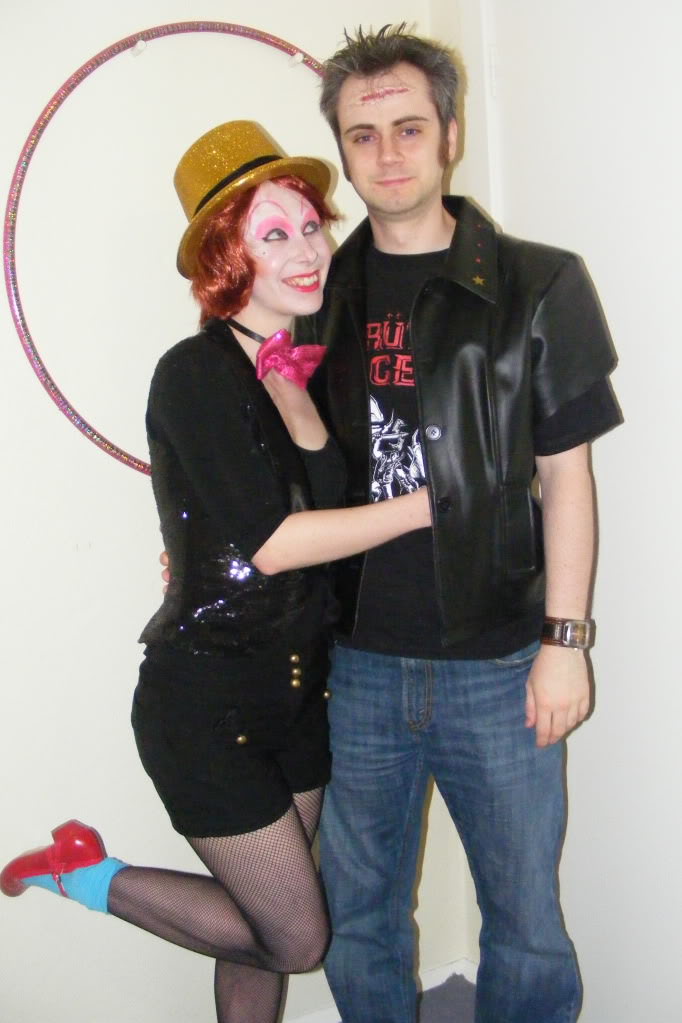 We provided guests with a little showbag filled with all the props that they would need to take part in the audience participation.

– Confetti: to be thrown at Betty and Ralph’s wedding at the beginning of the film and again at Frank and Rocky’s wedding

– Newspaper: to be held over your head when Janet runs from the car through the rain

– Water pistols: to simulate rain during “There’s a Light”

– Candle: to be lit during “There’s a Light”

– Rubber gloves: to be snapped when Frank snaps his gloves

– Party whistle: To be blown during the laboratory scene

– Party hat: to be put on at the same time that Frank puts on his party hat

– Toast: to be thrown in the air when Frank proposes a toast at the dinner table

– Playing cards: to be thrown into the air when Frank sings “cards for sorrow, cards for pain” duing “I’m Going Home”

My DVD has an audience participation prompter, which flashes a subtitle onto the screen to tell you when to use each item.  This was really useful for the people who hadn’t seen Rocky Horror before.

We also indulged in a little verbal participation.  There is a long history of verbal participation within the Rocky Horror fanclubs around the world.  It basically involves the audience calling out verbal responses at various points in the film.  Different fan clubs use different participation scripts, but there are some responses that are universal.  For instance:

– Whenever you hear the name ‘Brad Majors” you should call out “asshole!”

– Whenever you hear the name “Janet Weiss”  you should call out “slut!”

– Whenever you see Columbia’s nipples, you should call out “Peekaboo!”

– When Brad asks Frank N Furter “What have you done with Janet?”  you should respond with “More than you have!”

– Whenever you hear the name “Rocky” you should give a loud, apelike grunt

– When the buzzer on the deep freeze goes off, you should call out “ex-boyfriend alert!”

We also encouraged everyone to make up their own responses, with hilarious results.  We also sang along to the songs and danced the Time Warp.

It was a truly awesome night, and I would like to thank everyone who attended for making it so fantastic.  It was such a success that I’m thinking of making it a bi-annual event.