On Sunday, my friend Sam and I headed to the Australian Centre for the Moving Image to see the Tim Burton exhibition.  As Sam and I are both huge Burton fans, she had bought me tickets to the exhibition for my birthday, and I was very excited to see it.

– Black and white bodysuit from Factorie

– Haematite necklace (gift from my grandmother).

I truly enjoyed wearing this outfit.  I pulled together a kind of soft-goth look, using different elements from various Burton movies.  The hair is a little bit Red Queen, the tights were inspired by Mrs Lovett, the makeup was a little bit Edward Scissorhands and the black and white stripes were a nod to the lovely Mr Burton himself.

The exhibition was utterly wonderful.  I had a fantastic time.  The only problem was that we were not allowed to take photographs!

This means that I will have to describe what we saw, rather than being able to actually show you.  I do have one photo that we took outside the actual exhibition: 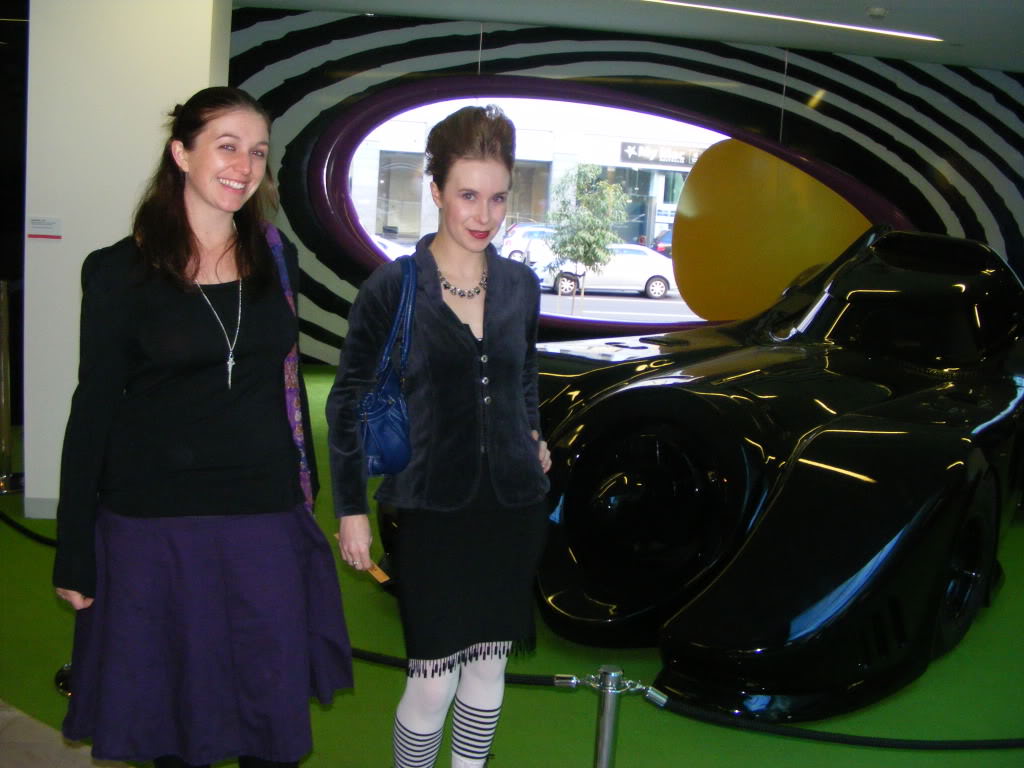 This is Sam and myself standing by the Batmobile.  I love that in every photo I have from this day, Sam is grinning manically.

When we walked into the exhibition, we decended down a flight of stairs that were lit by red spotlights and spotted with swirling black and white spirals.  As we reached the bottom of the stairs, we saw a giant topiary deer, a prop from Edward Scissorhands.  Sam and I could not stop grinning, and several times, I had to manually close my own jaw.  The exhibition is gigantic, and twines around about five galleries.  The first gallery contains mainly original artwork from Burton’s early years as an artist, including a series of morbidly comic sketches.  The exhibition then moves into other galleries, which feature more original artwork, concept art, costumes, puppets and props from Burton’s films.  The collection is amazing.  There is a blacklit hallway filled with peepholes that each disclose a different drawing or puppet, and a maniacal circus installation.  There is so much to see and do, and there is even a little art room for children, stocked with crayons and paper.  Judging from the drawings pinned to the walls, a great many kids have been inspired by what they have seen in the exhibition.

Here are some of the highlights from the day:

– standing by the Edward Scissorhands costume and exclaining “Johnny Depp’s junk has been inside this suit”.

– Seeing the puppets from Vincent, The Nightmare Before Christmas and Corpse Bride

– Marvelling over the detail in the Alice in Wonderland costumes.

– The sketch depicting “a man undressing a woman with his eyes”.

– Realising that my Black and White striped outfit was phospherescent in the blacklit rooms.

– Cackling over the Stain Boy diorama

Thankyou so much to Sam for a lovely day.  The exhibition was everything that I had hpped for and more.  I need to go again immediately.  If you are in Melbourne, you shoudl make a point of checking out the display.