This is a story of a boy, a girl, several cosplayers, a convention and the most awesome t-shirt in the world.

Today Ross and I attended Supanova, a comic book convention which is being held in Melbourne this weekend.  I knew that I needed something pretty special to wear to this event.  Luckily, I have an awesome boyfriend who likes to buy me presents, and last night he presented me with this gem of a t-shirt… 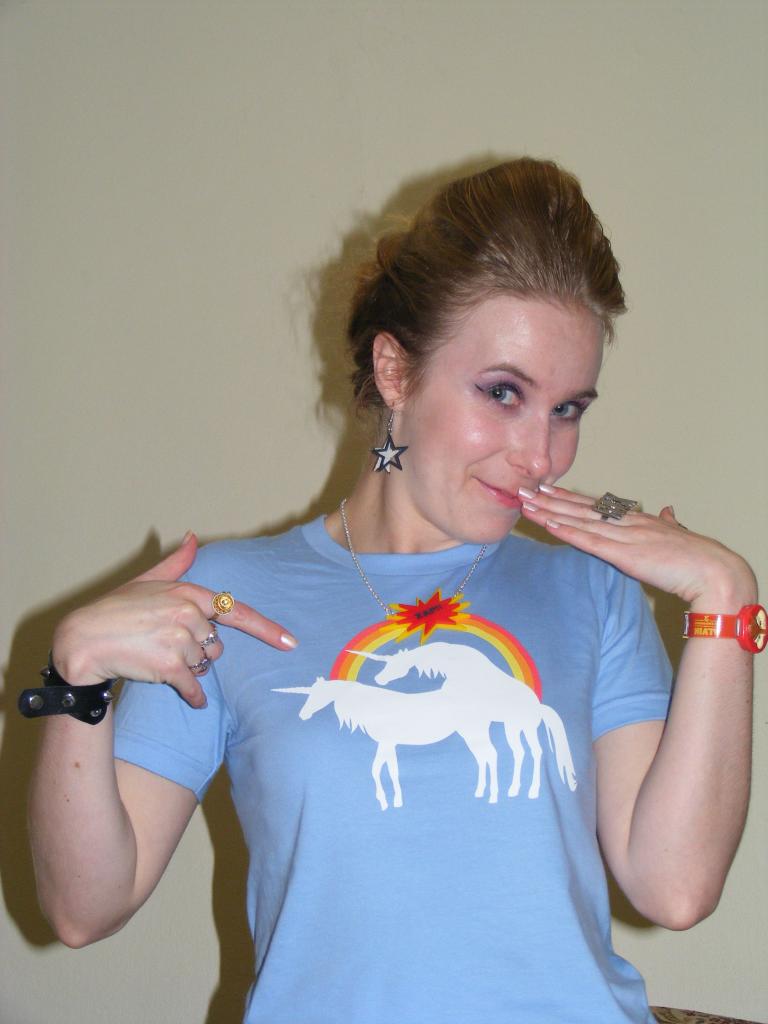 It’s two unicorns, on a rainbow, making love. Is anything cooler that this?  I doubt it.

Anyways, we rocked up to the Melbourne Showgrounds in plenty of time this morning, and then proceeded to shuffle from one queue to another.  I have to say that overall, the event wasn’t particularly well organized, and it was difficult to know where to go to buy tickets, and where to wait in line to see the particular attraction that you were after.  I found that several times, when I asked a staff member for help, they were unable to assist me and had to run off to ask somebody else.  It was pretty poor actually.  I went to Armageddon a few years back and everything there ran like clockwork.

First up, we went into a Q and A session with James Marsters of Buffy the Vampire Slayer fame.  It was fantastic.  He was really funny and down-to-earth and was really happy to answer any question that people threw at him.  I was always a huge fan of Spike, and so it was amazing to be able to see James in person.  When the session was over, he was signing autographs and letting people take pictures with him.  I was keen to line up, but there were about four different lines and nobody seemed to be able to tell me which one I needed to join to get to see James Marsters.  Eventually, we found out that you had to go to this stall and buy an “autograph ticket” for $35, or a “photograph ticket” for $50 if you wanted an autograph or a photo.  I decided that, much as I wanted to meet James, it was simply too much to pay.  Plus the lines were massive.

Ross and I then headed into the main hall where the exhibits and stalls were set up.  There were loads of fantastic shopping opportunities.  I got this gorgeous teacup ring from One Day In Paradise, a Lolita store that has just opened in Melbourne.

The exhibits were pretty good. I met several comic book artists and bought some prints and original artworks from them.  Ross got tonnes of comics, and even met one of his favorite comic book guys, Paul Jenkins.  The cosplayers were milling around everywhere, and there were some excellent costumes floating about.  Although I didn’t get photos of them all.

Like any comic book convention, I found that it was a little…socially awkward.  There was a lot of pushing and shoving and inappropriate contact.  By the end of the day I was covered in other people’s sweat from having people shove past me, and I had at least one guy rub his crotch against me while he was standing behind me.  I also had a guy dressed as Darth Vader ask if I had a sister, because he was looking for two kooky girls to do a three-way with.  Hmmm.  I’m not 100% certain whether or not he was kidding.  All in all, most people  were well behaved.  Here are some photos from throughout the day. 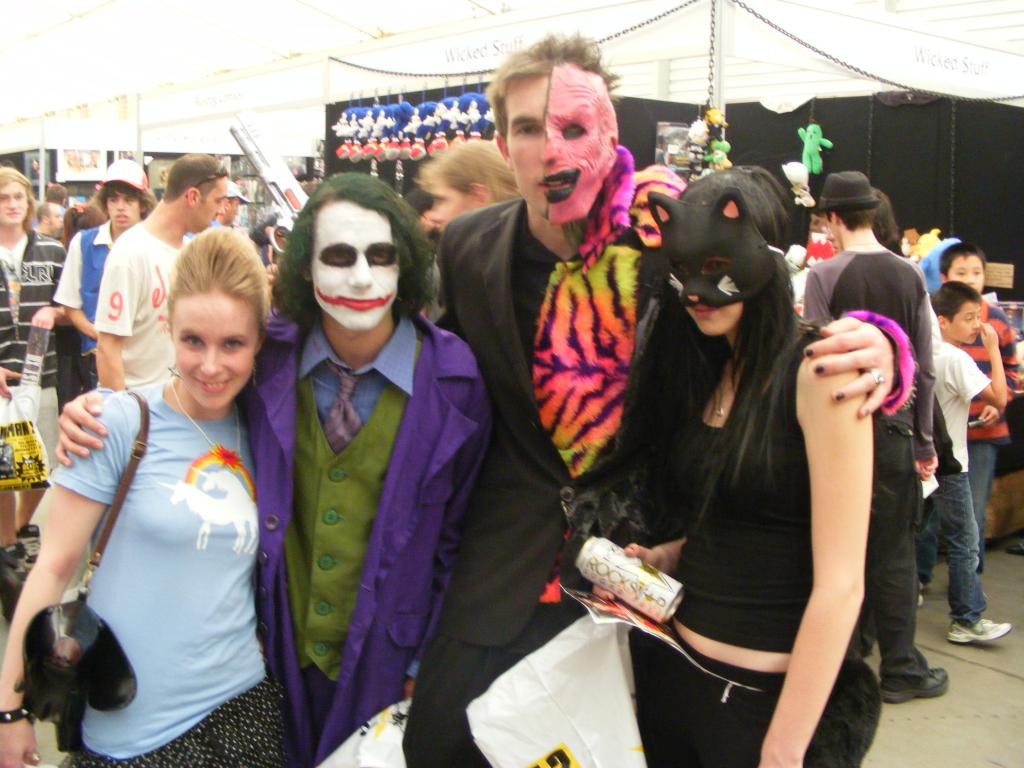 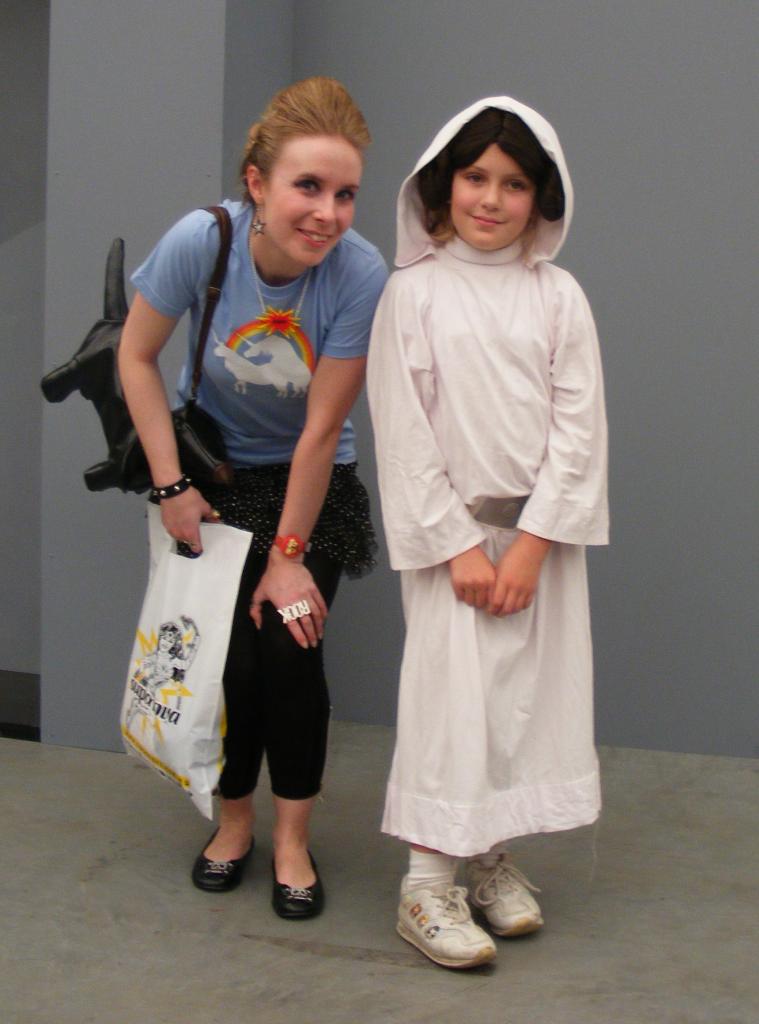 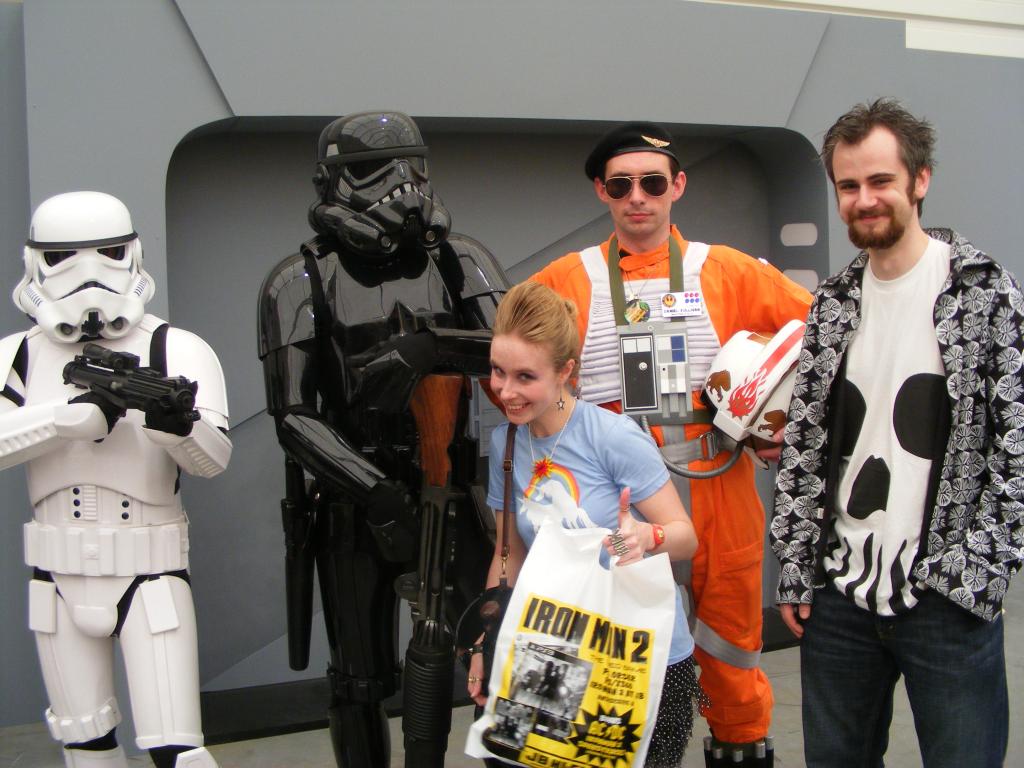 Me, Ross and the Star Wars dudes 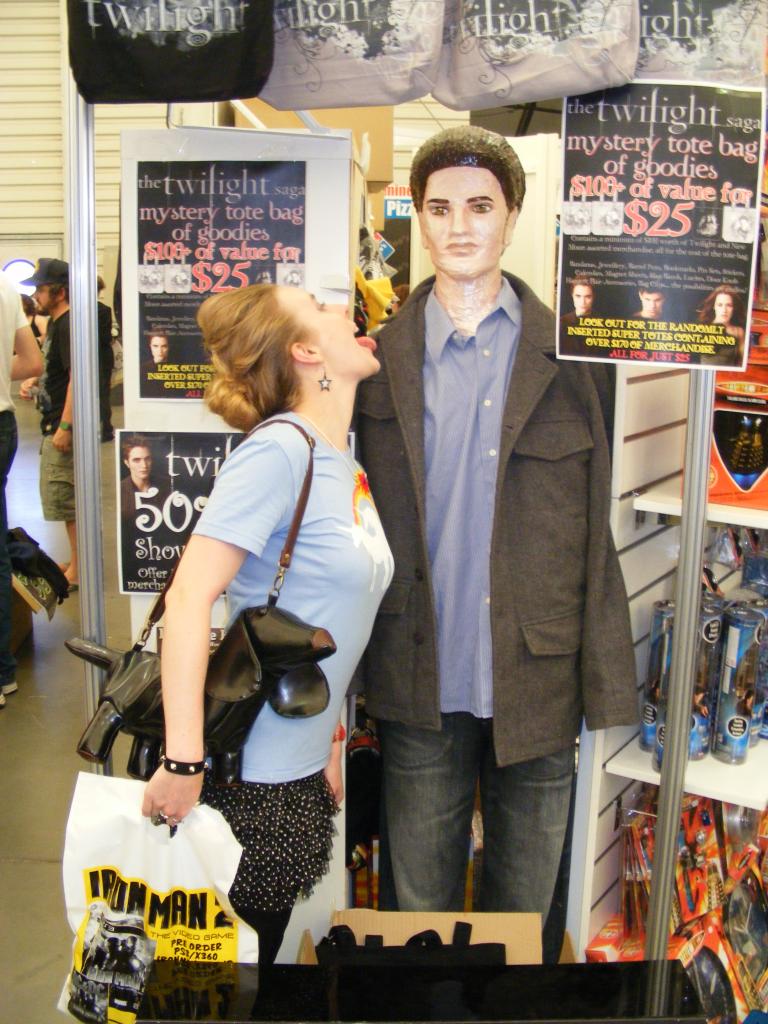 Me licking the REAL  Edward Cullen (or at least, a mannequin of equal acting abilities). 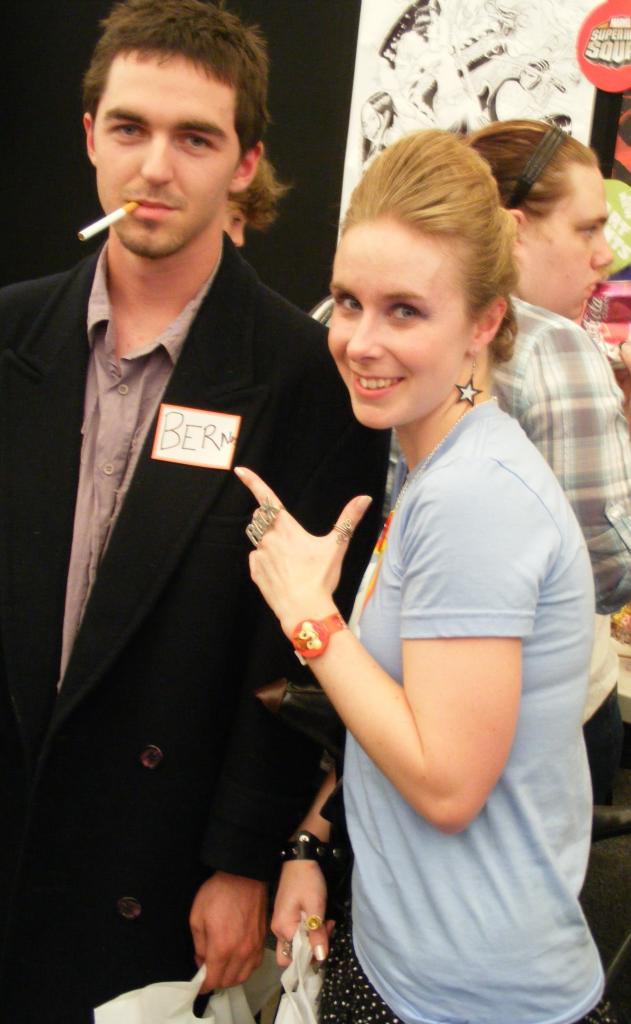 My favorite cosplayer EVER- Bernard Black! 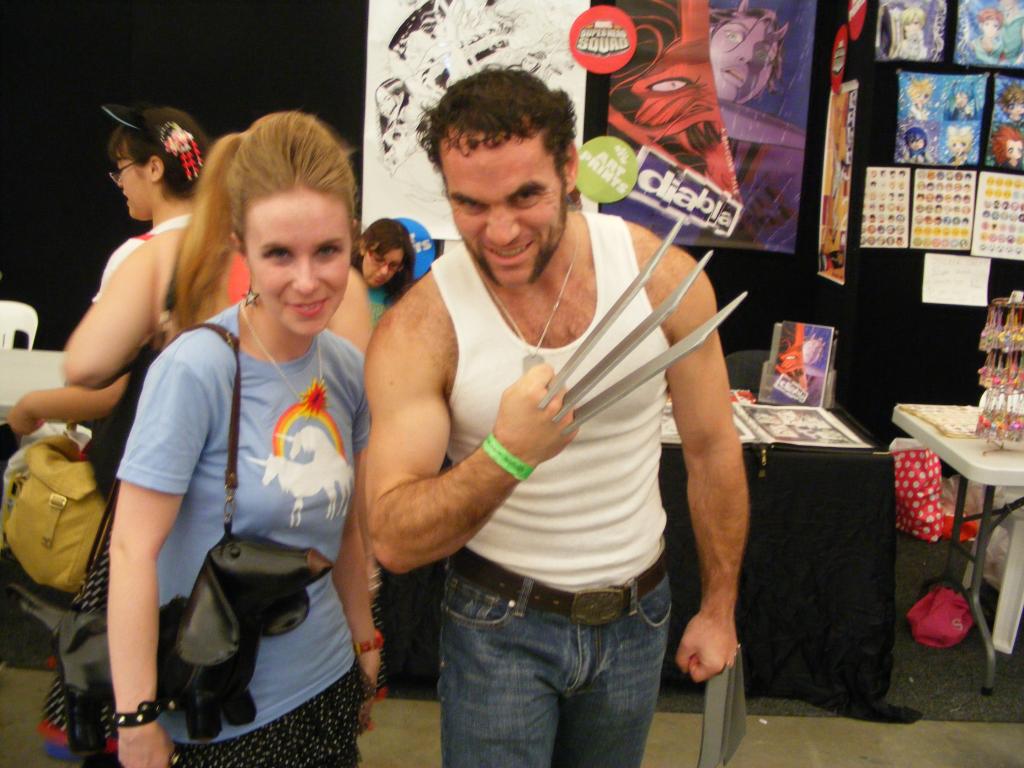 If you guys have a chance, check out Supanova in Melbourne tomorrow at the Melbourne Showgrounds.  Tickets are $25, and if you like comics, comic art, collectables, Lolita fashion or cosplay, you should definitely be there.